With over 50+ years of history, some strange stuff was bound to happen at the big game.

CINCINNATI - Perhaps you're a devotee of the sport who has carved out eight hours from every Sunday solely for football. Maybe you're a casual viewer who's less intrigued by penalties and extra points and more by the nachos and sliders being dished out at your party.

Regardless of where on the football fan spectrum your passion may land, there are championship stories — some tragic and others plain bizarre — that you probably have never heard of.

The one where a fan showered with the Super Bowl champs

During Super Bowl XIII, Terry Bradshaw threw four touchdown passes to lead the Steelers to a 35-31 win over the Cowboys in Miami. But another notable moment came after the game with a fan who was a bit overzealous about his dedication to perysonal hygiene.

Steve Sabol of NFL Films recounted the story to the LA Times’ Sam Farmer in 2010. As a cameraman, Sabol went to the Steelers’ locker room after the game and saw someone he “didn’t recognize.”

“A pasty-white little bald guy — turns out it was a Pittsburgh fan — had gotten into the locker room, taken off all his clothes, and was in there showering with the players,” Sabol recalled.

The fan had managed to somehow sneak past Super Bowl security.

“It was really steamy in the locker room, and I remember having to continually wipe the lens of my camera,” Sabol said. “Every time I’d look up, I’d see this little bald guy in the shower with Joe Greene, Jack Lambert, Dwight White.”

The cameraman said he knew the guy wasn’t a trainer or part of the equipment staff.

“Who the hell was he? It was obvious he wasn’t a player. So I went over to talk to Joe Greene at his locker, and during the course of the interview, this guy comes out of the shower and starts getting dressed in front of a locker near Joe’s. I said, ‘Joe, who is this guy?’ And Joe’s exact words were, ‘I don’t know who... he is.’”

Sabol went on to say that the fan, with “no modesty at all,” then sat in front of Larry Brown’s locker and reporters even started interviewing him about the game. He then got dressed and walked out with an unbelievable story to tell, according to Sabol.

The one where the wide receiver played hungover

In 1967, Green Bay Packers wide receiver Max McGee had caught only four passes in the regular season and was approaching retirement, according to Sports Illustrated.

On the night before the first Super Bowl in history, the 11-year veteran wasn’t planning to play in the game against the Kansas City Chiefs and decided to break curfew, the magazine reported. McGee spent the night out with two flight attendants that he met in the team’s hotel bar, not returning to his hotel room until 6:30 a.m. on game day, according to Sports Illustrated.

Unfortunately for him, the team’s starting wide receiver Boyd Dowler re-injured his shoulder early in the game, and McGee was called in to play by Vince Lombardi, the team’s legendary head coach.

Amazingly, McGee ended up catching the first touchdown pass in Super Bowl history. In total, he caught seven passes for 138 yards and had two touchdowns. The team went on to beat the Chiefs, 35-10. 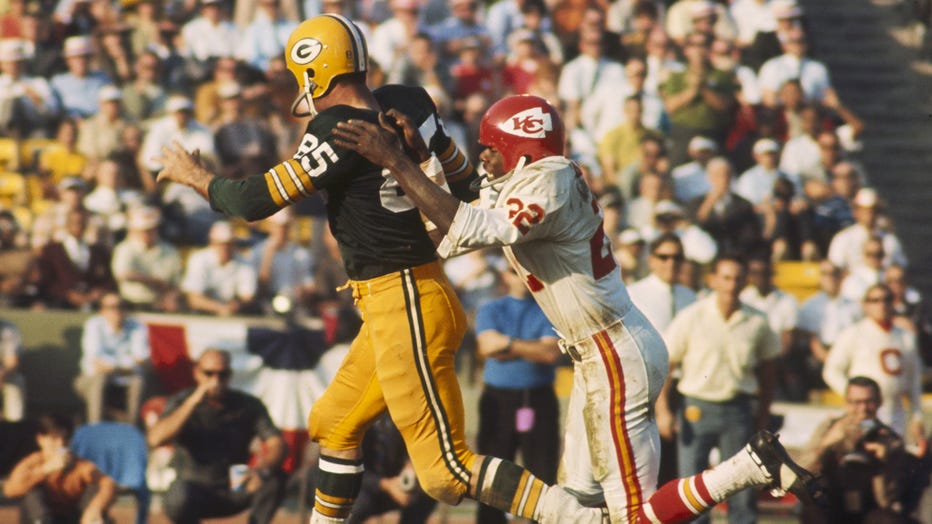 The one where the president tossed a coin via satellite

As a result, Reagan performed a coin toss for Super Bowl XIX via satellite from the White House, hours after taking the oath of office, according to the New York Times. The moment also marked the first time a sitting U.S. president participated in the coin toss ceremony.

Because the inauguration fell on a Sunday, Reagan was sworn in privately and the televised ceremony took place on Jan. 21, the Times reported.

Meanwhile, the San Francisco 49ers went on to defeat the Miami Dolphins, 38-16, in Super Bowl XIX at Stanford Stadium in Palo Alto, California.

The one where a player did cocaine

Thomas "Hollywood" Henderson was a first-round draft pick of the Dallas Cowboys in 1975 and played in multiple Super Bowls. He also had a drug problem that included cocaine, according to the LA Times.

Henderson allegedly played Super Bowl XII in New Orleans against the Denver Broncos high, trading two tickets for an ounce of cocaine and snorting it in a locker room stall before the game, the LA Times reported.

In an interview before Super Bowl XIII against the Pittsburgh Steelers, Henderson famously stirred the pot by claiming the Steelers’ quarterback Terry Bradshaw “couldn’t spell cat if you spotted him the C and the A.”

During that game, Henderson played high once again with liquefied cocaine he sniffed on the sidelines from an inhaler, according to the newspaper, citing his autobiography, “Out of Control: Confessions of an NFL Casualty.”

"Thomas Henderson dramatically changed sports history," a Dallas front-office confidante told Skip Bayless in "God's Coach," his unauthorized biography of Cowboys coach Tom Landry. "He epitomized the Cowboy organization at its peak in 1979. He could party all night and still be the best at his position."

The one where a player went missing

Two days before Super Bowl XXXVII in San Diego, Oakland Raiders’ starting center Barret Robbins said goodnight to his wife, Marisa, and was dropped off at the team hotel before the 11 p.m. curfew, according to Sports Illustrated.

The next morning, Marisa Robbins received a call that her husband hadn’t shown up for a team meeting and was nowhere to be found.

The NFL player had previously been diagnosed with depression in college at Texas Christian University and had suffered from previous episodes, according to the magazine. It wasn’t until Saturday at 8 p.m., on the eve of the biggest game of his life, that Robbins re-appeared at the team hotel, disoriented and confused, Sports Illustrated reported.

Raiders coach Bill Callahan took him off the roster.

Robbins had left his hotel without his cell phone or wallet and took a cab across the border to Tijuana and partied all night, according to HBO’s “Real Sports with Bryant Gumbel.”

“My life was unmanageable. I was completely living in a fantasy world,” Robbins told HBO. “In my mind, we had already won the Super Bowl and we were celebrating. That’s how delusional I was.”

The team ended up losing to the Tampa Bay Buccaneers, 48–21.

Robbins later told HBO’s Real Sports that he tries to sleep through the Super Bowl every year.

“I get depressed on Super Bowl Sunday,” he said, according to Sports Illustrated. “It’s hard for me to watch. I think about it all the time. I hit myself in the head and say ‘Damn, if I just could have done this or would have done that.’”

The one where a player lost his helmet

Thurman Thomas, a former Buffalo Bills running back, was preparing to take the field during Super Bowl XXVI in Minneapolis against the Washington Redskins. But his helmet was not where he left it prior to the coin toss, according to a post on the team’s website, recounting the infamous story.

"I couldn't find it," Thomas said after the game. "I didn't know where it was. For some reason somebody moved it. I was very upset."

Bills equipment manager, Dave Hojnowski, said about five minutes prior to the calling of captains to the field, he knows Thomas put his helmet down in a specific area.

"Thurman used to put his helmet down in the same spot before every game," he said. "It was always on the table where we would keep the drinks. It was right to the left of that behind the bench for the offense.“

Thomas, who Hojnowski recalled as one of the team captains, went out for the coin toss. Afterward, the running back returned to the sideline and went to grab his helmet, but noticed that it was no longer on the table by the drinks behind the benches, according to the Bills’ website.

"So Thurman is looking for where he put it and it's not there," Hojnowski said. "Thurman was frantic running around to all of us saying he couldn't find his helmet."

Soon, up to a half dozen people were searching for the helmet, and backup Kenny Davis was put in to start on offense — as the Bills’ star running back was still not equipped for the game.

The missing helmet was eventually located and Thomas was able to get onto the Super Bowl field.

"I firmly believe that one of his teammates picked up Thurman's helmet thinking it was theirs and walked to the other end of the bench and realized it wasn't his helmet, put it down and then went to find his own."

What crazy and inane and moments from this year's game will become part of championship history? Watch Super Bowl LIV on Sunday, Feb. 2 on FOX.