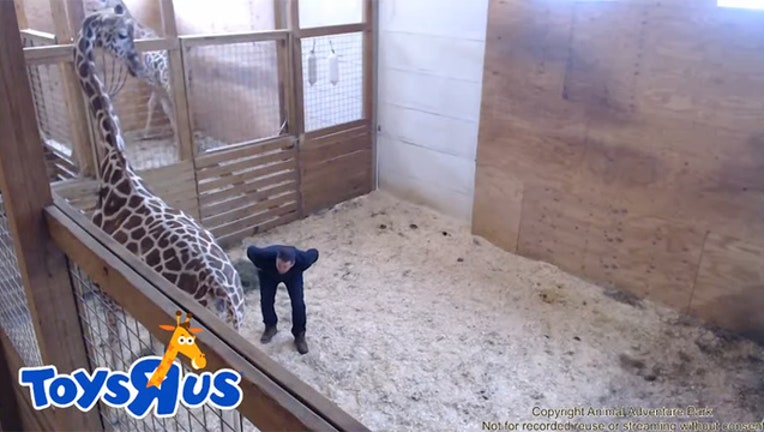 HARPURSVILLE, NY - Animal Adventure Park says April is showing all the signs of imminent birth and they would be shocked if they got through the weekend without their newest addition.

"All observations, behavior, and predictions suggest a calf today, tonight," the park posted on its Facebook page Friday. "This is what we have all been waiting for!" the park wrote.

The world has been actively engaged and watching the Animal Adventure Park's web cam for more than a month since it announced April was approaching her 15th month of pregnancy, the normal gestation period of a giraffe, and was due to give birth to her fourth calf.

This will be the first calf of Oliver, April's mate, who has been in the stall next to April's watching, pacing, and sometimes snuggling up to April when they're in the same stall together.

April and her mate Oliver have become internet sensations since the New York park began streaming live video of her pregnancy last month.  Millions of people have checked in on the giraffe’s progress, many becoming regular fans watching for the latest developments.

The popularity prompted the park to create a website dedicated to April, along with merchandise for her fans.

Zookeeper describes the birth of a giraffe

GIRAFFE FUN FACTS:
• Once the calf’s hooves appear, labor will be over within 30 to 60 minutes
• Full grown giraffes can eat more than 100 pounds of leaves a twigs a day
• Male giraffes are taller and heavier than females
• The knobs on their heads are called ossicones
• Giraffes move both legs on one side of their body as they walk
• They can reach speeds of up to 35 mph
• Giraffes sleep less than two hours a day
• Female giraffes can become pregnant at just 5 years old
• They live up to 25 years in the wild

The park is now producing multiple updates per day on their Facebook page, tracking everything from April’s mood to the dynamic spring weather.