Grandfather leaves final gift for granddaughter before her wedding

A Beaumont nurse helped a patient find the perfect dress for his granddaughter one unsuspecting day, although she didn't realize it at the time. Now, more than a year since the find and months since the wedding, that previous bride is thanking the nurse who helped.

(FOX 2) - A Beaumont nurse didn't know the impact she would leave on a family after one patient checkup. But the day Melissa Doman paid a visit to Gerald Hawkins would be one that would reverberate for years.

And all because Say Yes to the Dress was on the TV.

CLICK HERE TO WATCH THE VIDEO: Grandfather leaves final gift for granddaughter before her wedding

Melissa could relate. She was engaged at the time as well. And while the time they spent lasted barely more than a couple of minutes, the nurse has recommended Becker's Bridal as the place to go for all things dresses. Located in the town of Fowler in Michigan, she got the idea from a book given to her by her mother-in-law.

The book is called "The Magic Room" and was written by Jeffrey Zaslow, the late husband of FOX 2's Sherry Margolis. It chronicles the tales of several brides who made their way through the same local business.

And one of the future brides that would find herself using the same dressing rooms is Megan Fleischer Giorgi - the granddaughter of Hawkins who ordered the book after talking to Doman. Megan read it and knew it was the place she needed to visit.

Of the thousands of available dresses in the store, Megan picked one of the first ones she tried on.

"I got to step into the magic room and it was just everything you could imagine, not necessarily because it was all just bright lights and sparkles, but because I came there on a journey because of Melissa and because of my papa," she said.

Hawkins died in July of 2018, before his granddaughter got married. But not before leaving one final message for Megan - an inscription on the book gifted to the bride and her fiance.

"It says "And to Megan and Franco, with our love and happiness for your marriage on June 22, 2019. If you both would read this book about the Magic Room. Love Papa and Gigi,'" said Megan. "Simple and sweet just like he was." 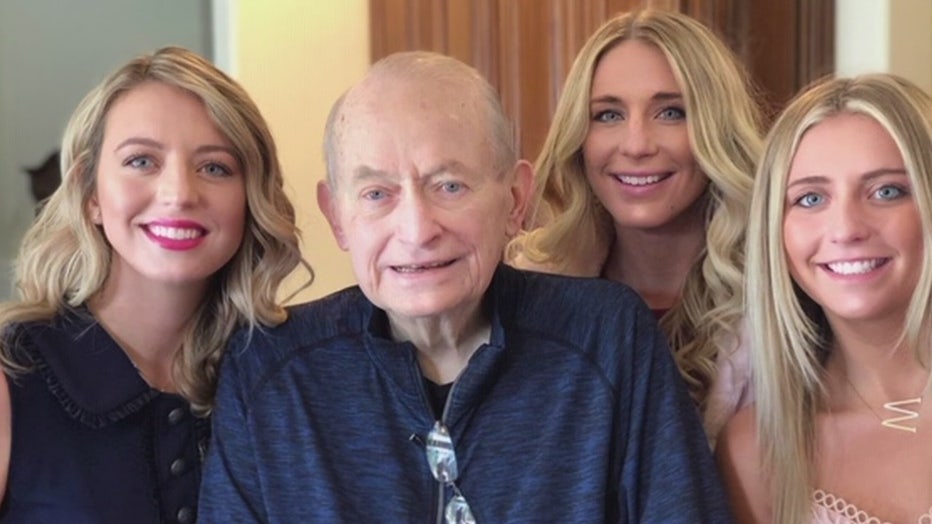 While the wedding has passed, the meeting between Megan and the nurse who unsuspecting matchmaker had yet to happen - until mid-December.

"You just gave me a memory for my whole lifetime," Megan told Melissa after embracing each other.

And for that family, that memory came accompanied with a sentiment of kindness they won't forget.

"It's something I definitely try to do every day now because you never know what you could do with kindness," said Megan.