WASHINGTON - President Joe Biden and Vice President Kamala Harris addressed the nation Wednesday after their historic inauguration, making an appeal for hope and unity, and asking weary Americans to "see beyond crises."

The event opened with a performance by folk legend musician Bruce Springsteen. The inaugural special, titled "Celebrating America," echoed Biden’s calls for unity amid a difficult time in the nation’s history.

Biden gave brief remarks during the special, repeating calls for Americans to come together and heal. He gave thanks to Americans and pressed the importance of democracy.

"As I said earlier today, we have learned again that democracy is precious and because of you democracy has prevailed," Biden said.

"That’s why Jill and I, Kamala and Doug wanted to make sure our inauguration was not about us, but you, the American people," Biden said. "To overcome the challenges in front of us requires the most elusive of all things in a democracy: unity."

Harris talked about the power of "American aspiration" in her first speech to the nation as vice president.

With the Washington Monument lit up behind her Wednesday night, Harris called on Americans to remember "we are undaunted in our belief that we shall overcome, that we will rise up."

She also cast her ascension as the first female vice president as a demonstration of the nation’s character.

Borrowing a line she frequently used on the campaign trail, she said, "We not only see what has been — we see what can be."

Harris gave a nod to American scientists, parents and teachers who are persevering through the coronavirus pandemic and encouraged people to "see beyond crises."

Earlier that day during his inauguration, Biden declared, "democracy has prevailed" at the same location that had been attacked by a pro-Trump mob just two weeks earlier.

Joined by first lady Jill Biden and family, Biden entered the White House for the first time as president to begin the work of a new administration and confront a historic confluence of crises.

Harris, who also took the oath of office, blazed a new path for women and minorities with her ascension to role. She's the first female, Black and Asian vice president in U.S. history.

Soon after entering the Oval Office, Biden began working, with a stack of executive orders on immigration and other matters awaiting his signature. Biden wore a mask while seated behind the Resolute Desk with early Wednesday evening. He said there was "no time to start like today."

The first order Biden signed was related to the coronavirus pandemic. He also signed an order reentering the U.S. into the Paris climate accord.

While his predecessor broke long-standing practice by skipping Biden’s inauguration, Trump did follow through on one tradition — a letter left behind for Biden.

Biden said Trump "wrote a very generous letter," but said he wouldn't reveal its contents until he had a chance to speak with Trump.

Jen Psaki said that she will bring truth and transparency to the White House briefing room, a clear reference to her predecessors under Trump, and announced that she would hold press briefings daily, a departure from the sporadic cadence of briefings during the Trump administration.

She said Biden will call Canadian Prime Minister Justin Trudeau on Friday, the first call with a foreign leader after he took the oath of office. That call will be regarding relations between the United States and Canada as well as the status of the Keystone XL oil pipeline, whose permitting Biden revoked in one of his first acts as president.

Psaki said Biden’s first round of calls to foreign leaders will be with allies, adding that the new president plans to repair damaged global relationships.

You can watch live coverage of Inauguration Day 2021 from NewsNOW from FOX throughout the day in the video player above.

Watch President Joe Biden’s inauguration speech that he delivered after he was sworn-in on Capitol Hill on Wednesday, Jan. 20, 2021.

Biden took the stage for his inaugural address around noon Wednesday. In his first remarks as president, he said his swearing-in marks a day of "history and hope" and that the country has "learned again that democracy is precious."

Biden called on Americans to overcome their divisions, declaring in his first address in office that "without unity, there is no peace." He referred to America’s political climate as an "uncivil war," and called for the end of divisions like city vs. rural and conservative vs. liberal.

He also pledged that he would be honest with the country as it continues to confront difficulties, saying that leaders have an obligation "to defend the truth and defeat the lies." He asked even those who did not vote for him to give him a chance.

"Hear me out as we move forward," Biden said.

President Joe Biden and Vice President Kamala Harris were joined by former presidents Barack Obama, George W. Bush and Bill Clinton and their spouses at a wreath-laying ceremony at the Tomb of the Unknown Soldier at Arlington National Cemetery.

"We must end this uncivil war that pits red against blue," he added.

Biden took the oath of office, administered by Chief Justice John Roberts, using a Bible that has been in his family since 1893. According to the Associated Press, it’s the same five-inch thick Bible he used during his vice presidential inaugurations in 2009 and 2013. 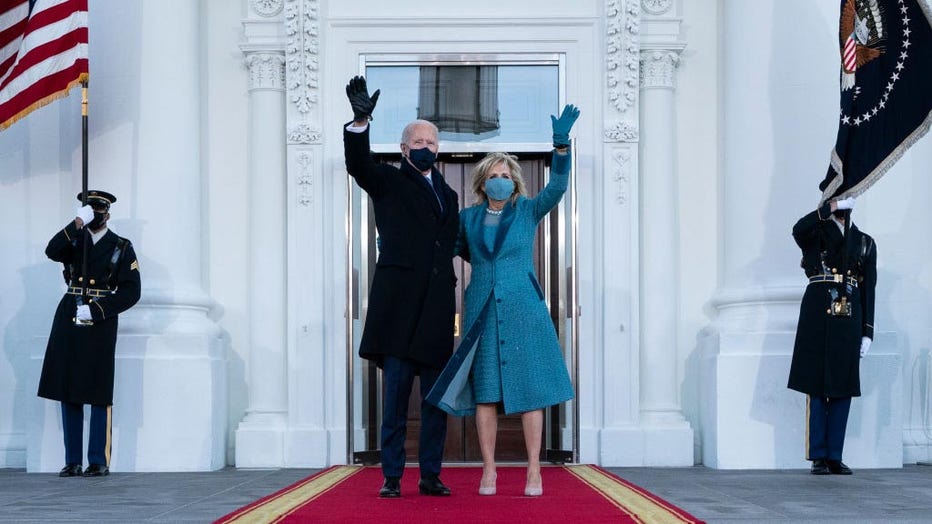 President Joe Biden and first lady Dr. Jill Biden wave as they arrive at the North Portico of the White House, on Jan. 20, 2021, in Washington, D.C. During today's inauguration ceremony Joe Biden became the 46th president of the United States. (Photo

Biden’s late son, Beau Biden, used the same Bible when he was sworn in as Delaware’s attorney general.

The Inauguration of Joe Biden and Kamala Harris

Biden was sworn in at perhaps the most difficult starting point for a president since Franklin Roosevelt began his first term by assuring a nation scarred by the Great Depression that "we have nothing to fear but fear itself."

The U.S. Secret Service tightened security in and around the Capitol a week early in preparation.

Washington, D.C.‘s city center was essentially on lockdown with streets blocked, high fencing installed and tens of thousands of National Guard and other law enforcement officers stationed around the area. About 25,000 members of the National Guard streamed into Washington from across the country — at least two-and-a-half times the number for previous inaugurals.

The heightened security came with a fear that has gripped Washington since the deadly Jan. 6 insurrection at the U.S. Capitol by pro-Trump rioters. Five people died, including a Capitol Police officer.

But the inauguration went off without a hitch, with no major security incidents reported by authorities.

In his final act, Trump declined to attend Biden’s inauguration and instead gave his farewell address at Joint Base Andrews in Maryland before departing to Florida.

He became the first president to not attend his successor's inauguration in more than a century. But former vice president Mike Pence and other former presidents upheld tradition and joined the new administration at the Capitol.

RELATED: 'It's been a great honor': Trump departs White House in final hours of presidency

Trump departed from Washington Wednesday morning in a grand airbase ceremony that he helped plan himself. Pence did not attend Trump’s departure ceremony. 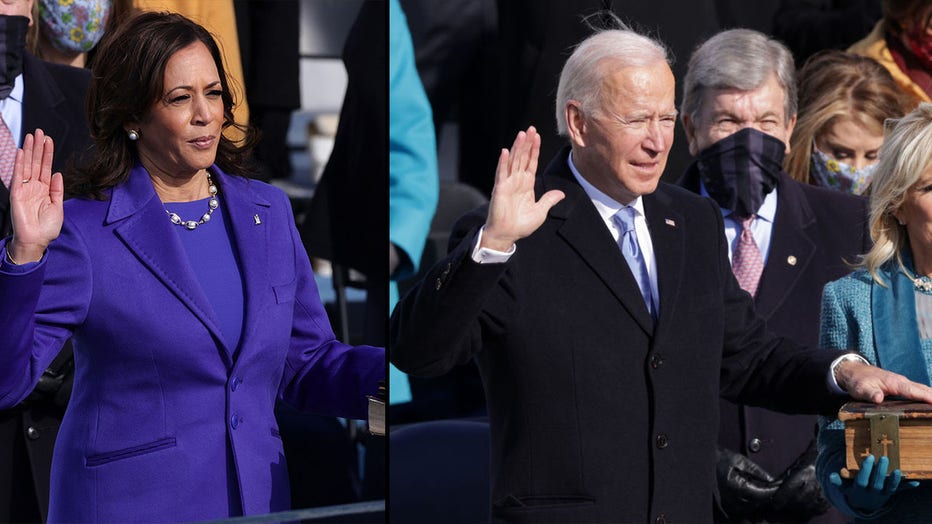 Following the official swearing-in ceremony for Biden and Harris, more events took place throughout the day.

Biden and Harris completed the traditional "Pass in Review" inspection of troops from all service branches, a ritual that symbolizes the peaceful transfer of power to a new Commander in Chief.

From there, Biden and first lady Jill Biden, along with Harris and second gentleman Douglas Emhoff, visited Arlington National Cemetery to participate in a wreath-laying ceremony at the Tomb of the Unknown Soldier. They were joined by former presidents and first ladies Barack and Michelle Obama, George W. and Laura Bush, and Bill and Hillary Clinton.

Biden then received a presidential escort, with each branch of military represented. Drumlines from the University of Delaware and Howard University, the alma maters of Biden and Harris, kicked off the event.

The Biden family then walked the remainder of an abbreviated route to the White House, with the president wearing his protective mask amid sounds of "Hail to the Chief."

The typical Inauguration Day parade to honor the new president was mostly virtual this year due to the ongoing coronavirus pandemic and security concerns following the Capitol riot.

The "Virtual Parade Across America" was televised and featured performances from around the country that highlight the diversity, heritage, and resilience in all 56 states and territories.

There was no inaugural ball Wednesday night for Biden, Harris and their spouses to dance the night away. Rather, the prime-time special featured remarks from them both, as well as several musical performances, including from Demi Lovato, Jon Bon Jovi and Katy Perry.

A dazzling fireworks display over the National Mall closed out the event.

This story was reported from Los Angeles, Detroit, and Atlanta. The Associated Press contributed.