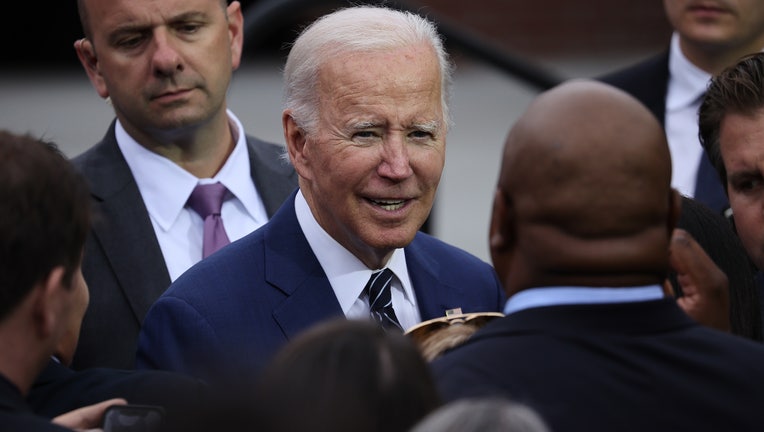 PORTLAND, Ore. - President Joe Biden strode into the telephone bank at a crowded union hall and eagerly began making calls and eating doughnuts — one frosted, one glazed — as he tries every page in the political playbook to deliver votes for Democrats.

Before leaving Portland on Saturday, the president attended a union hall reception for Kotek as he tried to boost her chances in a three-way race that could cost Democrats a reliably blue governor's seat. He also gave a speech at a community center, warning that his administration's progress "goes away, gone" if Republicans take control of Congress in the midterm elections.

It was the final stop on a four-day swing through Oregon, California and Colorado that has encapsulated Biden's strategy for turning out voters on Election Day, Nov. 8: flex the levers of government to help boost candidates, promote an agenda aimed at strengthening an uncertain economy and haul in campaign cash.

And this: show up for candidates when Biden can be helpful, steer clear of places where a visit from a president with approval ratings under 50% isn’t necessarily a good thing.

Throughout the trip, Biden had to compete for the spotlight and contend with a troubling new inflation report and rising gas prices.

"Folks are still struggling. We can’t kid ourselves about that," Biden said Saturday.

He touted Democratic legislation that he says will fight climate change with clean energy incentives and limit the cost of prescription drugs, saying that "we’re fighting for folks who need our help."

In Oregon, Democratic officials hope that Biden can help consolidate the party’s support behind Kotek. The party is in danger of losing the governor’s race in the traditional Democratic stronghold as Betsy Johnson — who has quit both the Democratic and Republican parties — has run a well-financed race against Kotek and the GOP nominee Christine Drazan. 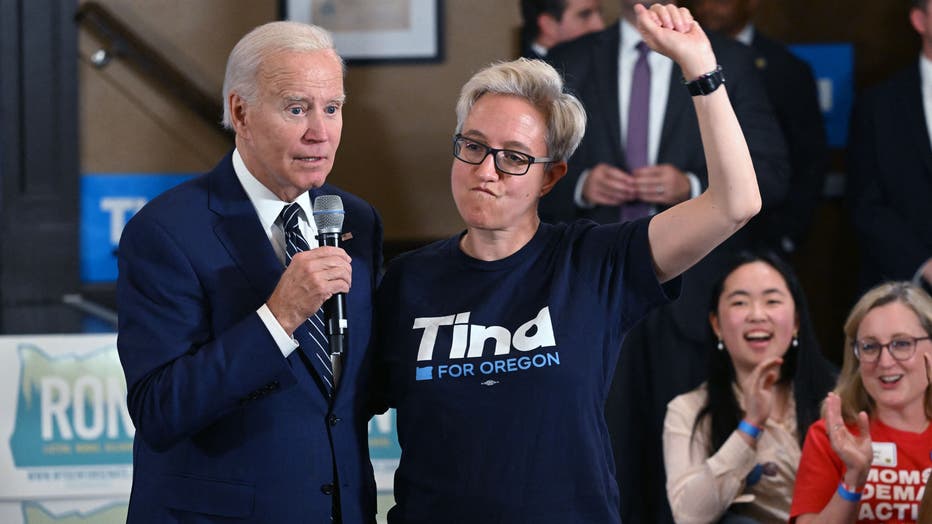 The settings throughout the president's trip were tailor-made for him.

In Los Angeles on Thursday, at a construction site for an extension on the city’s subway line, he spoke about his massive infrastructure law. Giant cranes rose up behind him as he stood before bulldozers and excavators. Many on hand were hard-hat workers in construction orange.

RELATED: Voters in key battleground states will decide on ballot proposals that could reshape voting rights in 2024

"When you see these projects in your neighborhood -- cranes going up, shovels in the ground, lives being changed -- I want you to feel the way I do: pride," Biden said. "Pride in what we can do when we do it together. This is what I mean when I say we’re building a better America."

But his remarks came as the government reported that consumer prices, excluding volatile food and energy costs, jumped 6.6% in September from a year ago — the fastest such pace in four decades. Biden acknowledged that people were being "squeezed by the cost of living. It’s been true for years, and folks don’t need a report to tell them they’re being squeezed."

Democratic candidates have been far more likely to appear with Biden at official White House events underscoring their achievements than at overt campaign events. In California, Biden was joined by state lawmakers and the city's mayor, and he called them out individually. Rep. Karen Bass, who is running for mayor of Los Angeles, made a takeout run with Biden to a taco shop.

President Joe Biden arrived in Portland, Oregon for a visit ahead of the midterm elections next month. President Biden spoke at a campaign event for Tina Kotek, the Democratic nominee for governor of Oregon in the 2022 election. His stop in Oregon caps off a three-day West Coast tour which included visits to Colorado and California.

In Colorado, the president designated the first national monument of his administration at Camp Hale, a World War II-era training site, with a group of Democrats by his side. His audience in a canyon of stunning views, tall pines and bright yellow aspens included Sen. Michael Bennet, who is facing a tough reelection campaign and had worked for the new monument. Democrats hope the designation, popular in the state, will boost Bennet's numbers.

Early voting is underway in California and begins next week in Oregon and Colorado. The president notably stayed away from states where his presence could hurt Democrats, so far skipping Nevada and Arizona, where Democratic senators are tough races.

Democrats are trying to retain power in the face of widespread economic uncertainty and the traditional midterm headwinds against the party in power. Republicans, aiming to regain the House and Senate, think they can capitalize on gas prices, inflation and the economy.

During his taco stop, Biden’s chicken quesadilla order ran to $16.45, but he handed the clerk $60 and asked him to use the change to pay the next patron’s bill.

It was the kind of personal connection Biden loves. But while the moment was unfolding, the headlines in Los Angeles focused on a bitter City Council clash over racist remarks, while in Washington, it was all about how the House voted to subpoena former President Donald Trump on his role in the Jan. 6 insurrection.