LANSING, Mich. (FOX 2) - Michigan Lt. Gov. Garlin Gilchrist and House Speaker Joe Tate are celebrating a historic moment – it's the first time in state history that Black men have led both chambers of the Legislature.

"It’s also a huge responsibility I think that we have. We stand on the shoulders of others. There have been African-Americans that have been blazing this trail for decades, for centuries since the founding of this country. So, understand the responsibility that we are in this position, but we have work to do," Tate said.

Tate is new to his role, while Gilchrist is in his second term. 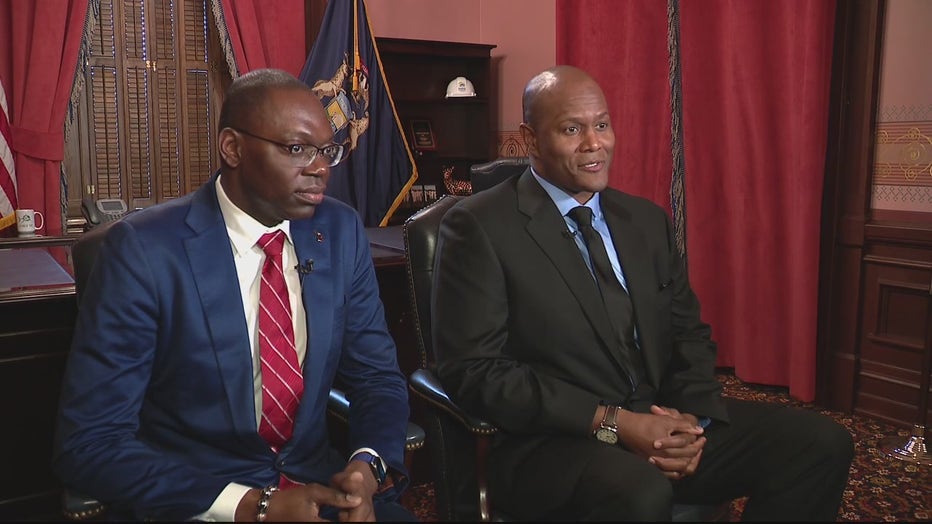 "Representation matters and I think that what we’ve proven in our government in the last four years is that representation leads to better and different and more effective policies and I think with Speaker Tate’s we will see the House of Representatives in concert with Senate Majority Leader Winnie Brinks, first woman to hold her position in leading a legislative chamber here in Lansing, we have an opportunity to deliver for people in a unique way," Gilchrist said.

As they headed to their respective chambers in the first week of the new session, action is aimed at expanding the Earned Income Tax Credit, restoring wage and labor policies, and scrapping the retirement tax.

Meanwhile, House Republicans released their own economic plans this week. They said theirs will more than triple the Earned Income Tax Credit for workers and increase savings for seniors.

Minority Leader Matt Hall of West Michigan said in a statement: "As House Tax Policy chair last term, I prioritized tax cuts for the people, although the governor vetoed multiple bipartisan relief plans. As we begin a new year in the Legislature, let’s start by delivering tax relief to workers and seniors."

"I’m excited that the minority is looking into this and is focused on this, and we will be leading. Again, it will be bipartisan in nature, but we want to make sure we hit the ground running to ensure that this gets to the families," Tate said.

Perhaps it could come as Republicans work to defend against efforts by Democrats to do away with Michigan’s right-to-work laws, which is on the agenda.

"We understand the detrimental impacts that right to work, and other legislation has had that have cut workers knees out. We want to make sure that we are looking at and laying down a path to ensure that workers are not only supported…but they can see how their value is being played out and ensuring that helps us grow our economy as well too," Tate said.