It didn't take long, but Mike Bloomberg has already outspent every candidate from the 2016 primary race in Michigan combined on TV advertising.

Since November 2019, Bloomberg has shelled out almost $11.8 million on 50 different ads that have run more than 22,000 times, according to Michigan Campaign Finance Network (MCFN), which examined data from Advertising Analytics. That's a million dollars more than the total spent in Michigan during the 2016 primary election cycle.

No other presidential candidate this cycle, aside from Billionaire Tom Steyer, has spent even a fraction of what Bloomberg has spent. Senators Bernie Sanders (I-Vermont) and Elizabeth Warren (D-Massachusetts) have spent $312,000 and $606,000 on TV ads in Michigan, respectfully. The ads began running late last week. 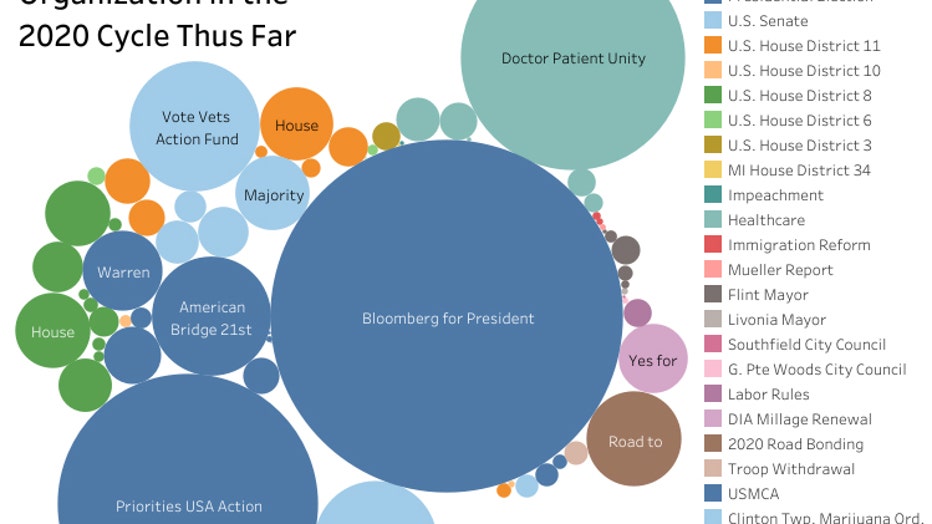 Steyer, a wealthy environmentalist and philanthropist who self-funded his own campaign before dropping out after a third-place finish in the South Carolina Primary on Saturday ran ads about 1,600 times through January. However, his spending totals are unavailable, reports the MCFN.

Even as political elections have grown more expensive, the 2020 race is seeing an unprecedented amount of money being spent. In a political spending projection conducted by Advertising Analytics, the firm estimated approximately $6 billion would be spent in the 2020 race. Michigan residents can anticipate a big chunk of that money will be spent here, due to Michigan's swing-state status.

That doesn't just mean broadcast, radio and cable advertisements, however. Taking up an increasingly larger slice of the advertising pie is digital spending. An almost nonexistent metric in 2016, about $740 million was spent on digital video advertising in 2018. In 2020, ad spending is expected to more than double to $1.6 billion.

While this realm is yet to see the bulk of spending to come, both Bloomberg and President Donald Trump have begun spending money on Facebook advertising. Over the last 90 days in Michigan on Facebook, Bloomberg has spent $2.9 million, while Trump has spent $290,000.

In addition to candidate spending, the MCFN also reported on the presence of dark money spending in Michigan advertising as well. Groups like Priorities USA Action, an anti-Trump Super PAC, and Presidential Coalition, a pro-Trump Super PAC, are also contributing to a massive amount of spending. Most of the money being spent is coming from anti-Trump groups, data from Advertising Analytics and compiled by the MCFN shows.

The Michigan Campaign Finance Network contributed to this report.