Rosemary Myers, director of the "Bluey" live stage show touring across the U.S., told FOX Television Stations about the experience of turning a huge animated TV series into a live theater performance.

NEW YORK - "Bluey," the Emmy Award-winning animated children’s show, is going on its first-ever live tour across the United States.

The television series follows the adventures of Bluey, a lovable 6-year-old Blue Heeler puppy who lives with her dad, Bandit, mum, Chilli, and 4-year-old little sister, Bingo. The show is produced in Brisbane, Australia, which inspires the show’s setting, and is distributed worldwide by BBC Studios.

"Bluey" is often praised for its ability to speak honestly about parenting and childhood, winning an International Emmy Kids Award in 2020 for the best preschool program.

Since its launch in 2018, the animated series has enjoyed critical acclaim — quickly becoming a hit in Australia and growing into a worldwide phenomenon. "Bluey" now airs in more than 60 countries, and in the U.S., the series airs on Disney+, Disney Junior, and The Disney Channel.

Now, the theatrical adaptation, called "Bluey’s Big Play," is officially embarking on a North American tour through the rest of 2022 and into 2023. The 56-minute stage performance was written by the television show’s creator, Joe Brumm, and features new music by "Bluey" composer Joff Bush.

"I think it actually just captures the joy of the family and just this stuff that is all around us, but sometimes we just really forget to savor and appreciate," Rosemary Myers, director of the live theater show, told FOX Television Stations.

"This is a show that is very beloved by people," she added. "It’s a big responsibility because (children) really believe they’re in the room with Bluey and Bingo." 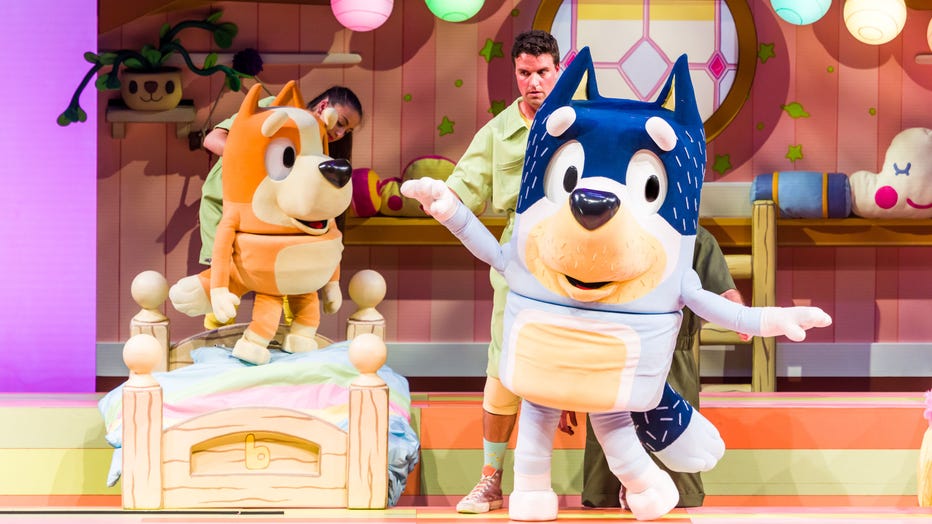 Myers first became aware of "Bluey" from her young nieces who were watching the television show in Australia and "immediately became a fan." The seven-minute episodes often highlight the strange and wonderful world of a child’s imagination, as well as the creative games Bluey and Bingo play with their parents and friends.

While made for children, many episodes often speak to adults, too.

In one (very realistic) episode called "Takeaway," Bluey, Bingo, and their dad are forced to wait in front of a restaurant for a to-go order as the kids become restless for entertainment — wreaking havoc on things around them. Trying to get an errand done with young kids can sometimes test one’s patience, as is the case for Bandit, but the episode ends with a sweet lesson about seizing the moment to act carefree as a child.

In another particularly beautiful episode called "Sleepytime," Bingo bedhops at nighttime while the rest of the family tries to get some sleep. It simultaneously follows Bingo’s dream, as she and her stuffed animal Floppy have an adventure through space. Touching on themes like separation anxiety, parenthood, and the growing independence of a child — as well as the inclusion of Holst's "Jupiter" adding a magical soundscape — viewers often admit to wiping tears from their eyes.

"It’s pretty special to make a show that your preschooler and you can get equal joy from. I think we really tried to take that ethos into the live show as well," Myers said.

WATCH FREE ON TUBI: "Outlander" star Sam Heughan in family romance "A Princess for Christmas" — get the app 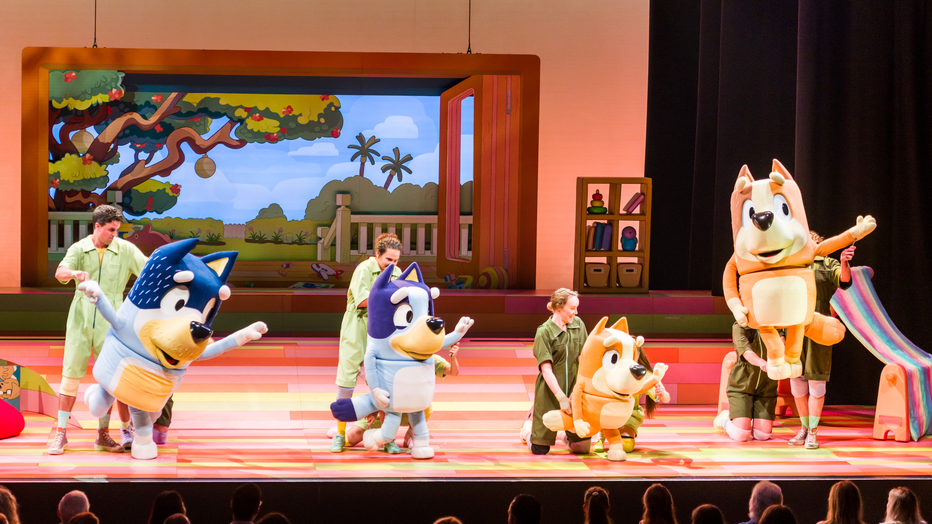 Brumm, the mind behind the writing of "Bluey" on television, crafted a new, original story for the live show — the first play he’d ever written. "Bluey’s Big Play" is a story about sisters and was inspired by Brumm watching his own daughters.

"It’s set in the house, so we get to see all the different locations that we love," Myers explained of the live show. "I think Joe (Brumm) has done a good job of putting enough of the things we love about ‘Bluey’... featured into the storyline."

Rather than cast members dressed in animal suits and giant heads, "Bluey’s Big Play" uses large puppets to bring the characters to life and give them more "range of expression." Each is manipulated by puppeteers who are fully visible to the audience.

"We really wanted to make sure that the transition onto the stage had the same artistic merit as the animation does," Myers explained. "There’s a lot of artistry in how they manipulate the puppets. And it’s quite funny because kids don’t really see the puppeteers — even though we don’t hide them at all — they just watch the puppets."

The live show made its original debut in Australia and was performed 447 times across 65 venues, including the Sydney Opera House.

"To have the show over here in America, it’s quite mind-blowing for all of us, and opening at Madison Square Garden," Myers said. "There’s a lot of exhilaration in the team being here."

Myers said she hopes the main takeaway of "Bluey’s Big Play" is for families to experience the theater together "and take away that joy" as they leave.

"I’ve been doing this for a long time, and you just never tire of seeing people enjoy a live show," Myers said.

Visit blueylive.com to see the full tour schedule and to purchase tickets.

Another gem for families: "The Secret of NIMH," streaming free on Tubi

Animal testing, a brutal struggle between rival rat factions, a widowed mom with a sick kid and a potentially lethal housing crisis, plus an extremely creepy owl voiced by legendary character actor John Carradine, all in a movie somewhat inexplicably rated G. It's difficult to know what kids accustomed to the fast-paced digital animation of the 21st century will make of the hand-drawn "NIMH" — though anyone with an appreciation for the classic Disney cartoons might see how it fits just to the side of the Disney canon. In some ways, the movies Don Bluth made in the 1980s, including "NIMH," "An American Tail" and "The Land Before Time," feel like an alternate history of Disney: Here’s what those animators might have gotten up to if they hadn’t been floundering for much of the decade. Read the rest of film critic Jesse Hassenger's retrospective. Rated G. 82 minutes. Dir: Don Bluth. Featuring: Elizabeth Hartman, Dom DeLuise, Peter Strauss, Arthur Malet, Derek Jacobi, Paul Shenar, John Carradine, Hermione Baddeley, Shannen Doherty, Wil Wheaton, Ina Fried.

How to stream "Bluey" at home

All three seasons of Bluey are streaming on Disney+ in the United States . Plans start at $7.99/month or $79.99 annually; a bundle with ESPN+ and ad-free Hulu is also available.