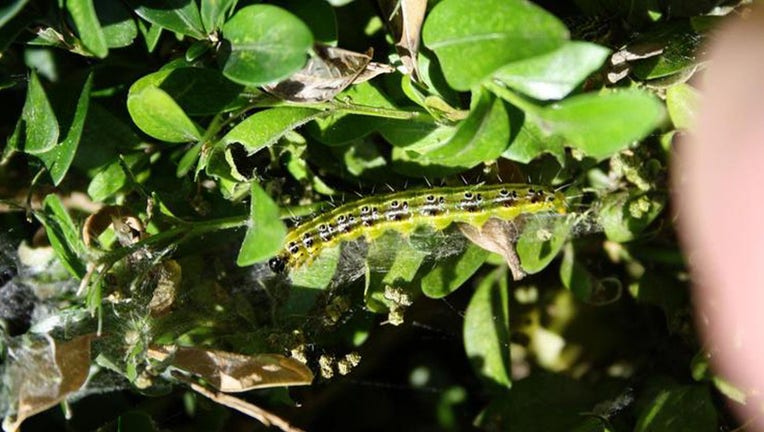 A box tree moth in caterpillar form. Photo courtesy of Bugwood.org. Picture photographed by Ferenc Lakatos at the University of Sopron.

(FOX 2) - One of Michigan's more popular shrubs could be facing a new threat soon.

Boxwood shrubs are hardy, versatile, and remain green year round for homeowners that plant the bucolic foliage. It's likely why the plant is so common around American homes. But creeping concerns over the discovery of an invasive moth that feeds exclusively on boxwood shrubs is worrying insect specialists.

"If this arrives, it could defoliate up to 75% of boxwoods," said David Lowenstein, a consumer horticulture educator at Michigan State University Extension.

Lowenstein says that figure is backed up by the carnage the box tree moth caused when it found its way from its native homeland into Europe. First discovered in Germany in 2007, it has destroyed an estimated three-quarters of all boxwood shrubs in Europe to date.

Lowenstein warns if the insect establishes itself in the U.S., American shrubs could face similar destruction.

The Box Tree Moth is native to East Asia. When it starts out as a caterpillar, it has a lime green color with a shiny black head. When it morphs into a moth, its wings are colored a vibrant white or brown. But homeowners won't need to see the physical insect to know it's ravishing their plants.

Instead, just look at the leaves. Evidence of them being chewed on will be a sign. The caterpillars will eat the foliage before moving onto the bark. What's left is a webbing from caterpillar silk.

So far, this isn't the case. Evidence of the invasive insect was first reported in 2021 in the continental U.S., including in some nurseries in Michigan. That led to a sweep of all possible sources of the box tree moth in the state.

"We're in a good place with the box tree moth. We searched at 47 sites across the state where it might have been introduced and we didn't find any of them," Lowenstein said. "That likely means eradication efforts were successful."

Eradication is the goal before an insect establishes itself. But once it has a foundation in the local ecology, controlling their numbers can become a lot tougher. The goal then turns to containment.

That can mean chemical sprays and quarantining nurseries with suspect plants, which can be bad for business.

MORE: California court rules a bumblebee is a fish under environmental law

The box tree moth has no natural predators in the U.S., which means vigilant monitoring from experts and homeowners is necessary to keep their numbers down. MSU Extension is partnering with the Michigan Department of Agriculture and Rural Development and the U.S.'s Animal and Plant Health Inspection Service for a second year of monitoring to double-check they didn't miss any sites.

But monitors like Lowenstein are also asking residents to keep a watchful eye over their own plants. That's why MSU Extension is offering free box tree moth monitoring traps, which can be mailed to homes.

The pheromone traps mimic the scents released by females can be very effective at attracting the males, which do not pose a threat the shrubs. Only the females can lay eggs. Order the traps here.