BRIGHTON, Mich. (FOX 2) - There is only a short time left before the last of the greatest generation leave us for good. A Brighton man is dedicating his life to make sure their stories live on forever.

When you hear the history from 95-year-old World War 2 Veteran Henry McMillan, you can't help but take pause. His journey began here at home at Ford where he helped prepare the country for war. And then he joined the Air Force. He lived, but the war came with a price.

The stories are framed on put on a wall. Each veteran then gets a model that Sean makes corresponding with the type of service each veteran was enrolled in.

"I got a letter from my brother who is shortly afterwards killed," he said.

Henry McMillan's story is on a wall at Independence Village in Brighton. It's heroism and valor that will never be forgotten. The man who has written well over 500 of these stories is Sean Tracy. He began as a caretaker at the facility but now his full time job.

His mission is to interview elderly veterans at 20 of these retirement homes across the Midwest.

"There's one resident here who actually witnessed 26 atomic bomb tests and one hydrogen bomb test. When he told me that I just about fell over," he said.

"We would get up every morning for the atomic bombs, put on high density goggles," he said. "I took Burgess out to the sea and they blasted off and said OK face away and turn around and go back to bed."

The stories are framed on put on a wall. Each veteran then gets a model that Sean makes corresponding with the type of service each veteran was enrolled in.

"He's building a model of an M 47 tank because he knew I was a tank mechanic in the Marine Corps and I'm just waiting to see that model of the tank when he gets it finished," said Jerry Beamer.

Sean is working on it. He does it for a simple reason. When men and women who have so much of their lives are ready for their golden years in facilities like this he wants them to know that even after they're gone, they will not be forgotten. 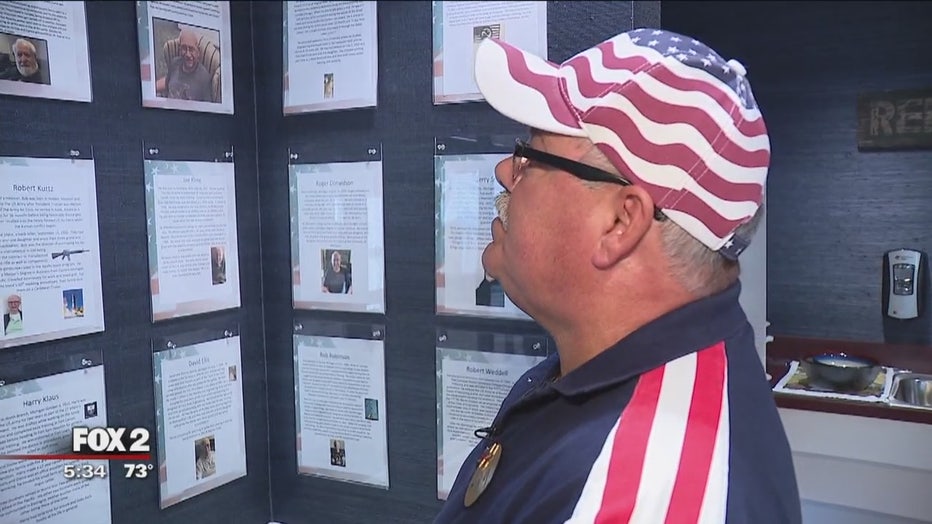 "They gave you and I the right to speak what we think, to feel what we feel, to praise whatever God we want to worship," Sean said. "They gave us the freedom that we have now."

Sean travels from Ohio to Indiana and all through Michigan-making sure no veteran in any of the 20 facilities goes through a day without realizing their service changed our lives and our country.

"There are a lot of veterans ahead of me that may be more deserving for a good interview but it was humbling," McMillan said.

"It's my thank you gift to them for what they did for us," Sean said.