The American food icon has been drowning in the aftermath of the 2017 tuna price-fixing scandal.

LOS ANGELES - An American food icon has declared bankruptcy and its assets appear headed to Asia.

“It’s been a challenging time for our company but today’s actions allow us to move forward with minimal disruption to our day-to-day operations,” said Jan Tharp, president and chief executive officer for Bumble Bee, in a statement.

While the company sells several products in addition to tuna -- from salmon to oysters -- it is its core product that has put bankruptcy's hooks in it. The company has been drowning in the aftermath of a price-fixing scandal -- along with competitors Starkist and Chicken of the Sea -- for the better of two years. In 2017, Bumble Bee paid $25 million in fines levied by the Department of Justice. 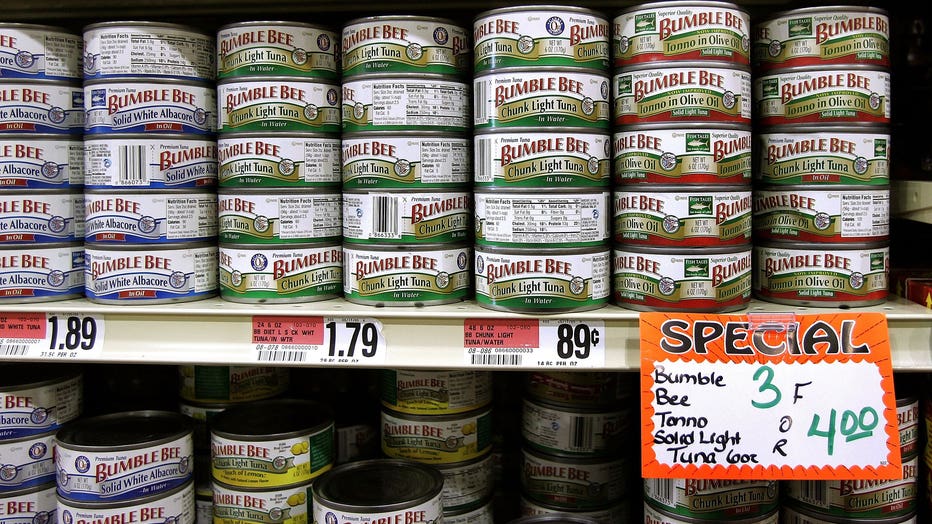 Cans of tuna fish are displayed in a grocery store in Des Plaines, Illinois. (Photo by Tim Boyle/Getty Images)

Tharp, in his statement, added that Bumble Bee's "clear intent that all U.S. and Canadian operations continue uninterrupted."

Bumble Bee and its competitors engineered the price-fixing scandal at the same time the industry started seeing a decline in sales. Fears of mercury poisoning and news reports of lovable dolphins ensnared in tuna nets contributed to Americans finding an alternative at lunch. "Americans have fallen out of love with canned tuna," Virginia Lee, a senior industry analyst at Euromonitor, told the Washington Post.

Still despite these travails, Americans have not turned their backs on tuna. According to the National Fisheries Institute:

One in four American consumers – 23 percent – serve tuna once or more a week.

Americans eat about 1 billion pounds of canned and pouched tuna a year. Only coffee and sugar exceed canned tuna in sales per foot of shelf space in the grocery store.

If FCF purchases the company, it will end its tenure as the last major American tuna company. Starkist is wholly owned by Dongwon Industries of South Korea and Chicken of the Sea is owned by Thailand-based Union Group.

Get updates to this story on FoxBusiness.com.