Can you guess which Super Bowl trivia is real or fake?

MIAMI - Even if you’re not a football know-it-all, there’s no reason why you can’t quiz your friends at your Super Bowl party this year.

Here is a list of true and false statements about the past 50+ years of Super Bowl history. Some of the trivia below is totally truthful! Other pieces, however, are a bit more falsified. The fun comes from trying to figure out which “facts” are which.

Try not to over do it on quizzing your friends, though. You’ll still want to be invited back to next year’s party.

True or False: The NFL has branded every Super Bowl with Roman numerals except one. 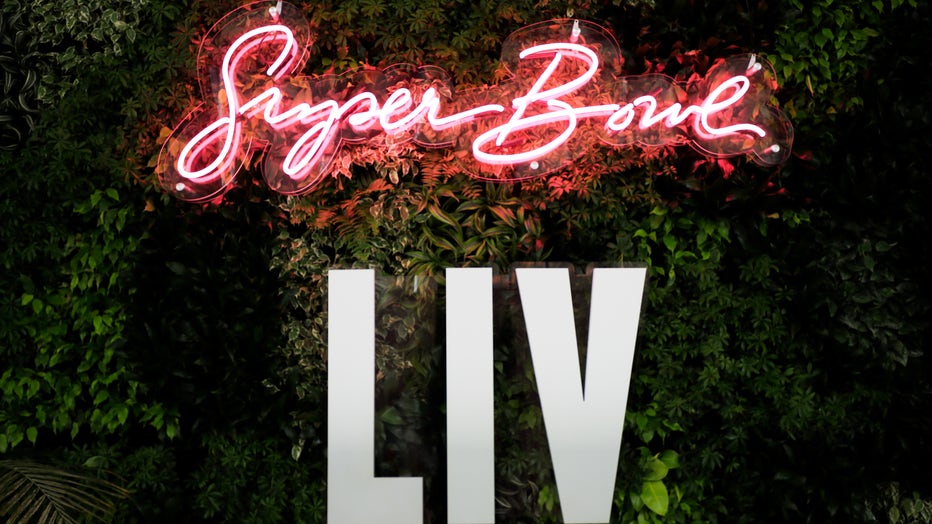 Super Bowl 50 is the only one to be branded with Arabic numerals. The Roman numeral for 50 is L, which NFL executives thought wouldn’t be as marketable. Honestly, imagine the memes about Super Bowl L.

The first four Super Bowls were actually known as the AFL-NFL World Championship Game. But after the merger in 1970, the league retroactively re-branded the games as Super Bowls and numbered them with Roman numerals.

True or False: For the last two decades, the AFC has only been represented by three quarterbacks in the Super Bowl.

Tom Brady, Peyton Manning and Ben Roethlisberger have owned the American Football Conference since the turn of the century. Besides this trio, no other quarterback has lead their team to AFC Championship victory. 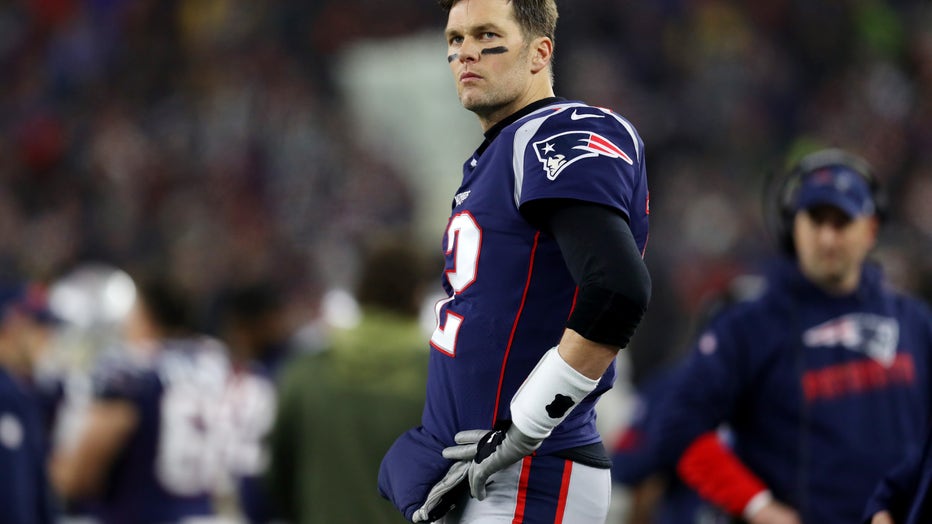 The late Steve McNair led the Tennessee Titans to the AFC title in 2000, as did Trent Dilfer and Joe Flacco with the Baltimore Ravens in 2001 and 2013. Rich Gannon took the conference crown with the then-Oakland Raiders in 2002. Patrick Mahomes is only the eighth quarterback to make this list this century.

For contrast, the National Football Conference Championship has been won by 16 quarterbacks since 2000.

True or False: The Madden video game franchise has correctly predicted the winners of every Super Bowl since 2004.

Some call it luck, but Electronic Arts calls it precision. Their Madden video game series has nailed every Super Bowl prediction since 2004. 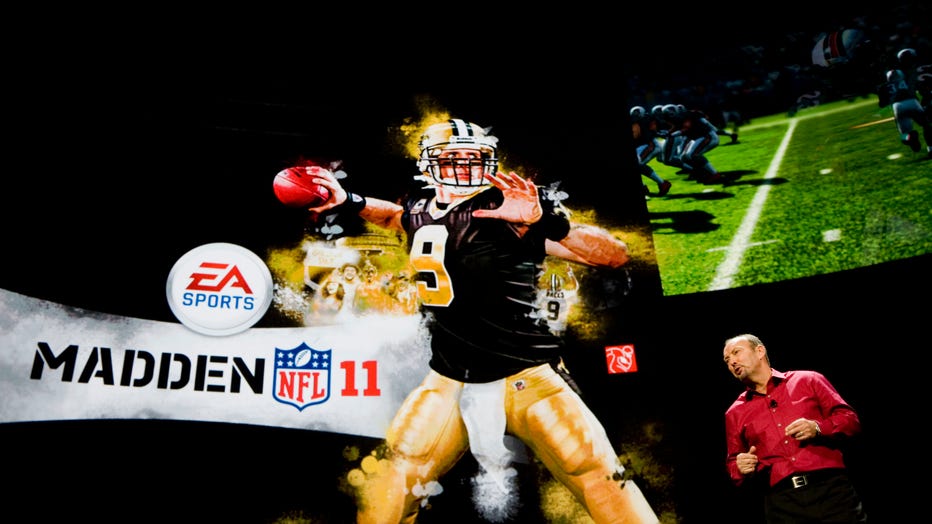 Madden is actually on a two-year losing streak. It hasn’t correctly predicted a winner since the Patriots beat the Falcons in 2017. Despite correctly predicting the winners between 2004 and 2007, the game’s all-time record is 10-6.

True or False: In 54 years, all but one NFL team has either played in or hosted a Super Bowl.

Only the Jacksonville Jaguars, Houston Texans, Detroit Lions and Cleveland Browns haven’t qualified for a Super Bowl. But all of them have hosted at least one. 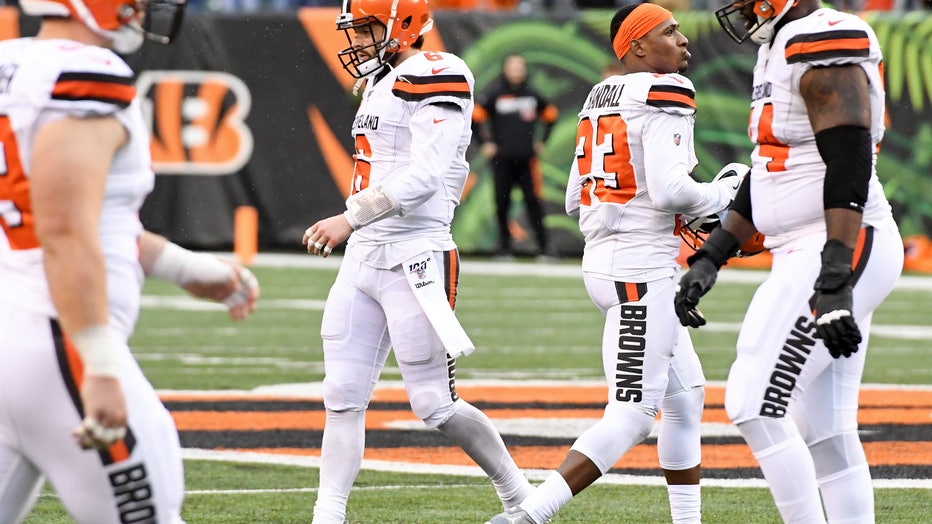 Who else but the Browns, right? The Browns are at a geographical disadvantage as a northern team with an open-air stadium. The NFL tends to select warm-weather cities to host its biggest game. Northern teams usually get a shot if they play in a dome. The only exception has been MetLife Stadium, home to New York’s Giants and Jets.

Having never played in a Super Bowl can be attributed to terrible luck in selecting quarterbacks and head coaches. It’s practically been a revolving door since the Browns’ revival in 1999.

True or False: Only New Orleans has hosted more Super Bowls than Miami.

As mentioned above, the NFL loves putting Super Bowls in warm weather locations and cities with a dome. New Orleans checks both of those boxes. The Big Easy has played host more times than Miami. 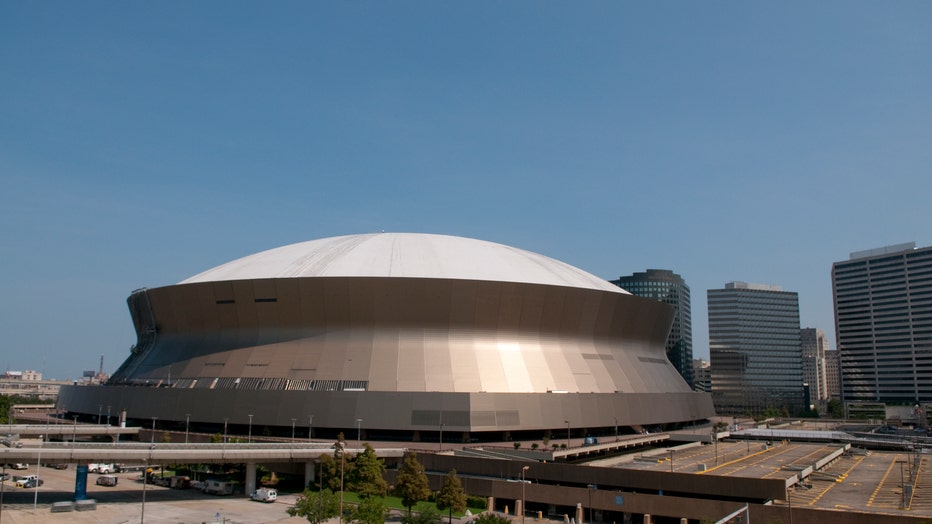 It’s a tie (for now). Miami and New Orleans have each hosted 10 Super Bowls. That’s more than any other city. When Super Bowl LIV kicks off, Miami will move into the top spot with its 11th. It will hold on to it until New Orleans hosts Super Bowl LVIII in 2024.

True or False: The NFC once won 13 straight Super Bowls.

The NFL prides itself on being built for parity, but two dynasties arose in the NFC to keep the AFC from claiming a title for more than a decade. 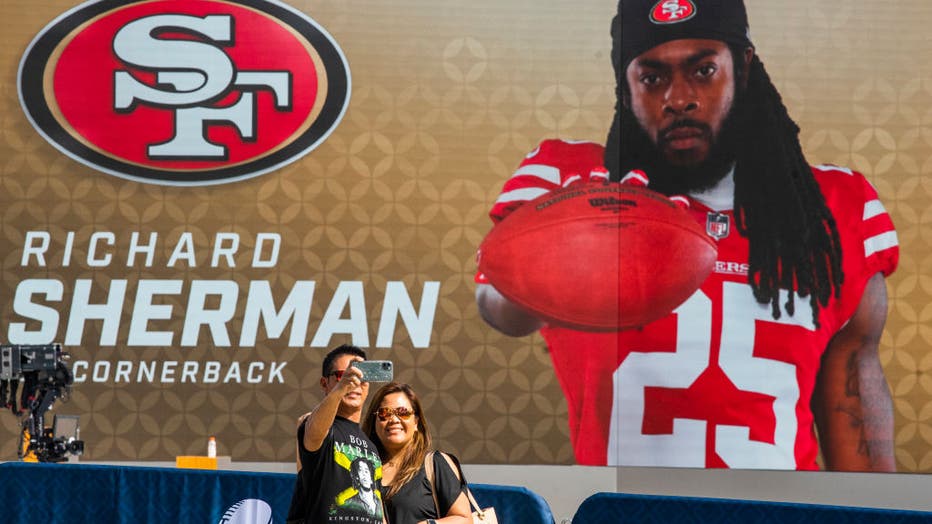 The NFC took home the Lombardi trophy each year from 1985 to 1997. The 49ers and Cowboys dominated that stretch. San Francisco won four of its five titles in that time span. Dallas won three of its five. The Buffalo Bills played a major role in this, considering the Cowboys knocked them off in back-to-back years.

The longest winning streak the AFC could ever muster was five in a row between 1973 and 1977.

True or False: No current 49ers or Chiefs players were alive when their respective team last won a Super Bowl.

Decades have gone by since the last time either team won a Super Bowl. None of their players are old enough to have lived through it. 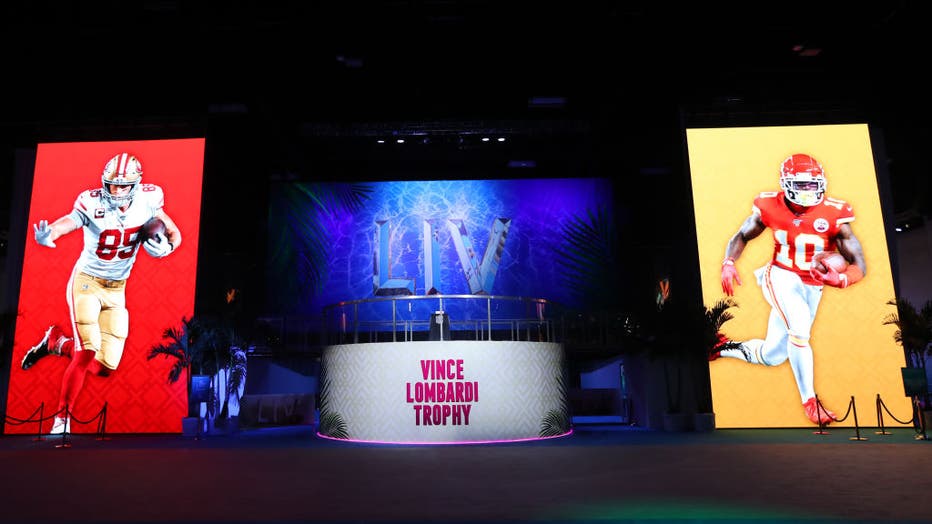 The verdict? FALSE, at least from the 49ers.

The Chiefs haven’t won a Super Bowl in 50 years, so this is certainly true for them. Terrell Suggs and Dustin Colquitt are their oldest players at 37.

True or False: Rob Gronkowski is the only player to win the Super Bowl the same season he’s featured on the cover of Madden.

Some view the Madden cover as a blessing. Others see it as a curse. But only Gronkowski has won the Super Bowl the same year he graced the cover. 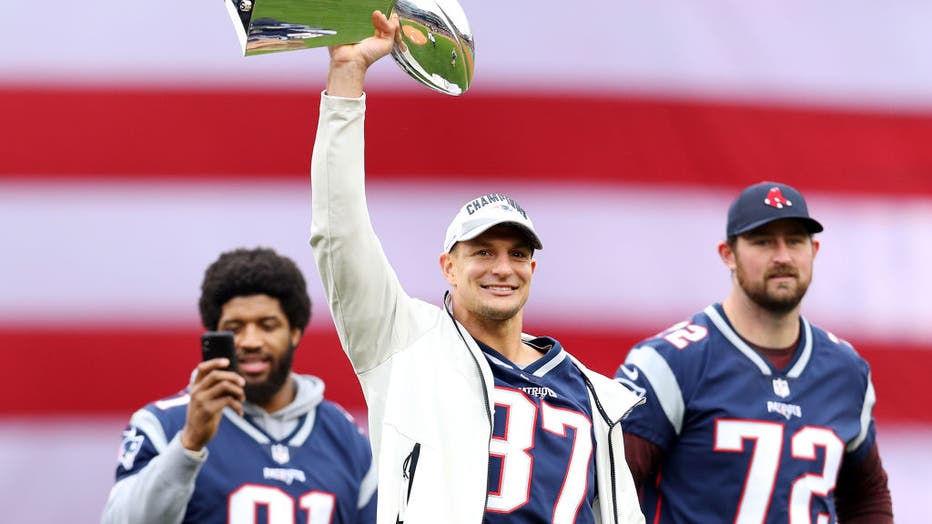 The list of players to make the Super Bowl the same year they’re cover athletes is short. Richard Sherman was the first, Gronk was the second. Tom Brady was the third. Patrick Mahomes is the fourth.

When the Patriots came from behind to beat the Atlanta Falcons 34-28 OT, Gronk became the first cover athlete to win the big one in the same season. Mahomes could become the second if the Chiefs beat the 49ers.

True or False: Andy Reid is the first NFL head coach to lead two different teams to the Super Bowl.

Andy Reid has been a head coach in the NFL since 1999 and is now leading his second team to the Super Bowl. No other active coach has found this kind of success. 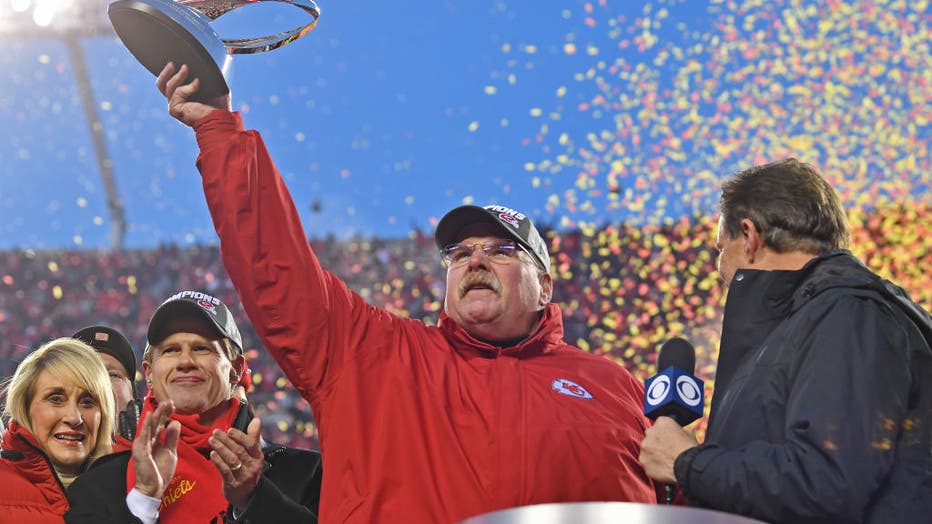 He’s the seventh. Don Shula, Bill Parcells and Dan Reeves pulled it off before Reid got his first head coaching gig with the Philadelphia Eagles.

Dick Vermeil, Mike Holmgren and John Fox did it during Reid’s time.

True or False: The Kansas City Chiefs were the first team to lose a Super Bowl. 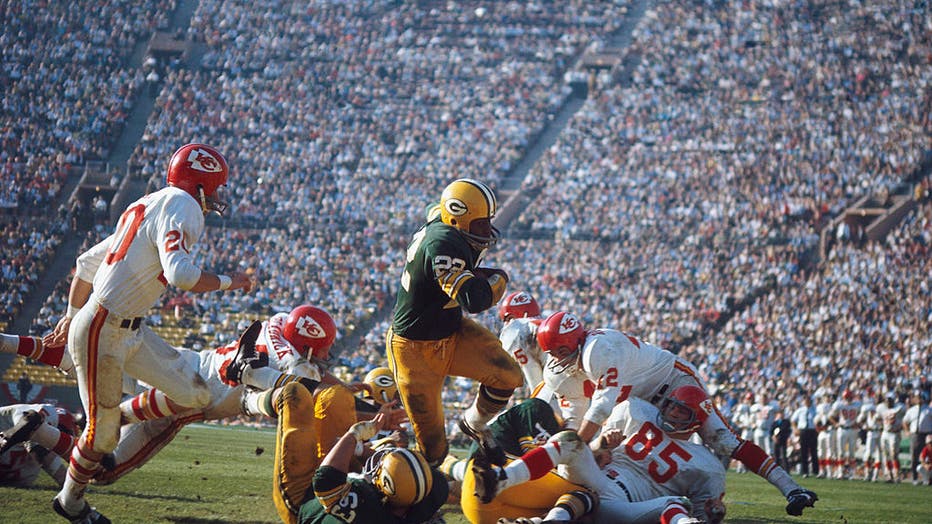 (Photo by Focus on Sport via Getty Images)

As the 1967 American Football League Champions, the Chiefs had no problem beating the NFL’s champion.

The Green Bay Packers knocked off the Chiefs 35-10 in 1967. This year’s NFC Championship game nearly gave us a Super Bowl I rematch. But the 49ers had other plans. They beat the Packers 37-20.

What truths will be revealed at this year's big game? Watch Super Bowl LIV on Sunday, Feb. 2 on Fox.

This station is owned by the Fox Corporation.