It’s called the Banana Derby which is going on all week, multiple shows a day at a fair in Hamburg Township in Livingston County.

LIVINGSTON COUNTY, Mich. (FOX 2) - Capuchin monkeys in costumes riding on dogs may seem cute, but not to some. The Humane Society of the United States is sounding the alarm about what they’re calling animal abuse.

"It's so outdated, it is so cruel and we are better than this," said Molly Tamulevich, the Michigan state director for the Humane Society of the United States. "We are in the middle of a heat advisory and you’re putting a full costume on a wild animal, and forcing them into a vigorous activity."

It’s called the "Banana Derby" which is going on all week, multiple shows a day, at a fair in Hamburg Township in Livingston County.

"Are they in cages that are big enough? Are they getting a species-appropriate diet?" said Tamulevich. "What about enrichment and exercise? These are very intelligent and social animals."

A video clip was taken Wednesday by protesting animal welfare groups. The voice you hear is Phil Hendricks who created Banana Derby 15 years ago.

"Bert and Gilligan are on tour with us right now," Hendricks said.

FOX 2 talked briefly with Hendricks – before his phone died. He side-stepped questions about animal welfare – and his history of animal welfare violations. Instead, he promoted his shows.

"The only place in Michigan you can see monkeys riding dogs right here at the Hamburg Family Fun Fest, they should bring the whole family" he said. "It’s a great time."

He says the monkeys are kept in an air-conditioned trailer and are part of his family. He added that animals being taken care of and having rights are two different things.

"What we don’t see is behind the scenes, it is a life of confinement," Tamulevich said.

She says mental stress – and physical stress happen often with wildlife shows, and the animals' teeth are pulled so they don’t bite.

Sources tell FOX 2 – one of the monkeys used in this Livingston County show, didn’t have any teeth.

"If we don’t pass laws that prohibit this kind of thing, we are going to see them pop up from time to time," said Tamulevich.

FOX 2 spoke to the Hamburg Township officials – they called in Livingston County Animal Control for an inspection and they found no issues with the monkeys' welfare. 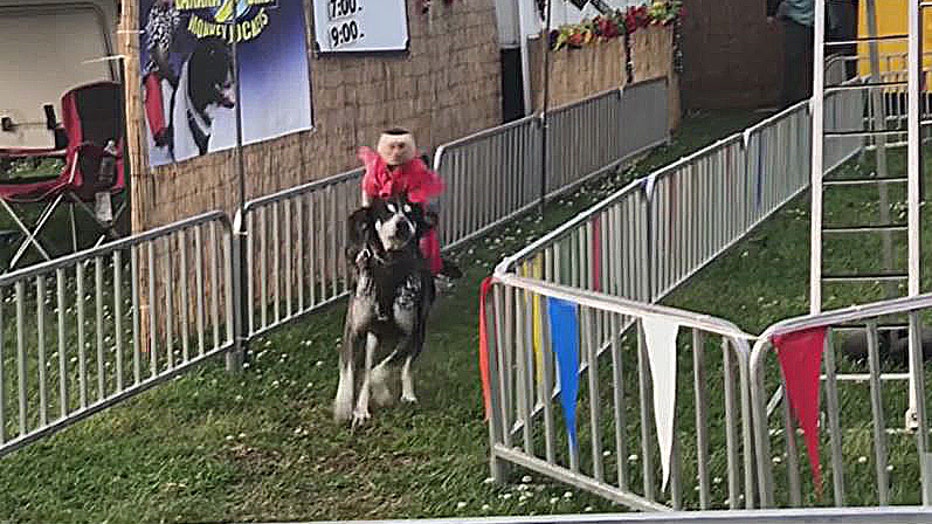