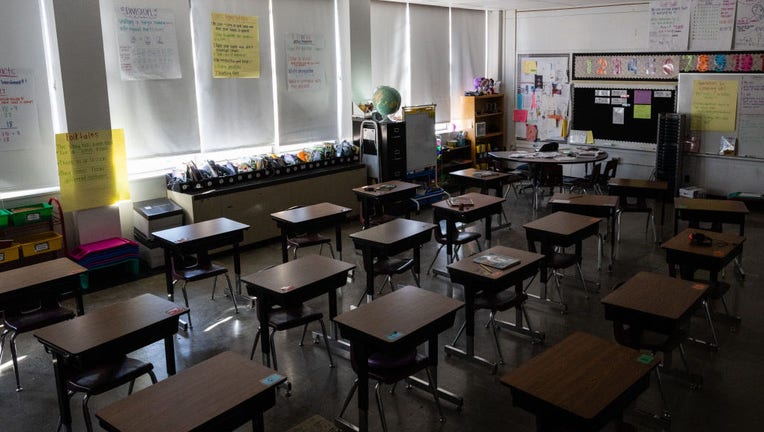 FILE - Desks are seen in an empty elementary school classroom on Jan. 11, 2022, in Louisville, Kentucky. (Photo by Jon Cherry/Getty Images)

A school district in Missouri is reportedly reinstating corporal punishment under a new policy, which will be used as a last resort and with permission from parents after many expressed a desire for an alternative to suspension.

The Cassville School District in southwest Missouri said the new policy allows students to be punished with a paddle if "other means of discipline have failed and only in reasonable form."

The school superintendent of the 1,900-student district told local news outlets that Cassville is a "very traditional community" and that parents have long expressed frustration that paddling wasn’t allowed in the district. The disciplinary measure was abandoned in 2001, according to the Springfield News-Leader.

"Parents have said 'why can't you paddle my student?' and we're like 'We can't paddle your student, our policy does not support that,'" Cassville school superintendent Merlyn Johnson told Springfield News-Leader. "There had been conversation with parents and there had been requests from parents for us to look into it."

Parents in the district were recently notified that the school board approved a policy in June to once again allow spanking in school, according to the newspaper. Each family is being asked to opt-in or out.

The Cassville School District did not immediately respond to a request for comment.

When asked Tuesday how many parents opted to allow their children to be paddled, Johnson said he didn’t yet know. But the superintendent said local families in Cassville were largely supportive of the move.

"We've had people actually thank us for it," Johnson told the Springfield News-Leader. "Surprisingly, those on social media would probably be appalled to hear us say these things but the majority of people that I've run into have been supportive."

Where is school corporal punishment legal in the US?

Corporal punishment, generally defined as paddling, spanking, or other forms of physical punishment, is still legal at public schools in at least 18 U.S. states, according to the National Youth Rights Association.

In North Carolina, a state statute allows corporal punishment, but each county banned the practice individually, according to the youth rights nonprofit.

It’s also still allowed in private schools in every U.S. state except Iowa and New Jersey, the youth rights nonprofit says on its website.

The practice in schools remains legal because of a 1977 Supreme Court decision, called Ingraham v. Wright, in which the high court ruled that corporal punishment in public schools was constitutional, leaving states to decide whether to allow it.

A 2016 study estimates that over 160,000 children — ranging from preschoolers to 12th grade — in states where it’s legal are subject to school corporal punishment each year. Other reports suggest the number may be slightly lower, with the Education Department’s Office for Civil Rights reporting that over 106,000 children were physically punished at public schools during the 2013-14 school year.

"Corporal punishment signals to the child that a way to settle interpersonal conflicts is to use physical force and inflict pain. Such children may in turn resort to such behavior themselves," the AACAP states on its website. "They may also fail to develop trusting, secure relationships with adults and fail to evolve the necessary skills to settle disputes or wield authority in less violent ways."

It adds: "Supervising adults who will-fully humiliate children and punish by force and pain are often causing more harm than they prevent." 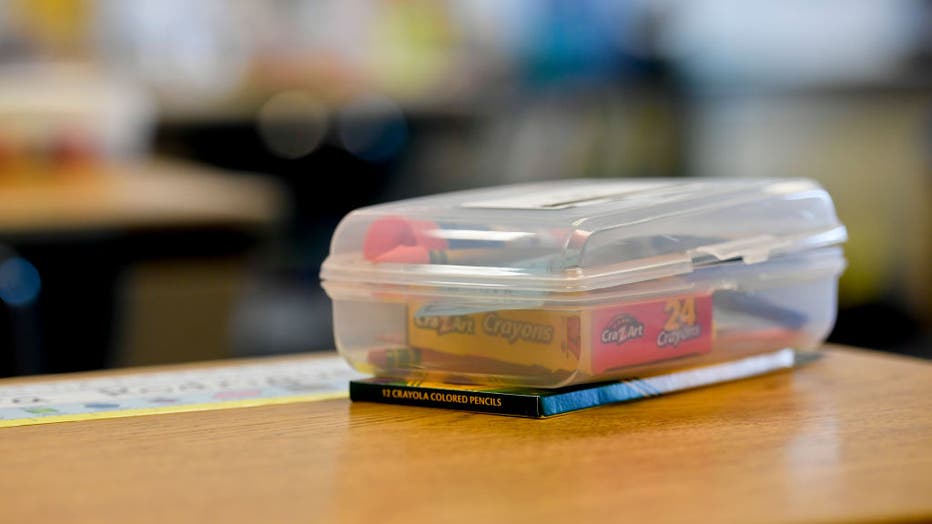 FILE - A crayon box on a desk in a second-grade classroom in a file image dated Aug. 21, 2020. (Photo by Ben Hasty/MediaNews Group/Reading Eagle via Getty Images)

School corporal punishment has been found to occur more frequently among students who are male, poor, and minorities. Nationwide data reported by public schools to the Office of Civil Rights shows that Black children were twice as likely as White children to be subject to such punishment.

The report, published in 2016 by the Brookings Institute, says that seven states accounted for 80% of school corporal punishment in the U.S.: Mississippi, Texas, Alabama, Arkansas, Georgia, Tennessee, and Oklahoma.

The AACAP says other methods of discipline are more effective in "promoting self-control and eliminating undesirable behaviors."

"The AACAP recommends non-violent methods of addressing inappropriate behavior in schools, such as behavior management and school-wide positive behavior supports," it says.