WASHINGTON - Transportation Secretary Pete Buttigieg hinted on Monday that the Centers for Disease Control and Prevention was considering whether to impose requiring negative COVID-19 tests for domestic airline flights, similar to what is now required for international flights.

Speaking during an interview with Axios’ Mike Allen in an episode that aired Sunday, Buttigieg said "There's an active conversation with the CDC right now."

"What I can tell you is, it's going to be guided by data, by science, by medicine, and by the input of the people who are actually going to have to carry this out," he added.

Asked about Buttigieg's remarks, CDC chief Dr. Rochelle Walensky said Monday the agency was reviewing the proposal as a possible added safety measure to stem the spread of the virus.

"The more screening we’re doing in places where people are gathering, I think the more asymptomatic disease we will detect ... there’s more gathering that happens in airports and to the extent that we have available tests, to be able to do testing," she said. "First and foremost I would really encourage people to not travel but if we are traveling, this would be yet another mitigation manner to try to decrease the spread."

Later on Monday, Buttigieg said that he believed the CDC's decision will be guided by common sense, medicine and science. He acknowledged that travel industry groups — they by and large oppose the plan as unduly dampening air travel — had raised "valid points" that limited testing resources could be directed away from vulnerable communities as a result, and that the virus could be almost as easily spread by people who travel by car. 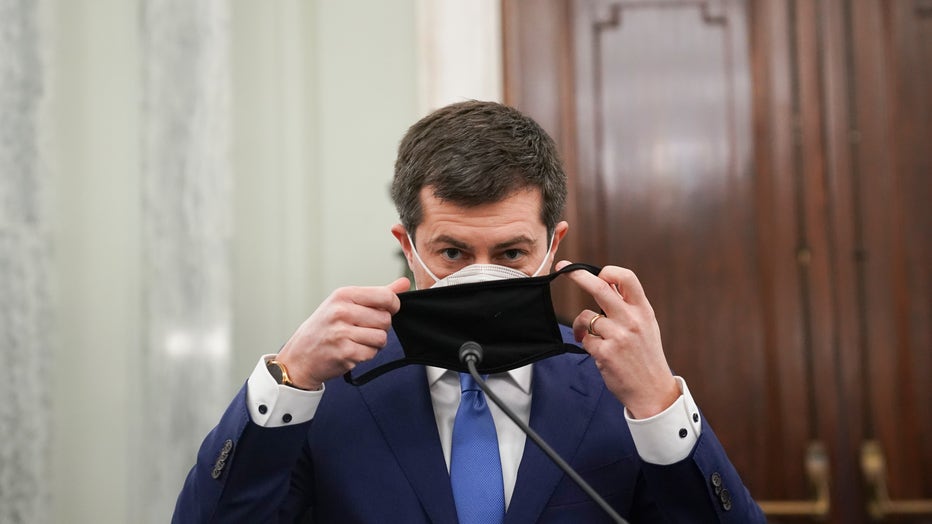 FILE - Pete Buttigieg, nominee for US Transportation Secretary, puts on his mask at his confirmation hearing before the Senate Commerce, Science, and Transportation committee in Washington, DC, on Jan. 21, 2021 (STEFANI REYNOLDS/POOL/AFP via Getty Images)

"We know it’s the appropriate measure for international travel, people traveling into the U.S.," partly because of the threat of mutated virus variants from other countries, Buttigieg told CNN. "I would say the domestic picture is very different, but the CDC is always evaluating what can best be done to keep Americans safe."

Delta Air Lines CEO Ed Bastian told the Associated Press Monday that he thinks testing international travelers, as the U.S. is now requiring, is a good thing, but he's opposed to making a COVID-19 test a requirement for flying within the U.S. He says that will lead to an even steeper drop in travel, which is only back to about 40% of where it was before the pandemic.Bastain said travel demand will be weak for the next couple months, but he's holding onto hope for a summer "surge." That's based on more people getting vaccinated against COVID-19 and feeling it's safe to travel.

Meanwhile, Buttigieg is currently in quarantine after a member of his security detail tested positive Monday for COVID-19.

The agent had been "in close contact" with Buttigieg, including Monday morning prior to the agent’s positive result, the Transportation Department said in a statement. Buttigieg has since tested negative and has had no symptoms.

"Secretary Buttigieg will take all necessary steps to ensure there is no spread, including quarantining for a period of 14 days, and will continue to follow all other CDC guidelines," said Laura Schiller, the department’s chief of staff, referring to the Centers for Disease Control and Prevention. "He received the first dose of the vaccination in recent weeks, and will receive the second dose when his quarantine is completed."

Buttigieg said late Monday he was feeling fine with no symptoms and that the agent had no signs of COVID-19 other than testing positive for the virus.

The Asssociated Press contributed to this story.