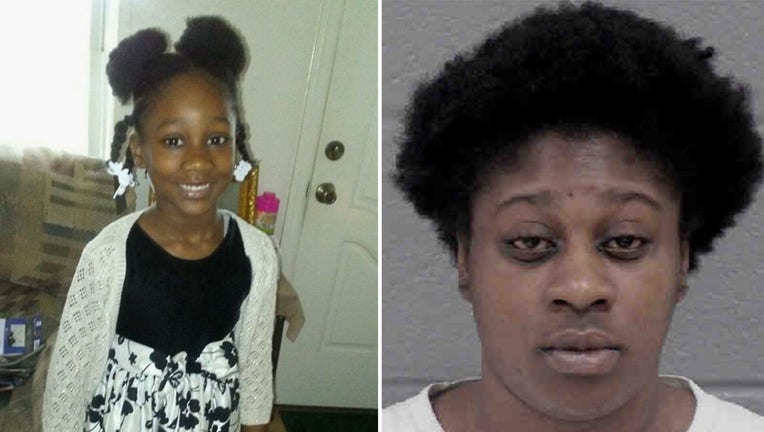 CHARLOTTE, N.C. - A Charlotte woman has been charged with beating her 7-year-old daughter to death. Authorities say the crime happened in Florida, but she was taken into custody in North Carolina.

Janee Dickson, 26, was arrested on a charge of aggravated manslaughter of a child in Charlotte Friday. She is being held at the Mecklenburg County as she awaits extradition to Volusia County, FL where the crime occurred.

Volusia County detectives began investigating in March 2018 when 7-year-old Kamia Jean-Baptiste was brought to an area hospital with visible trauma. She had to be airlifted to another facility for advanced treatment and indicated that her injuries were the result of abuse.

Kamia died a day after she was taken to the hospital, on March 7. An autopsy determined she died from hemorrhaging of soft tissue, which was likely a result of serious physical abuse. The cause of death listed in the autopsy report was blunt force trauma, and the manner of death was ruled homicide.

During interviews with detectives, Dickson first said Kamia got hurt on a slide at the playground. However, Dickson’s boyfriend, Brandon Williams, was also interviewed and told detectives that Dickson beat Kamia on several occasions.

As the investigation continued, Dickson changed her story, telling detectives that Kamia had been hit, but in a 'parenting' capacity, and that Williams was the one who hit her.

She said on March 5, while the three of them were in the car, Kamia kept asking to stop and use the bathroom. Dickson said Williams drove to a side street, pulled Kamia out of the car and beat her for 15 to 20 minutes with a blunt object. She then said he drove to another location and beat her again for 30 minutes with the same object and a second object.

Detectives were able to use GPS to confirm the two locations Dickinson said they stopped at on March 5 and up their eventual arrival at the hospital at 8:44 a.m. on March 6.

Dickson admitted to detectives that did not call 911 or seek help for Kamia during or after the beatings even though she noticed the child was having trouble breathing all night. She said in the morning, she noticed that Kamia’s body had gone limp, she was cold to the touch, her head tilted, and her eyes were open but glossed over and unresponsive. That’s when she decided to take Kamia to the hospital. When asked if she thought Kamia had died before she took her to the hospital, Dickson replied, “Basically, yeah.”

She went on to say that Williams got rid of the two items he used to beat Kamia on March 7, along with Kamia’s clothes and personal items. Williams denied all of Dickson’s allegations, saying he never hit Kamia.

Detectives say the investigation into the case will continue and additional charges are possible.