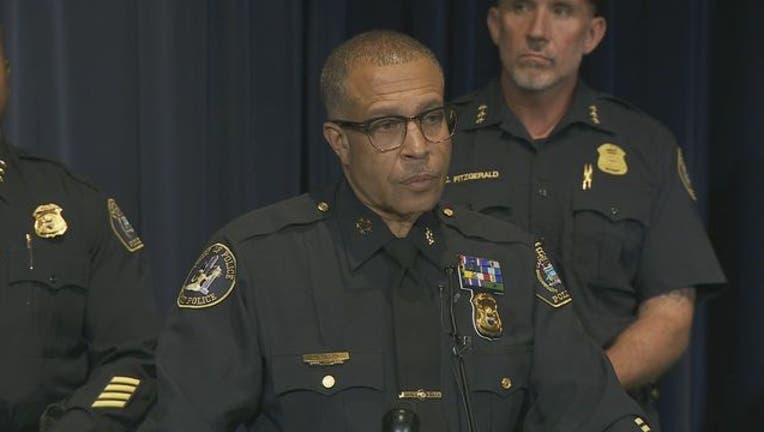 DETROIT (FOX 2) - A liquor bottle on the lawn. No fried mushrooms. These are things that have led to gunfire this past week in Detroit - and Chief James Craig says they've seen enough. He announced a new social media campaign for the summer: Check yourself, stop the violence.

He said that although certain crime stats are down today com pared to last year's - 12 fewer homicides and 17 fewer non-fatal shootings - they can't be happy about it because of the recent violence over "senseless things." In fact, he says 31 percent of their homicides so far this year have been caused by a simple argument.

"This is the first day of summer and I thought it would be fitting to have this conversation. We're not celebrating that we have a reduced number of non-fatal shootings, but we're saying the shootings that we are seeing, a vast majority is because of disputes."

On Wednesday a man was critically hurt in a shooting at Nicky D's Coney on 7 Mile and Greenfield. A group left after they were told the restaurant didn't have fried mushrooms, and then came back with a gun. A man waiting for his food was shot in the jaw.

Since then, a pair of 61-year-old twins have been arrested.

Then on Thursday night, a father shot and killed a young man who appeared to have first shot his 15-year-old son during a robbery. The two boys had apparently met up to sell and buy a video game.

Also, on Monday night, a 45-year-old woman was shot dead in her house after a dispute with neighbors. Craig said Friday it was because she moved a littered liquor bottle off her lawn back onto theirs after their house party.

The senseless, spontaneous violence appears to be happening more frequently, though Craig said it's happening all over the country. He also referred to other times in the past it's happened here in Detroit, like when the 3-year-old boy was shot dead in the backseat of his godmother's car after road rage; or last summer when an employee at a barber shop shot and killed his coworker after an argument.

"The issue is the disrespect," Craig says. "[People] just couldn't handle what they believed to be disrespect."

He says we'll be seeing posts and photos and videos from the department on all platforms of social media throughout the summer to get the message out: check yourself, stop the violence.

"Many times we can predict; we can prevent; we can educate and stop violence. For example, if there is a gang dispute and we know there's going to be retaliation, we can address that. And we'll make a great effort to address that. But if you're talking about an argument where someone cuts someone off on the freeway, how do you predict that? So this is more of an educational campaign to say basically, stop the violence. To stop the violence you much first check yourself; your friend should check you, too."