In the middle of Crooks Road near Big Beaver in Troy, two drivers - one in their 60s, the other in his 50s, start fighting.

The driver of the Chevrolet Colorado pickup truck did get back in his vehicle and drove off - but first went over the victim's foot.

"I've never seen a man with more anger and rage in his face and his eyes," said Attorney Mark Rossman. "His face was red it looked like every blood vessel had popped. He was frothing at the mouth."

Rossman was heading into the office Tuesday morning when his commute came to an abrupt halt.

"Two cars ahead of me there is altercation that is clearly developing," he said.

Rossman says right before the video starts, a single punch is thrown to the head.

"He dropped like a bag of rocks into the street," Rossman said.

That was when Rossman got out and got involved.

"I would have a hard time living with myself if I didn't get out and try and stop this," he said. "I told the man to get back in his car. I had to tell him twice and I wasn't going to tell him a third time."

The driver of the Chevrolet Colorado pickup truck did get back in his vehicle and drove off - but first went over the victim's foot.

"Unfortunately he made the bad decision to speed off and drive over the man's foot which I heard crunch," Rossman said.

Somehow Rossman says the man is able to get himself to the sidewalk.

"He was very conscious, that's when he told me he was on his way to chemotherapy," Rossman said.

As for the other driver, "He chose the act of a coward and he drove off," Rossman said.

FOX 2 tried to find the registered owner of the truck but were told he was not home.

Police are asking any witnesses of the road rage incident to give them a call.

In addition to the alleged assault, state records indicate the driver of the truck let his license expire five days ago. Still no arrests have been made. 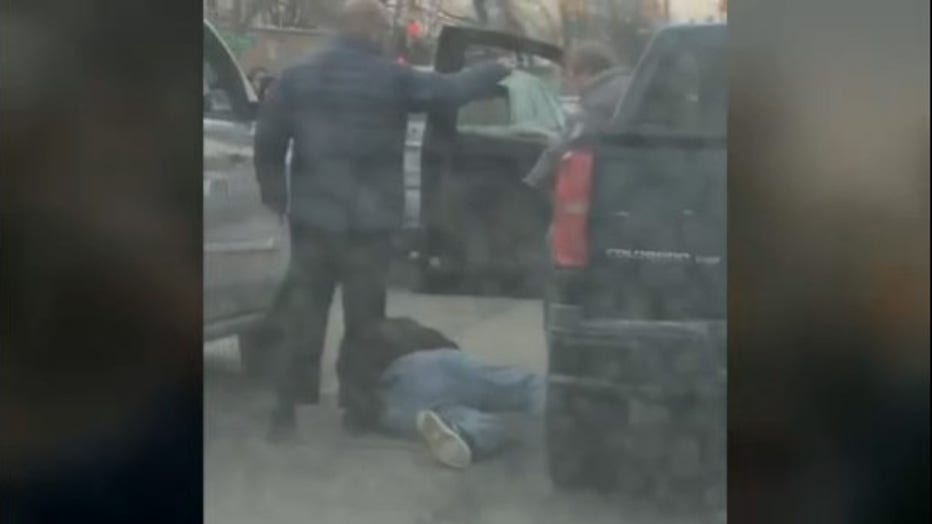