The FAA confirmed a pilot spotted a jetpack flier near LAX

LOS ANGELES - Federal officials are investigating another reported sighting of a jetpack man flying near the Los Angeles International Airport.

According to the Federal Aviation Administration, a Boeing 747 pilot spotted a so-called "jetpack man" at an estimated altitude of 5,000 feet approximately 15 miles east of LAX on Wednesday around 8 p.m.

It's a mystery in the sky. A pilot spotted a so-called "jetpack man" at an estimated altitude of 5,000 feet approximately 15 miles east of LAX on Wednesday around 8 p.m.

In audio recordings obtained by FOX 11, the pilot could be heard alerting air traffic control about the sighting:

ATC TOWER: "Was he off your left or right sir?"

ATC TOWER: "Do you know what altitude?"

PILOT: "We were looking but we did not see Iron Man."

Other jetpack sightings near LAX

There have been multiple jetpack sightings dating back to early 2020 leading to investigations by the FAA and FBI.

In December, a Southern California pilot captured video of what appeared to be a person with a jetpack in the skies above the Rancho Palos Verdes coast at an altitude of 3,000 feet. 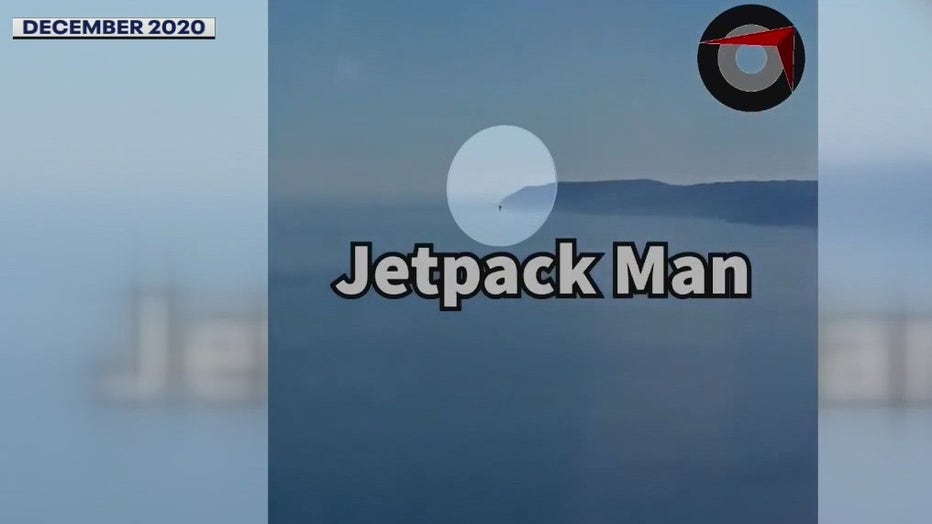 Other sightings were also reported on August 31 and October 14 of 2020.

Who is the LA jetpack man?

Authorities have not said that any of the sightings are related, and investigators believe the December sighting may have been a drone made to look like a man in a jetpack. However, a number of similar reports prompted the FBI to get involved. The agency even issued a report saying the sightings were unlikely to involve an actual person with a person.

Based on research, jetpacks can fly that high but it’s pretty uncommon. There's an assumption that people with the technical and financial ability to fly at this extreme height and near an airport would also understand the regulations around flying in LAX's flight path.

"I think it’s some sort of scientist working on a jetpack and popping up in different areas," said Marcus Hollis who spends his mornings watching planes fly in and out of LAX.

"A Boeing 747 pilot reported seeing an object that might have resembled a jetpack 15 miles east of LAX at 5,000 feet in altitude. Out of an abundance of caution, air traffic controllers alerted other pilots in the vicinity."

The agency says it is currently investigating the latest sighting in restricted airspace near LAX.