WASHTENAW COUNTY, Mich. (FOX 2) - A disturbing video has surfaced showing the use of force on a woman by a Washtenaw County Sheriff's Deputy Tuesday morning.

The woman punched in that video along with her husband are being held at Washtenaw County Jail.

Washtenaw County Sheriff use of force on woman caught on camera

A disturbing video of an arrest by a white deputy of a black woman he used force on has surfaced.

The sheriff says they are investigating what happened and addressed a group of protesters livid about what happened.

FOX 2 spoke with the woman's daughter.

"He punched my mother three times like she was a whole guy," said Jaquisy Diggins.

A white sheriff deputy who can be seen repeatedly punching a black woman on camera, is on administrative leave. The Washtenaw County Sheriff's Office is reviewing his use of force as the video went viral online and has sparked outrage.

"The officer who hit my mother should be fired completely. not on the force none of that," Diggins said.

Diggins says deputies arrested both her mother and father early Tuesday morning.  The sheriff's office says they and other police agencies were in the 2000 block of Peachcrest in Ypsilanti responding to a shooting in which a 34-year-old woman was struck.

Diggins says there was a party in the street that night. An altercation broke out and shots were fired soon after.

As deputies sought a potential suspect at Diggins' home on Peachcrest, the sheriff's office claims her parents refused to leave the area when deputies set up a perimeter around the house.

There was a dispute and then the apparent punches on camera. 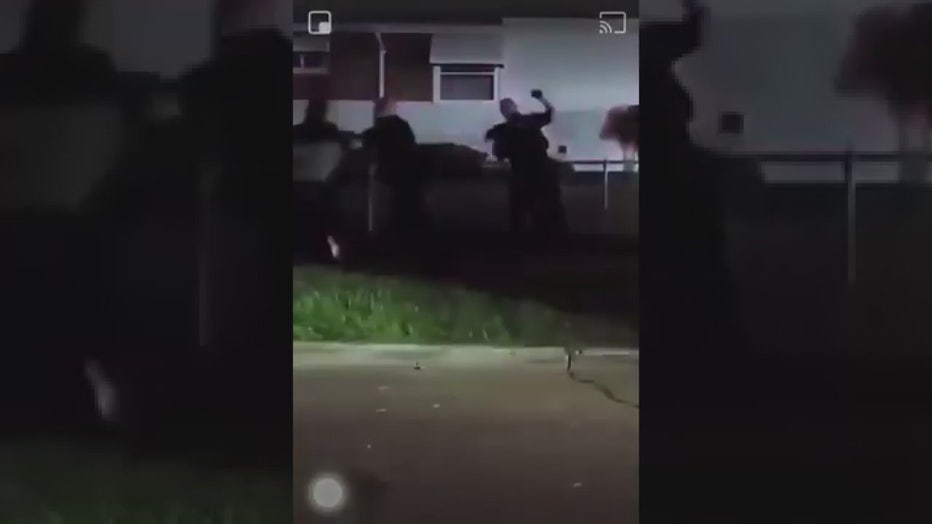 "They asked her to back up and she did back up as you can see in the video she backed up with her hands like this and the officer still rushed my mom," Diggins said.

Their daughter claims deputies did not like that her mother was recording them. Her father was tasered.

"He was doing what any man, husband would do, and he was defending his wife when the (sheriff deputy) punched her," she said. "And then after the fact he did calm down and tried to talk with the police officers and another officer came up and tased him, when he was being calm."
"If I just see that image, look at that image like I did last night and several times today, it's unsettling, it's disturbing. But here's the other part: I can't make an official decision until I get all the facts," said Washtenaw County Sheriff Jerry Clayton.

Washtenaw County Sheriff Jerry Clayton spoke with community leader Nate Frazier about the arrest and where things go from here.

The sheriff's office says after it collects all the information of what happened, it plans to hand the details to an outside agency for an investigation.
outside agency investigation. In the meantime, the woman in that video and her husband will be arraigned on obstruction of justice and possibly two more charges.

At the same time, there is planned another protest outside the sheriff's office Wednesday.

The Public Information Officer for the sheriff's office said he was not aware of any previous cases of the deputy and use of force.

The woman in that video has twice had altercations with law enforcement. She has sued Taylor police for harassment and police in Canton for a 2019 arrest in which she was roughed up.

She and her husband believe they are Moorish Nationalists or Sovereign Citizens and that they are subject to their own laws.