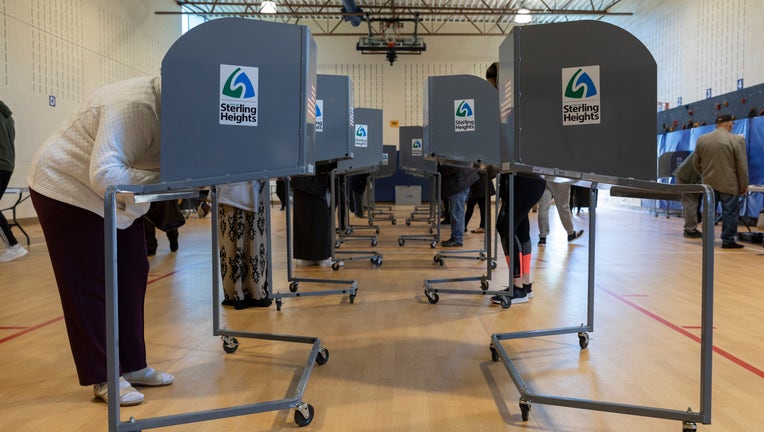 STERLING HEIGHTS, MI - NOVEMBER 03: People cast their vote on Election Day at Jefferson Elementary School on November 3, 2020 in Sterling Heights, Michigan. After a record-breaking early voting turnout, Americans head to the polls on the last day to

LANSING, Mich. - Conservative activists who falsely claim former President Donald Trump won reelection asked the Republican-led Michigan Senate on Thursday to order an audit of the results, seeking a review like one that is underway in fellow battleground state Arizona.

Michigan Conservative Coalition co-founder Marian Sheridan said "something very wrong" happened in the 2020 election, though Trump's unfounded fraud allegations have been resoundingly rejected by officials who certified the results, judges and others. The group said it will submit more than 7,000 affidavits from people backing a "forensic" audit.

It was not clear what, if anything, Senate Republicans may do.

Senate Majority Leader Mike Shirkey, a Republican who has acknowledged Joe Biden won Michigan, said Wednesday that the expected delivery of petitions was an "indication of the continued concern about ... the integrity of the election." He said once the Senate Oversight Committee's pending report on the election becomes public, however, "many of those concerns will be put to bed. But people are passionate about it. So we've got to let them have their opportunity to voice their concern."

GOP senators this week approved tighter photo ID requirements for elections, which Democrats denounced as a bid to suppress votes by making it harder to request absentee ballots and to vote in person without identification. Biden defeated Trump by more than 154,000 votes, or about 2.8 percentage points, in Michigan.

A 2018 voter-approved constitutional amendment that expanded voting options gave voters the right to have statewide election results audited, in such as manner as prescribed by law. Legislators delegated audit procedures to the secretary of state.

Secretary of State Jocelyn Benson, a Democrat, has said 250 post-election audits were conducted around the state and are "concrete evidence that November's election was fair, secure and accurate, and that the results reflect the will of Michigan voters."

The effort in Arizona will not change Biden's victory, and election experts have pointed to major flaws in the process. But it has become a model for Republicans in other states hoping to turn up evidence supporting conspiracy theories.