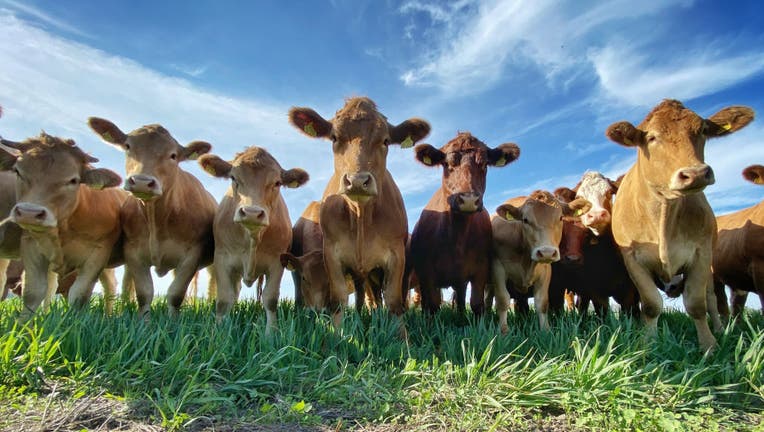 FILE - Cows stand on a pasture in bright sunshine.

Therapy animals are not a new concept, but in a world where mental health is being tested by an ongoing pandemic, people are searching for comfort it what might seem like unusual places.

A practice that originated in the rural town of Reuver in the Netherlands, “koe knuffelen,” which means “cow hugging” in Dutch, is gaining global popularity, according to a BBC report.

It’s not just the act of hugging a cow that helps relieve stress and lower anxiety, but making contact with any furry critter could help improve one’s mental health.

Cows are the optimal cuddling buddy, and it’s not just because they’re adorable.

A 2007 study in the journal Applied Animal Behaviour Science states that cows “show cues of deep relaxation, stretching out and allowing their ears to fall back when massaged in particular areas of their neck and upper back.”

“Cow cuddling is believed to promote positivity and reduce stress by boosting oxytocin in humans, the hormone released in social bonding. The calming effects of curling up with a pet or emotional support animal, it seems, are accentuated when cuddling with larger mammals,” according to the BBC.

The need for companionship during a socially-distanced time is steadily increasing.

RELATED: Bovine baffles beachgoers after it seemingly emerges from sea

At the onset of the pandemic, people started to hunker down at home and the number of animals in foster care increased significantly.

24HourPetWatch, a pet microchip company that collects data from roughly 1,500 U.S. shelters and rescue centers, said the number of animals in foster care has increased since mid-March, but data points to a decrease in pet adoptions during COVID-19.

According to Matt Bershadker, president and CEO of the American Society for the Prevention of Cruelty to Animals (ASPCA), since March 15, applications to foster pets are up 400 percent compared to the previous year.

“While the ASPCA’s adoption and foster rates vary based on factors including the population of animals in our care and feline breeding season, there has been an incredible response from people looking to temporarily foster animals during this difficult time," Bershadker said.

As the the world continues to struggle with the COVID-19 pandemic, social distancing and lockdown restrictions have taken their toll on people.

New cases are surging in hotspots throughout the U.S., and more and more people are getting lockdown fatigue as some local governments are putting restrictions on residents once again.

New York Governor Andrew Cuomo announced restrictions on Oct. 6 that were aimed at “COVID-19 hotspots” in Brooklyn, Queens, and Broome, Orange, and Rockland counties. They will remain in effect for 14 days and involve limiting access to houses of worship in the affected areas.

The plan marks a sizeable step back after a cautious reopening this spring and summer in New York, an early U.S. hot spot of the pandemic and the deadliest. While the daily toll dropped dramatically after a surge in March and early April, more than 33,000 New Yorkers in all have died of COVID-19, more than in any other state, according to figures collected by Johns Hopkins University.

FOX News and FOX 5 NY contributed to this report.