Even though his customers aren't happy, Joe Vella doesn't have a care in the world. We caught up to him outside the Livingston County Courthouse where he's a defendant in a criminal case and has been ordered to pay back more than $1 million.

FOX 2 - Landscaper Joe Vella is such a sweet talker that people have been giving him tens of thousands of dollars for years. But he's the only one smiling.

Even though his customers aren't happy, Vella doesn't have a care in the world. We caught up to him outside the Livingston County Courthouse where he's a defendant in a criminal case and has been ordered to pay back more than $1 million.

But he's not worried - not about the criminal case, money, or with FOX 2's Rob Wolchek, who has quite the long and winding story to tell about Joe Vella. So, maybe he should be concerned.

That day, Vella said he would blow Rob's mind.

Well, this was his chance, right?

"I hear you sir I just don't know what or what I can't say," Vella said.

He's a delightful defendant and the lighthearted landscaper has got a ton of problems.

But he's also got a lot of angry customers, giant settlements, felony criminal charges, claims that he's broke, and is facing foreclosure.

"He's just a horrible, horrible person," said Reggie, one of his ex-customers.

Vella even claims he's been beaten up.

Despite all of this, he's still smiling and promising to tell a great story.

"We gotta get into this man ... we gotta sit down and do this together, brother. It's gonna be amazing," he promised.

We're ready for an amazing story from the happy-go-lucky landscaper who also claims to be a big fan.

Reggie talked with us back in April after he hired a company to tear out a patio at his Canton home and build a new one. The company was Joe Vella's Exterior Management Services (EMS).

"He came out in a company vehicle ... so everything just seemed legit," Reggie said.

He paid Vella several thousand dollars as a down payment in the late summer of 2020. On Sept. 9 of that year, Vella texted and said Reggie's house was next.

Reggie replied ‘I can’t wait!' But he'd be waiting a while.

"Good afternoon Joe. I'm sure you're aware of the inaccurate time frames you have been giving us regarding the completion of our project."

Joe responds, "Hey Reggie, I’ll have your landscaping done and your concrete done, in the next two weeks."

That didn't happen and, by May 2021, Reggie finally took Joe to court. 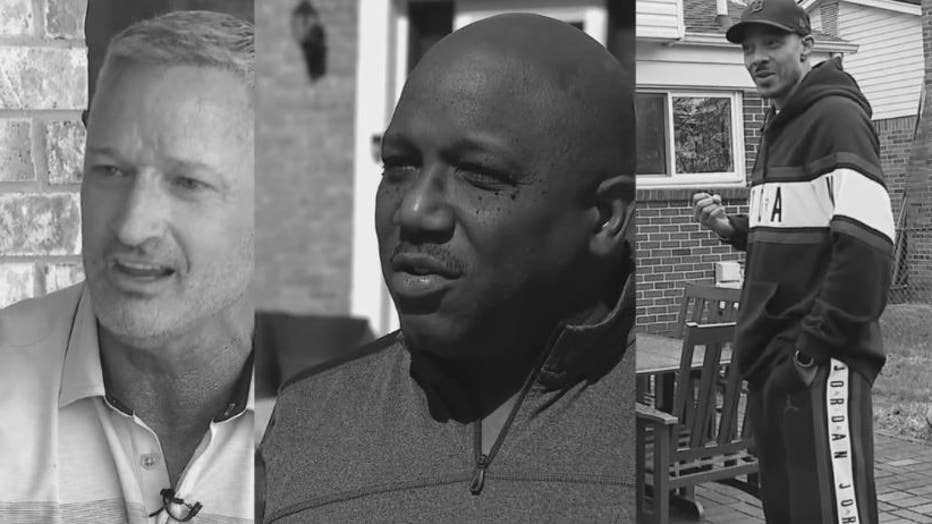 Some of the customers who say Joe Vella took their money and never did the work.

Another client, Gerry, had the same story. He was supposed to also have a patio pulled and replaced and gave Joe $4,000 as a down payment but never got anything from Vella, so he sued and won - but hasn't seen a dime.

Before we learn more about customers who claim they've gotten a shady deal, let's check out some of the weird stuff that happened when Wolchek tried to track him down.

It was tough to find him but we eventually did at a home in Howell. We found his white truck and watched it leave one day and head to a liquor store. But Vella wasn't driving it, it was his friend David. He claimed to not know where his buddy was, so we went back to his house and knocked.

His son answered and said he would tell his dad to come outside.

For two hours, we waited outside in 85-degree July heat for him to come out - and Vella's truck returned with his buddy Dave in it. We asked David to talk to Vella about coming out to talk with us.

He went back inside. This went back and for a while until David came back.

But, Vella did say he would meet the next day at a church picnic area in Howell at 3:30.

So we went there and waited …. but he was a no-show.

The next day, Vella sent a message saying his father had a heart attack, so we decided to give the guy some time.

"I think he's the ultimate con man," Mike said. "He comes there with full intentions of ripping you off.  And I think that makes him a special kind of individual."

Mike hired him to build a seawall and a deck on the water behind his home. He said Vella used a backhoe to move a bunch of dirt around but did much - except for digging a hole. 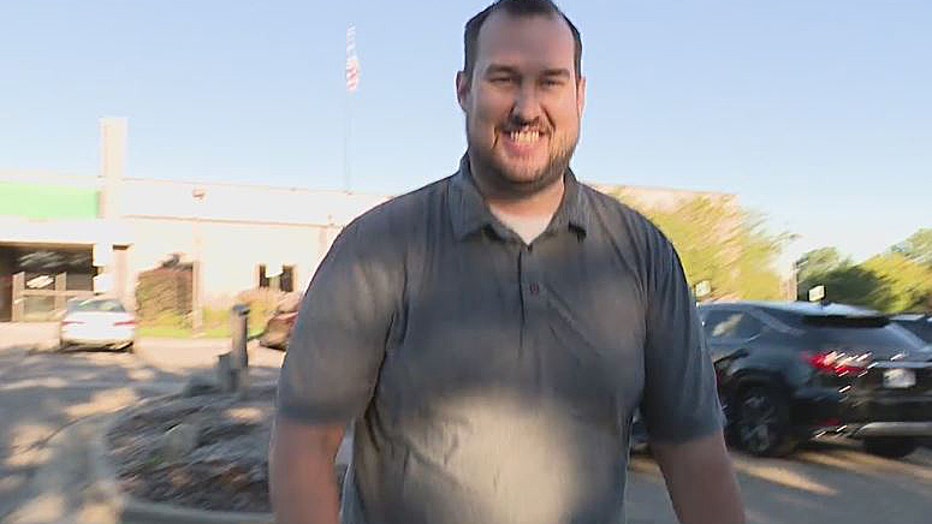 "All in all it probably took about 5 or 6 weeks before we realized there was a real scam going on here," Mike said. "He basically left and never came back."

That's still not all of it. Prestige Freight wrote several enormous checks, totaling almost $400,000, to Vella's company. The trucking company paid Vella's business to fix up one of its yards but claims Vella kept putting the work off for six months.

According to court documents, they finally showed up: "One day in June 2021, defendants appeared on the work site and moved some dirt and dumped several trucks of gravel on the site."

But apparently, that was it: "After that day in June 2021, no other work or services have been performed by the defendants."

Prestige Freight sued for fraud, negligence, unjust enrichment, and more. They won a default judgment of more than $1.1 million against Joe Vella and his business partner and wife, Catherine.

Catherine is listed as the owner of EMS, even though Joe does all the talking.

The Vellas filed for Chapter 7 bankruptcy in late 2021.

Poor Joe is broke and hurt. Maybe he hurt himself trying to finish all those landscaping jobs? Maybe he fell off a backhoe or into a hole installing a sprinkler system?

Joe got hurt at a strip club.

According to his own lawsuit against BT's Executive Club, Joe got roughed up by a bouncer and now he's suing.

"On or around April 29, 2022, Defendant, John Doe (the bouncer) used unnecessary, unprovoked and excessive force on plaintiff while he was a patron at BT's during normal business hours," the suit read. 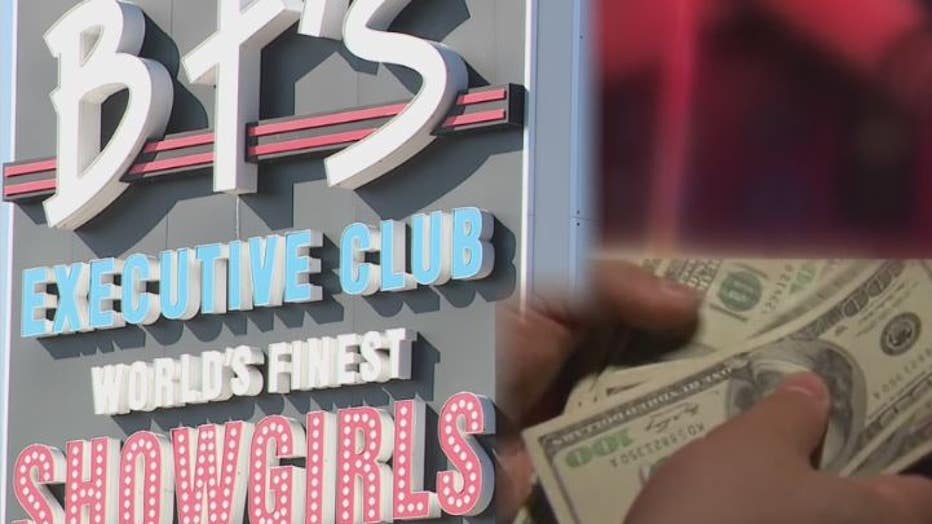 Can't a guy who filed for bankruptcy, charged with four felonies and out on bond just go to the strip club?

Oh that's right - Joe Vella was charged criminally in Livingston County with three counts of felony check fraud and one felony count of taking money under false pretenses over $50,000.

That's what brought him to court, when we were finally able to catch up with him.

Ah, if only. He says he can't talk until his lawyer gets here.

But what happened to the money?

Then Rob brought up some of Joe's victims - who aren't even related to the court case. Certainly, Joe can talk about them but it seems he doesn't remember Reggie or Mike, the latter of whom called Joe a conman.

There's more he says he doesn't know about either. Remember when he stood us up because of his dad's heart attack?

"I never said that to you sir," he said.

But he did - he sent the text.

Despite this, Joe said he's still got a story to tell.

"I've watched every single video of yours. I get it. It's shock and awe value. But there's another value. That other value is when you have a case like this, at the end of it you say they're in the Hall of Shame. I think there's an opportunity for someone who's accused of the bad things to show their side of the story," he said "As you said you'd always hear my side of the story."

We want to tell his side. We have a camera and a microphone there but Joe says he'll talk after court.

Only then, his attorney, William Amadeo arrived.

Court wraps and, again, Joe won't tell this ‘great story’ he's just dying to get off of his chest.

"Well you're following him as he's leaving court bro," his attorney said.

Thank you ‘Vella’ much Joe, you're in the Hhhhhallll of Shame!

Wolchek contacted BT's about the lawsuit but received no response.

Vella's attorney sent an email saying Joe had "an abundance of money stolen by others" and filed reports to that effect. One report was filed in October of 2020 - that was two months before Joe started cashing those large checks from Prestige Freight - so it wasn't that money that the thieves got.

Joe's attorney also says things are being done to have all parties reimbursed - but he didn't say what things.

Joe's next court date on those criminal charges is in October. 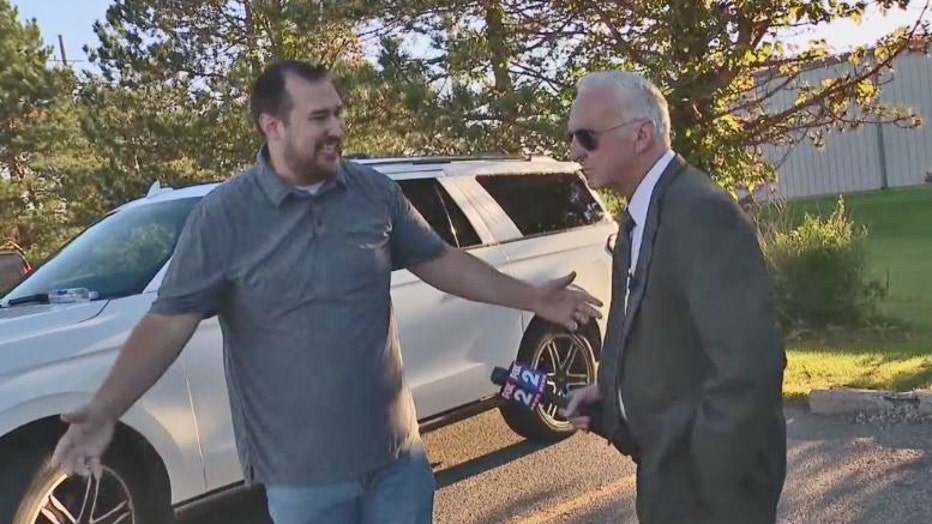