WASHINGTON - Already comfortable as an outlier in her party, Democratic presidential candidate Tulsi Gabbard did not support the impeachment of President Donald Trump, voting “present” Wednesday on two articles that cleared the House.

In a lengthy statement released after the House charged the president with abuse of power and obstructing Congress, Gabbard said that Trump “violated public trust” but that voters would be able to hold him accountable in the 2020 election.

RELATED: House votes to impeach Trump for abuse of power, obstruction of Congress

The Hawaii congresswoman, a periodic Trump defender and long an impeachment skeptic, framed herself as a rational centrist between two partisan mobs. Republicans, she wrote, were “blindly” defending the president and “abdicating ... legitimate oversight,” while Democrats were driven by an “extreme” characterization of the president as a would-be dictator. 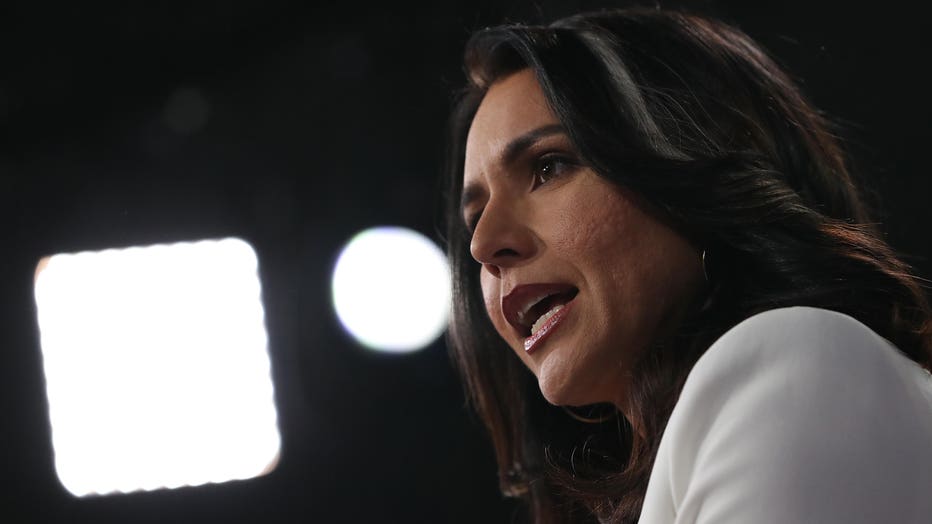 “I could not in good conscience vote against impeachment because I believe President Trump is guilty of wrongdoing,” she explained. “I also could not in good conscience vote for impeachment because removal of a sitting President must not be the culmination of a partisan process, fueled by tribal animosities that have so gravely divided our country.”

Gabbard noted that she voted for the impeachment inquiry three months ago and has since introduced a resolution calling for Trump's censure after disclosure that he asked Ukraine's president to help investigate already debunked allegations of corruption against former Vice President Joe Biden, who is also seeking the 2020 Democratic presidential nomination.

Trump, Gabbard's resolution states, abused “the powers of his high office," when he “solicited the interference of Ukraine in the 2020 United States Presidential election.”

The two House articles set up a Senate trial that is all but certain to end in Trump's acquittal.

RELATED: Pelosi refuses to say when, if articles of impeachment will be sent to Senate

Gabbard was one of just a handful of Democrats who did not back impeachment. Two Democrats voted against the first article: Rep. Jeff Van Drew of New Jersey, who is considering switching parties to become a Republican, and Rep. Collin Peterson of Minnesota, whose district went overwhelmingly for Trump in 2016. Those two and freshman Democratic Rep. Jared Golden of Maine also voted against the second article.

Trump, at a rally Wednesday night in Michigan, celebrated that “three Democrats went over to our side.”

Gabbard has defined her quixotic presidential bid with atypical positions. A military veteran still serving as an Army National Guard officer, she has blasted U.S. foreign policy and its bent to military intervention while also defending Trump and his cozy relationship with Russia. She used the Democratic presidential debate stage to aggressively attack California Sen. Kamala Harris. And she got into a caustic public back-and-forth with Hillary Clinton, the 2016 nominee.

Clinton seemingly started those volleys with an indirect rebuke, suggesting that Russia is using Gabbard in the 2020 campaign. Clinton produced no evidence that Moscow is directly backing Gabbard, but Russian state-owned media and a number of alt-right websites have promoted the congresswoman’s Democratic campaign, and the Russian Embassy has defended her on Twitter.

Gabbard retorted by calling Clinton “the queen of warmongers ... and personification of the rot that has sickened the Democratic Party for so long.”

RELATED: Impeachment proceedings: Here’s what it means and what happens next