(FOX 2) - A landmark in Romeo went from being a symbol of hope to a symbol of hate after someone defaced a message of support for the Black Lives Matter Movement and left a racial slur in its place. But the community is coming out to show this is not what they stand for.

“I was actually very disappointed. I've been a member of this community for over 10 years and I think that it's important for all of us, not just African Americans, to support the black lives matter movement. We are here to embrace equality and promote change,” said Romeo resident Clareese Crigler.

Demonstraters gathered to promote equality after a message supporting the Black Lives Matter Movement was painted over with the n-word.

“I want to say I'm glad it happened so people can see what's really going on out here in our community. I know a lot of people think not Romeo but it is here and this is an eye-opener,” Shalanda Woods, Local 400 civil and human rights representative.

Community activists say the trouble started on Saturday. Hours after Roxanne Cushingberry and her daughter painted Black Lives Matter, someone drew a line through their message and wrote All Lives Matter.

Activists changed the message back but woke up to a new message Monday morning painted on the rock: “F*** BLM N******.”

That was the final straw. Dozens demonstrated while the Macomb County Sheriff’s Office took a report. The Washington Township supervisor calls the racist message deeply hurtful and says it doesn’t reflect their community. Meanwhile, people have their own message for who is responsible. 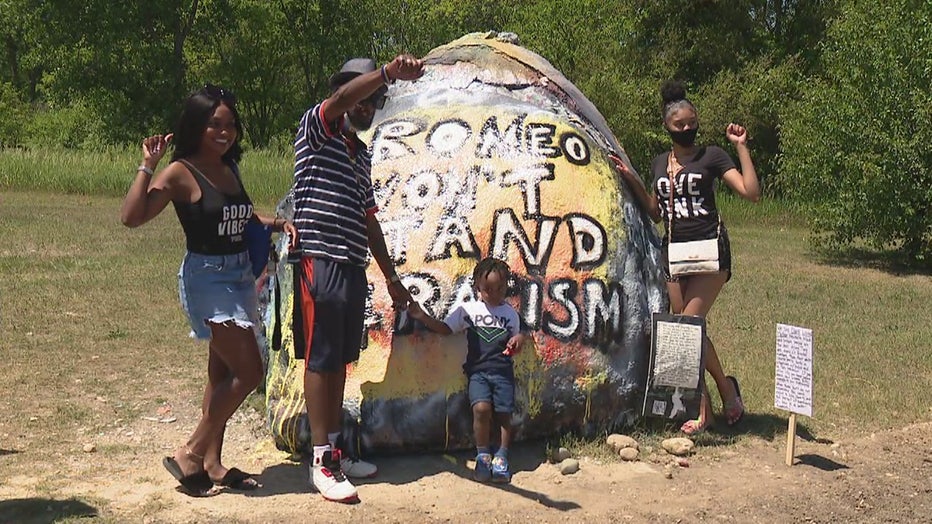 “To not be immature about this. Again, take a step back and look at it from a different perspective. We are all fighting for unity. I don’t think violence is the answer,” Crigler said.

A march will take place near the rock on Friday denouncing racism.