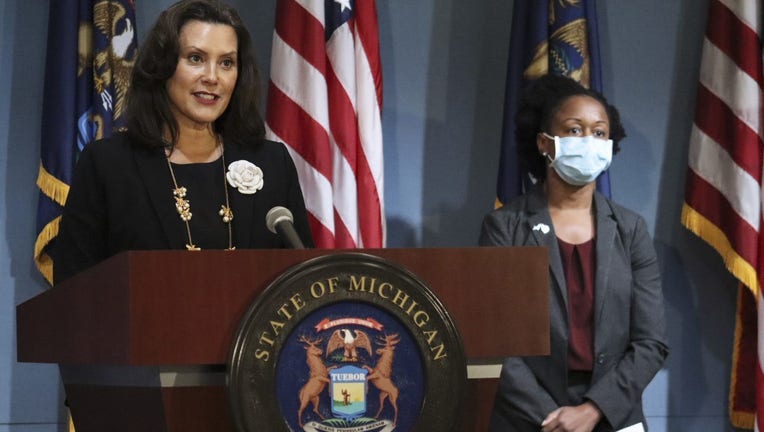 (FOX 2) - The Department of Justice is requesting data from Michigan Gov. Gretchen Whitmer in regard to the COVID-19 order that may have resulted in deaths of elderly nursing home residents.

The data is being requested to help inform whether the Department of Justice will initiate investigations under the Civil Rights of Institutionalized Persons Act (CRIPA).

The DOJ is asking for the following information from Gov. Whitmer:

The information requested is due within 14 days.

You can see the letter sent to Gov. Whitmer here.

... "This is nothing more than election year politics by an administration that is more concerned with the president's re-election campaign than protecting Michigan seniors."

Gov. Whitmer's office released the following statement later in the day Wednesday after receiving the letter:

"Protecting the health, safety, and wellbeing of our seniors and most vulnerable residents has been a top priority throughout this crisis. The fact that this letter was sent during the middle of the Republican National Convention week to four Democratic governors should make it crystal clear that this is nothing more than election year politics by an administration that is more concerned with the president's re-election campaign than protecting Michigan seniors. We will review this letter and respond as appropriate, however, Americans would all be better served if the Trump administration stopped the partisan games and focused on delivering a real plan to defeat COVID-19."

“This is nothing more than a transparent politicization of the Department of Justice in the middle of the Republican National Convention.  It’s no coincidence the moment the Trump administration is caught weakening the CDC's COVID-19 testing guidelines to artificially lower the number of positive cases, they launched this nakedly partisan deflection. At least 14 states - including Kentucky, Utah, and Arizona - have issued similar nursing home guidance all based on federal guidelines - and yet the four states listed in the DOJ’s request have a Democratic governor.  DOJ should send a letter to CMS and CDC since the State's advisories were modeled after their guidance."

In a town hall with FOX 2 back in July, Gov. Whitmer said she was following the best advice she had at the time when making this decision.

Whitmer said that the state was following guidance from the Center for Disease Control and prevention when COVID-19 patients were housed with non-coronavirus patients in nursing homes.

"We know that this experience has played out across the planet frankly but we’ve seen it in real-time here in the U.S., first in Seattle then of course across the U.S.," she said. "In every step of the way we've followed the CDC best guidance and our policies reflected that. All of the efforts that we've taken to keep people safe by closing down the ability for outsiders to come in, our policy with regard to...we never once required that nursing homes took COVID-19 patients. Many chose to and when they did they followed the promulgated practices from the CDC about separation and not having intermingling at all," she said.

And she did admit that following best practices ended with lives being lost to the virus.

"In the early days, following the CDC was the gold standard. That's what we were doing," Whitmer said. "Our nursing home death numbers are far too many but are better than in many other states. At the time we followed the protocols the CDC has prescribed."

In the end, Whitmer said if she had the knowledge she has now, she would do things differently but says it was CDC guidance.

"We followed the protocols that they prescribed and that's the best any state was able to do, frankly," she said. "We always have a mindest we are going to be conservative and follow the science. And sometimes that makes us a leader and in other ways, it's made us average with other states. With nursing home experiences, it's the latter."

The Department of Justice’s Civil Rights Division is evaluating whether to initiate investigations under the federal “Civil Rights of Institutionalized Persons Act” (CRIPA), which protects the civil rights of persons in state-run nursing homes, among others.

The Civil Rights Division seeks to determine if the state orders requiring admission of COVID-19 patients to nursing homes is responsible for the deaths of nursing home residents.

According to the Centers for Disease Control, New York has the highest number of COVID-19 deaths in the United States, with 32,592 victims, many of them elderly.

In contrast, Texas’s death rate by population is 380 deaths per million people; and Texas has just over 11,000 deaths, though its population is 50 percent larger than New York and has many more recorded cases of COVID-19 - 577,537 cases in Texas versus 430,885 cases in New York.

Florida’s COVID-19 death rate is 480 deaths per million; with total deaths of 10,325 and a population slightly larger than New York.