DETROIT (FOX 2) - The only thing better than Keith Bynum and Evan Thomas' wide smiles is their story catalyzing those grins.

Straight out of a TV show that would air on HGTV, both Bynum and Thomas are spending their days in Detroit flipping houses for modest profits. And on Monday, they took FOX 2 through their latest project.

Duo flips Detroit houses, starting with their own neighborhood

A duo of Denver residents now living in Detroit are flipping houses in the city - and they're starting with their neighborhood. Keith Bynum and Evan Thomas, two residents of northwest Detroit are purchasing some of the worst homes in the city and fixing them up and selling them. The profits aren't big, but more people are moving into their neighborhood as a result of their pet projects. And they're hiring locals to help with the labor.

They're not lying. The empty home located on the northwest side of the city is filthy, with messes in every room. But where some might see rejection and a housing crisis, these two flippers see opportunity.

Transplants from Denver who now live on the same block as their newest project, both are transforming some of the worst houses in Detroit.

"It takes some imagination, but that's what Keith is here for," Thomas said. "New windows, new electrical, new plumbing, pretty much everything when we come through is new."

The two moved to Detroit two years ago and started buying properties from the city's Land Bank Own it Now Program. Each property costs about $1,000 and costs between $40-45,000 to rehab. After several weeks of work, they'll sell it for around $60-$70,000 each.

The profit margin isn't big, but it's enough. It's also leading to more people moving into the neighborhood - their neighborhood.

"It's a super gradual process but I feel like we're getting there - even in just the short two years that we've been here," said Bynum.

Despite this storybook tale, things weren't always perfect. They've had their car crashed into and a gas leak down the street cause an explosion. But persistence has led to progress, and a neighbor to the first house they fixed up can't be happier with their work.

"Hiring people to help them out, do whatever - matter of fact, (they're) hiring me. I'm going to be painting the house back of me," said Lisa Carter.

They're working as efficiently as possible, too. Where the two can, they save furniture and recycle building materials - best practices in the rebuilding world and part of a burgeoning field of study called domicology. If they don't already own the materials they need, they purchase furniture and materials at Restore, Craiglist, hardware stores, estate sales, and thrift shops.

"The true passion is the actual design part of it," Bynum said. "Accenting all of it and putting it all together. It's just using as much creativity with as little money as possible." 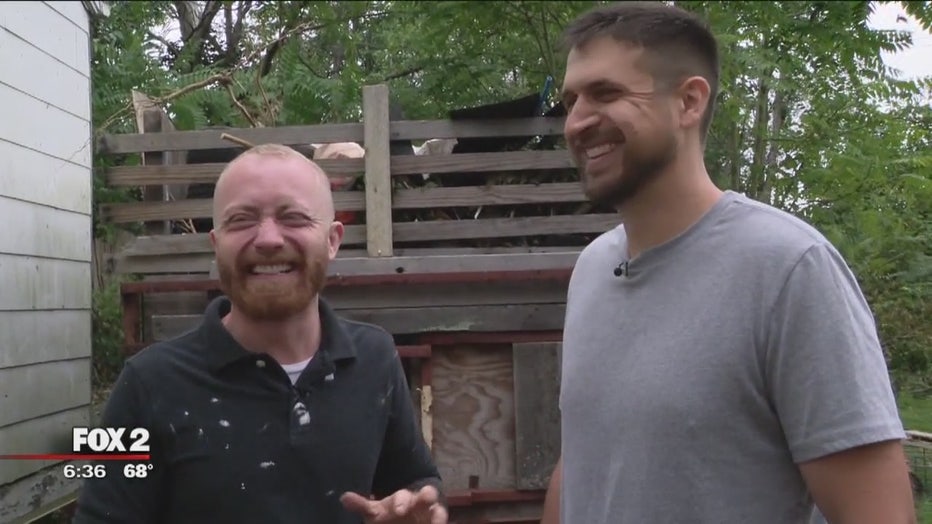 The house flipping has spurred on an ancillary business of retail. The two own a store called NINE Furniture + Design in Ferndale. People who purchase their homes can also purchase any furnishings found in the store for about $3,000 more.

"Furniture to the art to the accessories - you can just walk in with your clothes and you're good to go," said Thomas.

"I want people to walk in and be like, 'I want to paint a painting right now. Like I have to live here,'" said Bynum

So far, the two have completed six homes and have three more in the works.

"Detroit is like a big bear hug - I love Detroit," Bynum said. "It's just been a really fun experience so far."