DETROIT (FOX 2) - Michigan has the most number of engineers per capita in America but what about the future? Look no further than Durfee Elementary in Detroit to find innovators who aren't even old enough to drive -- yet their solutions will impress you.

More than a dozen students placed in the top two in both regional and state competitions for robotics. They had to come up with solutions for real life problems.

More than a dozen students placed in the top two in both regional and state competitions for robotics. They had to come up with solutions for real life problems.

"This project is about abandoned houses and everything that's trapped in there," said one student.

"We want to help animals because some animals get stuck in abandon houses and it makes us feel bad," said another.

The other winning Durfee team has a solution to lead pipes stretching across thousands of people's neighborhoods in Detroit.

"We read articles online and we met with a woman who is an engineer who helped save water in Flint and Detroit. She showed us how to tell if a pipe is made from lead," said another student.

One part was research, the other part was designing a robot that could travel autonomously and solve the problem.

"Our team number one won second place for innovative solution at the Michigan State Championships," said Kate Hayman, coach. "That is the research portion of the program. They do a robot and they also do a research portion. And it's always based on a real world problem these young people are going to have to solve."

The mayor came along with another city executive who is a product of Detroit Public Schools, Palencia Mobley. Mobley is the deputy director and chief engineer of the city's water and sewage department.

"It meant a ton for me to see our children at such a young age so excited about a real world problem," she said. "And to see this be their first time, and for them to do such a great job and to place, that was amazing to me," said Palencia Mobley.

"To see them solving problems of the future and winning the robotics competition and when they were asked where do they want to go for a celebration party, they wanted to go back to the Michigan Science Center," Mayor Mike Duggan said. "It's very inspirational and very impressive to see what they did.":

Two coaches helped in the making of these champions, along with student mentors from Bloomfield Hills. The future is looking bright not just for these students but for the city when these kids become engineers and architects of tomorrow's Detroit. 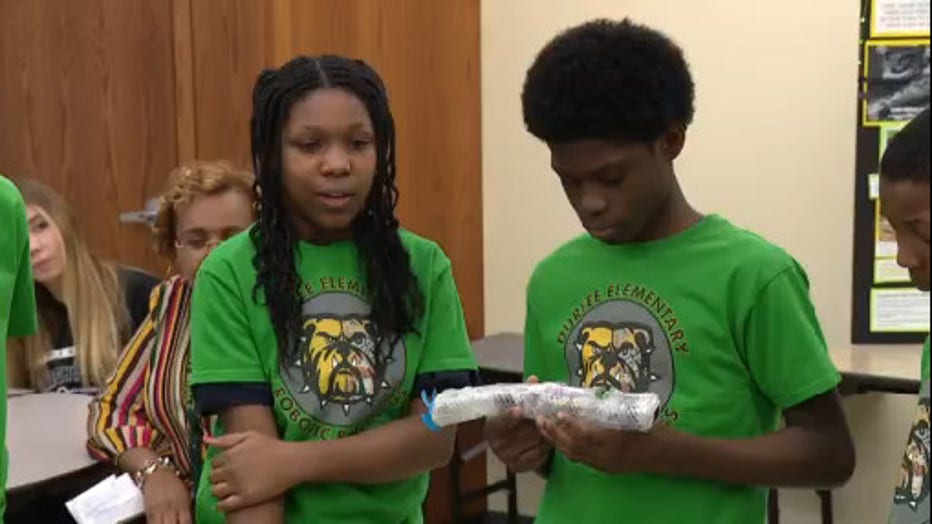