ROMULUS, Mich. (FOX 2) - A Detroit native and former football star who was imprisoned in China for the last three years came home Wednesday.

The family and friends of Wendell Brown crowded the arrivals area at Detroit Metro Airport just before 6 a.m. to see his arrival. He was greeted with tears and hugs.

Sea of tears and hugs: Wendell Brown sees loved ones for first time in 3 years

"Thank you all so much; I love you all so much," he said between hugging different family members. "We can smile, we can laugh, we don't have to cry no more!"

Brown was sentenced to prison back in 2016, charged with intentional assault after he was involved in a bar fight. The former Detroit King and Ball State University linebacker was coaching and teaching football in China at the time.

Brown was released from prison on Tuesday, and his mother met him in California and the pair flew back to Detroit together.

"We already got a big Thanksgiving meal planned for him when he gets home," his mother Antoinette Brown-King told us earlier this summer when they got his release date. "I know he'll probably have to adjust to his eating, but we're ready to help move forward." 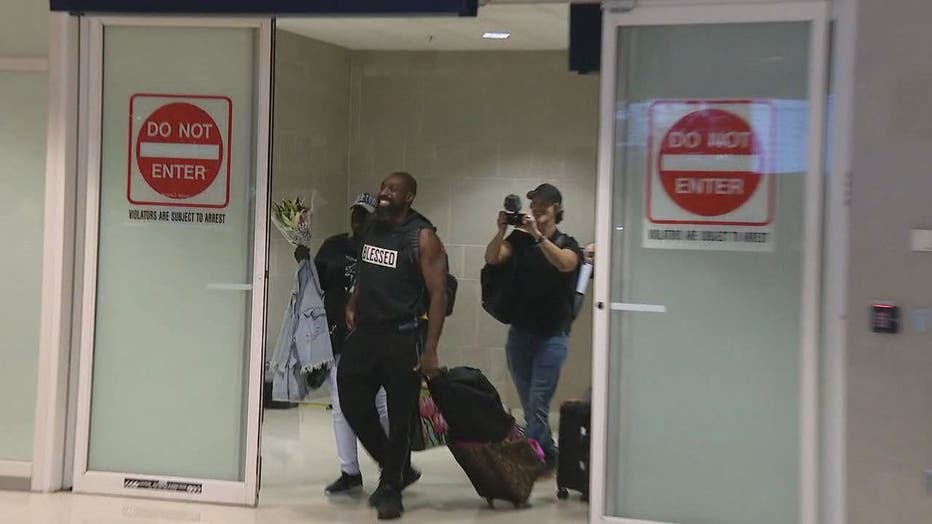 Brown and her family have been waiting for a while. Brown was originally given a four-year sentence, which would have left him jailed until the fall of 2020. It took two and a half years for him to get an official phone call back home.

"That was rough," Brown told us. "We were used to speaking every day."

But then after an appeal in 2018 his sentence was reduced by one year - and that's when he was finally granted a video phone call with his mother.

Antoinette and others sent letter after letter to Brown, to keep him strong while in jail. They also created a GoFundMe page that raised tens of thousands of dollars, which later was used as restitution to help free him.

Brown has maintained his innocence after he says he was defending himself in an attack, which was supported by video evidence.

Brown, a star football player from Detroit who played football at Ball State, went to China to coach and teach American football to children. During his tenure, he was at a bar celebrating a friend's birthday when a fight broke out.

Individuals were intoxicated and bottles were thrown. While Brown never instigated the fight, he remains the only one who was arrested from the night's event. He was jailed in China ever since.

The family made numerous attempts to help free Wendell, going so far as to contact the U.S. President. Any progress on their side was met with stonewalling and static bureaucracy from the Chinese government.

Filmmaker Matt Liston has been following and filming Brown's plight, and plans to turn it into a documentary. He got to meet Brown at the airport.

"I've been corresponding with him for a while now through letters, and to see him, I feel like this is a dream," he said.

"I'm happy to be home, finally. After all these years, after all these years of pain and suffering I finally get to celebrate with my family. I'm home. I'm back on American soil, glory be to God! It's a celebration," Brown told us.

You can see the tearful moment he was reunited with his loved ones in the video player above.

He says he's looking forward most to eating and laughing again with his family.