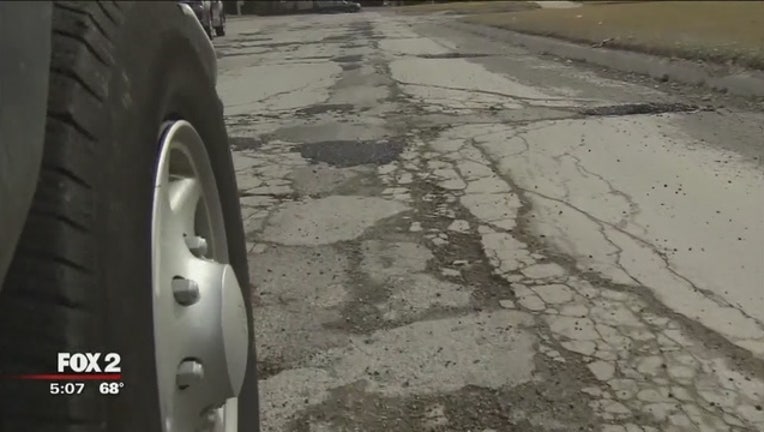 (FOX 2) - The irony is almost too beautiful to admit, but according to WalletHub it's true.

The Motor City, the birthplace of American mobility that drove much of our country's sprawl across its landscape, is the worst city to drive in.

The dismal score should be taken with a grain of salt, as this is a personal finance website that's compiling these numbers.

Regardless of what kind of authority the website speaks with, the ranking did raise the ears of the Fix MI State campaign, an advocacy tool that lobbies on behalf of the Michigan Infrastructure Transportation & Association (MITA). They put out a post advertising the website's ranking and need to increase funding for Michigan's roads and infrastructure.

"A recent WalletHub report reiterated the obvious: Michigan's roads suck. But it took it a step further - it examined the 100 largest U.S. cities, ranking them from best to worst to drive in," reads their Facebook post. "Detroit fell quickly into last place - IN THE NATION. 😱😤"

"It's not a surprise that anyone ranks the city of Detroit or somewhere in Michigan at the very bottom as the worst with the worst roads," said Lance Binoniemi, the vice president of government affairs at MITA. "We've seen other studies or polls showing Michigan is one of the worst states."

Binoniemi said the state needs new revenues to offset what is going to be an increasingly expensive fix. That sentiment might be a frustrating one to hear with Michigan's budget negotiations reaching a fever pitch of sorts. In her first year as governor, Gretchen Whitmer has stirred the pot by asking for an increase in road funding for the state's crumbling roads. That request has been rebuked by Republican-controlled House and Senate bodies.

If readers need any more validation that Michigan is in dire need of more funding for its infrastructure, Binoniemi directs anyone curious to the state's 2018 infrastructure report card: a D+. By high school grade standards, that is a literal failing grade.

"The ASCE ranking, which is put out by civil engineers, are the best experts for looking into this," said Binoniemi.

The American Society of Civil Engineers called infrastructure the "backbone" of the state's economy. It also said most of Michigan's infrastructure is old and outdated.

"In older Michigan cities, some systems date back to the late 1800s. For close to a decade the state suffered from a poor economy, resulting in Michigan under investing infrastructure repairs and replacement," reads the report. "Imagine not changing your car's tires for 10 years."

The report card paints a grim picture for how "the best experts" feel about Michigan's infrastructure. Even so, Binoniemi is encouraged by what he's seeing happen in Lansing. It's coming in the form of more debate about revenue and having a governor that supports increased revenue for the purpose of improving the state's infrastructure.

The acknowledgement of how bad Michigan's infrastructure problem didn't come from an online ranking site however. In 2016, the 21st Century Infrastructure Commission released a report that was authorized by former Gov. Rick Snyder. It found the state needed to increase state funding by $2.63 billion for roads, bridges and multimodal transportation.

Binoniemi said there more encouraging news on the horizon, too. Both sides of the Michigan state legislature have introduced infrastructure reform packages. The 10-bill package engages local agencies and calls for more robust plans for how the state's agencies will improve the state's infrastructure.