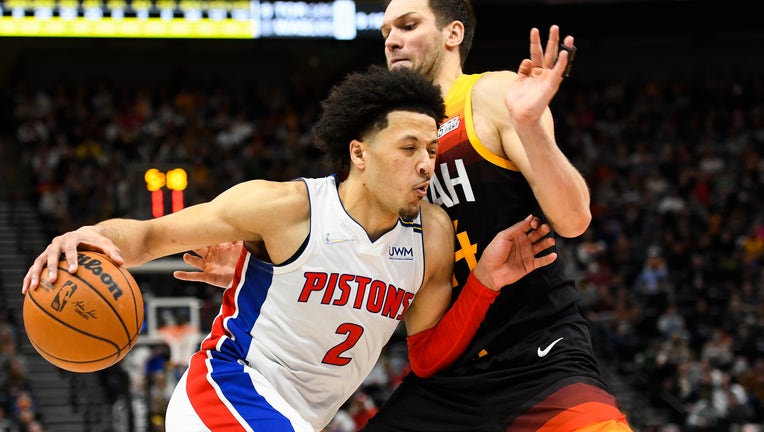 SALT LAKE CITY, UTAH - JANUARY 21: Cade Cunningham #2 of the Detroit Pistons drives into Bojan Bogdanovic #44 of the Utah Jazz during the second half of a game at Vivint Smart Home Arena on January 21, 2022 in Salt Lake City, Utah. NOTE TO USER: User

(FOX 2) - The Detroit Pistons will play their first-ever basketball game in France next season when they face off against the Chicago Bulls as part of the NBA Paris Game 2023.

Scheduled for Jan. 19, 2023, Detroit and Chicago's regular season game will take place at the Accor Arena in Paris. Tickets have yet to go on sale.

Any fans interested in attending can get presale information by visiting NBAEvents.com/ParisGame.

This won't be the first international competition for either team. The Bulls have played in Paris twice before when they played in two preseason games in 1997. Meanwhile, the Pistons have played in London and Mexico City over the past decade.

Their trip to France will also feature Cade Cunningham, who headlines a young cast of upstarts as Detroit hopes to build on last season's successes. Much of it was found in the second-half of the season.

This will be the first NBA game in Europe since 2020 and the 12th in France since 1991. The last time a game was played was months before the COVID-19 pandemic froze sports.

"The Detroit Pistons organization is excited to take on the Chicago Bulls and play our first-ever game in France. Playing a regular-season game in Paris will be a great experience for our players and coaches and we look forward to showcasing Detroit Basketball to an international audience," said Pistons General Manager Troy Weaver.