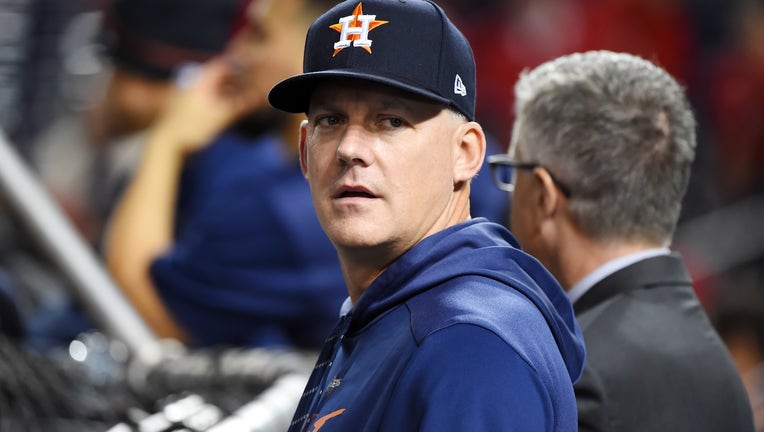 WASHINGTON, DC - OCTOBER 26: AJ Hinch #14 of the Houston Astros looks on during batting practice prior to Game Four of the 2019 World Series against the Washington Nationals at Nationals Park on October 26, 2019 in Washington, DC. (Photo by Will Newt

DETROIT (FOX 2) - When the 2021 Major League Baseball season opens up, the Detroit Tigers will be playing with a new leader in the clubhouse after hiring former Houston Astros manager A.J. Hinch to lead the team.

The Tigers announced Hinch as the 39th manager in franchise history to take over for Ron Gardenhire who retired in September.

Hinch, a former Tiger in 2003, managed the Astros from September 2014 until January 2020 when he was fired after the team was caught up in sign-stealing. The investigation revealed that Hinch did not approve of players using a replay monitor to decode signs and even wrecked the monitor. However, he did not take any steps to stop it or explicitly tell the team that he disapproved.

He was harshly criticized by MLB Commissioner Rob Manfred and was suspended for the 2020 season. Manfred warned if he committed further "material violations" of baseball rules, he would be banned for life.

Hinch said in a statement that missing the past year has been challenging but thanked the Tigers for giving him another chance.

“I’d like to thank Chris Ilitch and Al Avila for giving me a chance and the opportunity to get back in the dugout to lead this historic ballclub,” said Hinch. “The last year was the most difficult of my life. It gave me time to reflect, which was such a big part of this process. Everything that has transpired over the past year, personally and professionally, has put so much in perspective for me, and re-enforced how important it is to do things with integrity and honesty.”

Hinch said he expects to fit in with the team and fans.

“My feelings towards baseball are the same that so many Detroiters have for this team. Through thick and thin you always care about it and rely on it to be there as a part of your life, and I’m so proud to play a role in growing that tradition here with the Tigers. Having a talented young core of players, dedicated leadership group and passionate fan base was exactly what I was looking for in a team, and it’s clear we have that here in Detroit. It’s time to start playing winning baseball, and I am confident this organization is positioned to make that happen.”

Over seven years, Hinch has a combined record of 540-452 with four playoff appearances in five seasons in Houston, plus two American League Pennants and one World Series Championships.

“Coming into this managerial search we already knew that A.J.’s diverse baseball acumen, knowledge of analytics and passion for the game were second to none,” said Al Avila, Detroit Tigers Executive Vice President of Baseball Operations and General Manager. “However, we also knew there were some important conversations to have about A.J.’s time in Houston. Throughout that dialogue he was clearly remorseful and used that time to reflect on the situation, and we believe he will emerge as a better leader because of it. This ballclub is entering an extremely exciting period, with young players primed and ready to make an impact at the Major League level. I’m confident A.J. is the best man for this job as we strive to bring a World Series Championship back to the city of Detroit.”

Advertising: Download the FOX Super 6 app for free and you can win a $100,000 jackpot! Download here now.