GAYLORD, Mich. - The Department of Natural Resources is looking for help into the illegal poaching of a bull elk at one of Michigan's state forests.

The head of an elk was found in the Pigeon River State Forest, about 20 miles northeast of Gaylord in the upper portion of the lower peninsula.

Conservation officers out of the Gaylord office were contacted on Monday that they had found the dead elk. Enforcement suspects the elk was likely killed Saturday or Sunday. A lieutenant out of the 3rd district said they were following up on leads.

"We hope that the public can help us with this investigation, as they have always been helpful in the past," said Lt. Jim Gorno. "This is flat out poaching. A majestic elk was killed for no reason and left to rot." 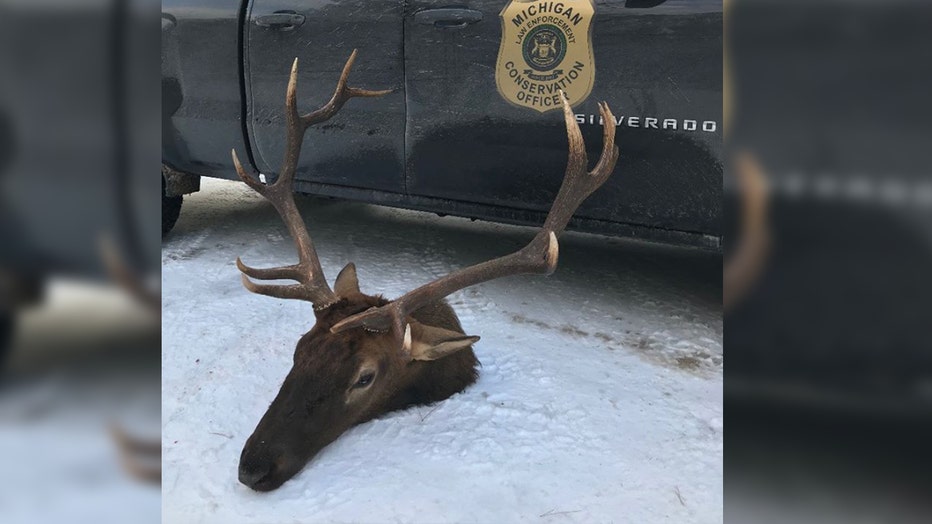 Punishments for poaching in Michigan aren't light. The misdemeanor is punishable by a $500 fine and up to one year in jail, although that a judge can add on more if they see fit. It also comes with a revocation of a hunting license that can be as long as four years. While the DNR deals with poaching incidents every year, Gorno said often they are mistakes.

"They either find out elk were killed in the year or there is a mistake. A few will shoot by mistake and turn themselves in," he said. "We'll work with them to lessen their issue and their fine."

"But I think this is just flat out poaching," he added.

The officer said they had evidence that pointed to that conclusion, although it's not the head placed at the base of one of their trucks. Gorno clarified officers cut off the head as part of a necropsy in the field.

Despite the ambiguity of the crime, Gorno said cases really incite the public and they have a surprisingly high prosecution rate of 50 percent in poaching cases. The elk herd is very regulated and when one is killed it can seriously impact the species management.

"It's just disregarding the law and a waste of a resource," Gorno said. "I don't want hunters to get a bad name, 99 percent of them are good. It's a great recreational activity and now you have this. I don't want to correlate that too hunting."