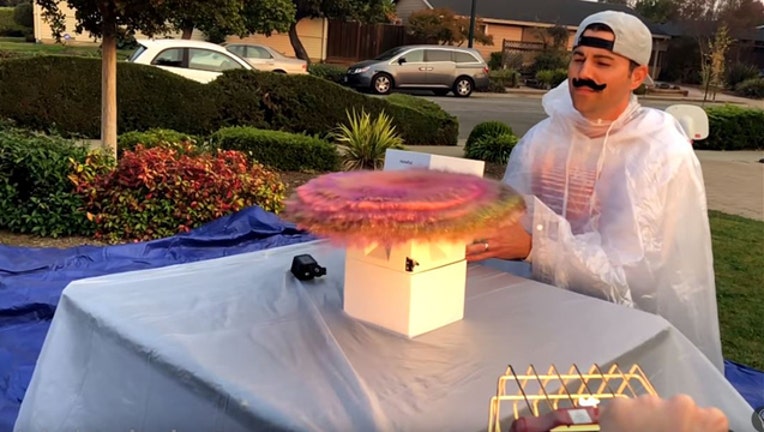 A NASA engineer, who literally helped build a vehicle that drives on Mars, was the victim of a porch thief. So he got his revenge - in the form of a massive glitter bomb.

Mark Rober is a NASA engineer and YouTube star and he knows what he's doing. So when someone stole a package from his front porch, he spent the next six months devising the perfect plan to stop it from happening again.

When the thieves hit, his security camera captured the crime - but he said police didn't investigate because they didn't have the time to track the thieves down.

So he spent the next six months building a custom-made "glitter bomb" hidden inside of a decoy package.

Remember, he's an engineer with access to knowledge and tools and equipment that many of us can dream of. He custom-build a package loaded with the glitter that not only shoots up, it shoots OUT, too!

He equipped it with four phones pointed at exactly the right angle to get the person, no matter where they stood near the package. He also set it up so he could upload the video to the cloud and track it down using GPS.

But he didn't stop. Just in case the thief wanted to keep the glitter bomb, he equipped it with a fart spray mechanism that sprays the gas smell five times every 30 seconds.

That's right. It's a glitter bomb/fart bomb/recording device in one.

He made the decoy box appear to be an Apple HomePod but it was sent from Kevin McCallister from "Home Alone" (and even includes the address of the home that was used for the exteriors), The recipients were the Wet Bandits themselves Harry and Marv - Kevin's enemies.

So...equipped with the phones, he was able to record the reactions of the thieves - and they are SO great! They can't believe that something like that ended up in their homes and cars! (The audacity of the stolen product getting you back!!!)

We hope you enjoy this video as much as we did - because it's just so good.

The video was posted Monday - it already has more than 8 million views.