DETROIT (FOX 2) - The occupants in a car that crashed into a house on Chalmers Tuesday afternoon were allegedly connected to a series of smash-and-grabs in Detroit that took place over the summer.

Detroit Police Chief James Craig announced at a press conference Wednesday the individuals were involved in a local street gang and had been believed to be involved in dozens of smash-and-grabs, one of which involved a gun.

The crash happened after a squad car attempted to pull over the sedan. The driver instead sped up before crashing into a house on Chalmers Street and erupted into flames. Two people, a male and a female, were killed instantly and three others were taken to the hospital.

Police believe the occupants were involved in at least some of 29 smash-and-grabs that happened over the summer.

"Whether they're part of a larger group or responsible for all 29 themselves, we're not certain at this point," said Assistant Chief David LeValley.

The most recent one happened Tuesday morning at a Foot Locker on 8 Mile when individuals walked out of the business with a "considerable amount of merchandise" and fled in a vehicle. That theft gave police a description of the vehicle that they later attempted to pullover around 3 p.m.

Craig said the driver sped off as soon as the police car turned on its lights, and that the crash happened so quickly his officers didn't even have a chance to pursue the vehicle. Craig said one of the officers could be heard on the police radio suggesting they not pursue due to the suspect's speed, and that he hadn't even declared the pursuit over when the crash happened.

Immediately after crashing into the home, the suspects' car burst into flames. Craig says his officers jumped out of their cars and tried to pull victims out and get the fire out with extinguishers. Three people were alive and were rushed to the hospital and two were killed, one of which was the driver. 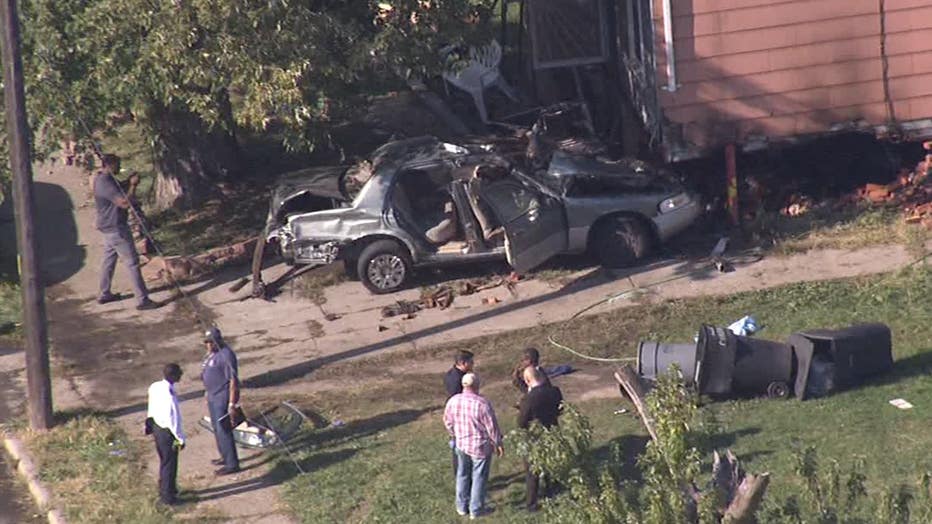 Craig said the driver, who has since been identified as 18-year-old Antonio Henley, was known to police as he was in a brotherhood mentorship program at the department that works to be a positive influence in the boys' lives, but Craig said the mentorship just wasn't successful in pulling him away from what he was involved in.

Craig refused to provide the name of the gang but said they operate on the east side of Detroit.

The other victim in the crash has been identified as 18-year-old Darshay Burrell.

After the crash, a family lawyer told FOX 2 he was upset with how the incident played out, saying he "didn't care about a string of robberies."

"None of these kids were charged in any armed robberies," said Attorney James Galen. "That's probably just an excuse as to why they are pulling people over."

Before the car crashed into the house, it collided with a Buick Rendevous at the intersection of Chalmers and Kerchavel. That driver of the Rendevous is expected to be okay.