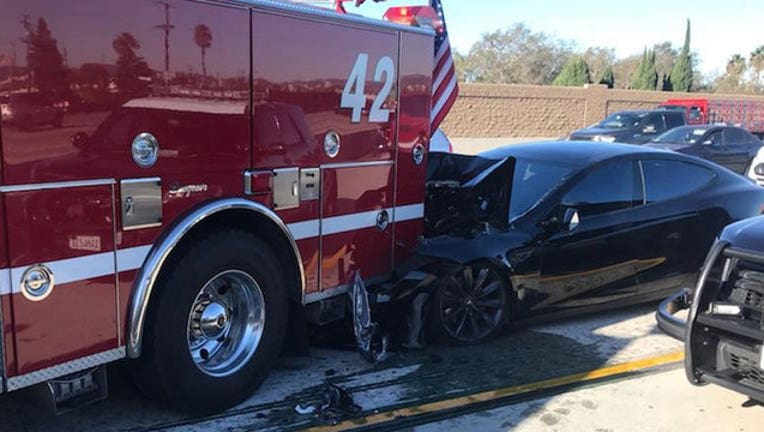 (WJBK) - A car crash on an interstate in California could be the first of its kind.

The driver told authorities their Tesla was on Autopilot mode when it crashed into the back of a parked fire truck on Interstate 405 in Culver City, Calif., on Monday.

Culver City Firefighters posted a photo of what happened on Twitter.

"While working a freeway accident this morning, Engine 42 was struck by a Tesla traveling at 65 mph. The driver reports the vehicle was on autopilot. Amazingly there were no injuries! Please stay alert while driving!" the tweet reads.

Tesla's Autopilot provides limited semi-autonomous driving aid, including the ability to steer itself within a lane and brake for obstacles in front of it.

Fire and police officials could not immediately confirm the driver's claim, according to The Mercury News. A Tesla spokesperson reiterated the company's position that Autopilot is "intended for use only with a fully attentive driver."

Tesla's Autopilot provides limited semi-autonomous driving aid, including the ability to steer itself within a lane and brake for obstacles in front of it.

Autopilot requires a driver to periodically touch the steering wheel to prove they are paying attention. If not, it will set off several alerts and then enter a safe shutdown sequence.

Company CEO Elon Musk has not yet commented on the crash.