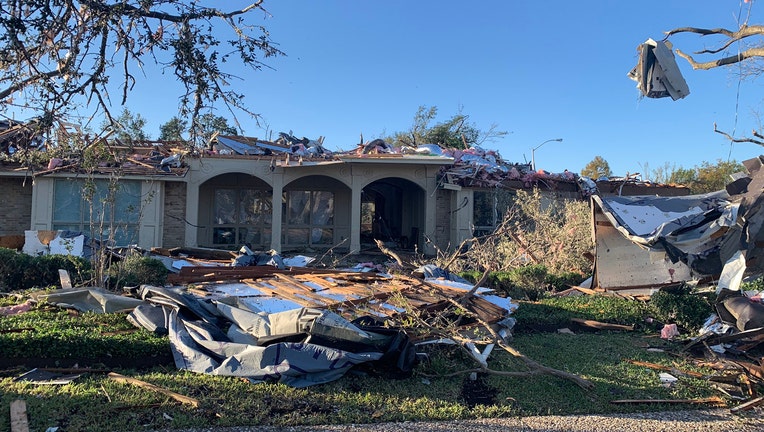 Three confirmed tornadoes hit North Texas on Sunday night, with the strongest being an EF-3 that struck North Dallas.

Despite the widespread damage, there were no fatalities and only a handful of injuries reported. The two other confirmed tornadoes were an EF-1 in Rowlett and an EF-0 north of Wills Point in Van Zandt County. National Weather Service officials fanned out across the region on Monday and were still working to assess the damage and evaluate other potential tornado strikes.

People are recounting the minutes before and after the tornado touched down in Northwest Dallas.

A Storm Prediction Center meteorologist said people took shelter thanks to early alerts, and that it was fortunate the tornado struck Sunday evening, when many people were home.

"Anytime you have a tornado in a major metropolitan area, the potential for large loss of life is always there," said Patrick Marsh, the warning coordination meteorologist at NOAA's Storm Prediction Center in Norman, Oklahoma. "We were very fortunate that the tornado did not hit the Dallas Cowboys' stadium or the State Fair, where you would have had a lot of people that were exposed."

Numerous Dallas ISD campuses were closed due to the storm on Monday. Officials later announced that three campuses -- Walnut Hill Elementary, Cary Middle School and Thomas Jefferson High School -- were heavily damaged and classes will be moved to other locations or students reassigned to other schools.

First responders said they believe Walnut Hill could be a total loss because of the water and gas leaks inside.

Thomas Jefferson High School was also hit by the tornado and significantly damaged. The school already had some construction work underway on the property and one of the construction trailers was ripped apart in the storm and flipped on top of a vehicle in the parking lot. District officials hope the campus can be renovated and re-open next fall. 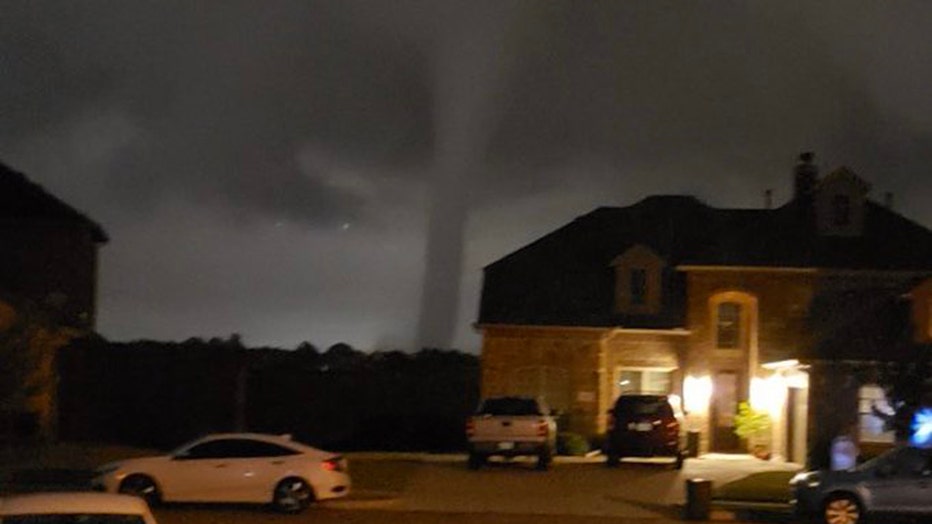 The tornado left a path of destruction with a significant amount of damage reported near Walnut Hill Lane in northwest Dallas.The storms destroyed several homes in the Preston Hollow neighborhood of Dallas.

“It’s overwhelming, you really don’t know what to do, where to start,” said resident Bill Callis.

One man who moved to North Texas after his home in Hawaii was destroyed by a volcano said the home he’s been renovating for his 89-year-old mother is gone now too.

Preston Hollow is among the most densely populated areas hit during the outbreak.

“We remodeled it for like eight months and we moved probably 90% of our stuff in and the curtains were gonna be hung today. And it was a new home for my mom who is 89. And we were fixing it up for her to walk in with the new shower and walk-in tub and all that stuff for her so,” said homeowner Kevin Fox. “It’s numbing. It’s crazy. I never thought I’d be one of those people picking through the debris field for pieces of stuff, you know.”

Fox said he’s not sure what he’ll do next. He’s had lots of family and friends offer to help but at this point the neighborhood is still too unsafe with all the tree limbs blocking the roads and downed power lines.

The man who owns this home said he'd been renovating it for the last eight months. He was planning to move his mother into her dream home this week.

At a Holiday Inn Express near Interstate 635 and Greenville Avenue, employees went door to door warning people to get to the lowest floor. One guest visiting from New Jersey was at the Cowboys game. She returned with no idea what had happened.

"We got the severe weather alert at the Cowboys game but we had assumed it just blew over. We didn't get any notifications on our phone so we just thought it was in that area and not up here," said Kari Taylor, whose hotel room was damaged.

Yodvadee Poekachaipatt, the hotel's manager, said after he got the warning he had all the guests come downstairs. A few minutes later, the building's windows were blown out. Guests were moved to a hotel a few miles away.

Part of Home Depot on Forest Lane near Central Expressway collapsed. Incredibly, no one was hurt.

The store’s manager said he saw the severe weather reports and sent most of the employees home early. He sent the last few employees home and closed up the store about 30 minutes before the tornado hit.

FOX 4's Brandon Todd reports live from the Lake Highlands neighborhood where a Home Depot was badly damaged. The store's manager said he sent his employees home early. About 30 minutes later, a tornado hit the building.

Several homes on Pemberton Drive near Royal Lane had their roofs ripped off. Trees were uprooted and tossed around and at least one SUV was lifted up from a driveway and overturned.

Jeff Nguyen said his children were upstairs when the tornado sirens started going off. He and his wife ran up to try to get to them.

“My wife kind of made it up the stairs, was trying to make it up the stairs first and then I guess that’s when the tornado maybe blew the roof off because the attic doors flew open and it pretty much threw her back down the stairs. I kind of pushed her down and got past her and got upstairs. My son was up in his bed with the covers over him. The window blew out and flew into the side of his bed. If he didn’t have a bunk bed I don’t know where it would have landed on him. But that probably saved him,” he said.

Nguyen’s house is now unlivable but he said the important thing is that everyone in his family is safe.

Meteorologists with the National Weather Service spent some time surveying the damage. They say it's amazing no one died.

“It was a really cool house. We had a lot of good times with the kids and the dogs,” he said.

Wengierski’s neighbors' homes off Royal Lane and Hillcrest are in varying levels of distress. Fallen oak trees and torn off roofs made it difficult to access the area.

“It feels like we’re a swarm of ants trying to make little tunnels seeing where we can get people in to do things, like restore a roof and get things covered up,” said Kristen Ainsworth, who helped clean up.

Four crews from the National Weather Service worked in teams of two to survey the damage to countless homes and businesses.

“We have software and guidelines that help us to determine the intensity demanding on the damage that we see,” said NWS Meteorologist Patricia Sanchez.

“The good news is no reports of any fatalities or major injuries, despite it impacting a widely populated area,” said NWS Meteorologist Chris McKinney. “So that’s always something that we’re very happy to hear.”

Diann took cover in a laundry room. With her windows blown and roof destroyed, she’s like many others patching up until they figure out what’s next.

“I’m having the house boarded and tarping. My friends came, and we swept and took as many valuables and locked it up and cleaned it up,” she said.

Until Thursday, the city says people should stay indoors in storm-affected areas from 7 p.m. until 7 a.m.

The city of Dallas says it’s aware of concerns about looting. Until Thursday, the city says people should stay indoors in storm-affected areas from 7 p.m. until 7 a.m.

Dallas police say they will step up patrols in the area.

“We’re actually going to be talking to police members about that,” he said.

Meanwhile, volunteers, friends and family are helping those hardest hit to pack up.

John McCormick’s house was leveled. He rode out the storm in his laundry room with his wife and two-and-a-half-month-old twin girls.

“We’re in the laundry room and the roof just lifts right up off of us,” he recalled. “So there’s debris, there’s glass and everything flying all over the place.”

Thankfully, they’re all okay. And as they work to secure valuable items, there’s a special understanding of what valuable really means.

“The moment you walk out of the room, it’s devastation here. Devastation there. So it’s kind of like the fact that I walked away, my wife walked away, both my dogs and my daughters walked away scot-free, like something special happened,” McCormick said.

Dallas police say in addition to using 911 to report crimes in progress, people can use the iWatchDallas app to report suspicious activity.

Pemberton Drive in North Dallas took the brunt of the damage from a tornado Sunday. One man who lives on the street believes a bunk bed helped save his son from flying debris.

Marek and Richard, a Dallas-based clothing maker that caters to the LGBTQ community around the world took a direct hit near Monroe and Walnut Hill.

Robbie Marek and another staffer were inside and ran to take cover after their cell phone sounded the warning.

"We definitely had to crawl out of the debris once it passed,” Marek said. “Luckily we weren't hit with any high beams, the crazy metal parts. That did fall near us but we were so thankful that it didn't puncture the dry wall.”

The damage is a major business setback, but Marek and others are grateful to be alive.

The roof was ripped off the Northway Church, an extension of The Village Church, on Walnut Hill Lane.

The pastor said it's a miracle no one was hurt. There were two members of the cleaning crew in the building when the storm hit. He asked people not to visit the church grounds right now because of safety concerns.

What may have been a tornado ripped the roof off a North Dallas church. FOX 4's Terrance Friday is at the Northway Church near Walnut Hill and Marsh lanes to see the damage.

Dallas Fire-Rescue’s Station 41 on Royal Lane near the Dallas North Tollway was almost completely destroyed. The roof is now gone and the walls are damaged. But thankfully no firefighters were hurt, officials said.

It's the second Dallas fire station to be damaged by storms this year. Station 19 was damaged in June.

In Garland, the storm knocked down trees and power lines. There was also debris on the road and the roofs on some homes were torn off.

“Once we got to our house, we noticed the roof’s got damage. All the windows are bashed in. Lots of debris from the new buildings on Shiloh in our backyard. A limb went right through the roof, through the ceiling, right where my daughter’s bed is. Could have been bad if she’d been in there,” said Dowell Buckner, who lives near Shiloh Road and Mockingbird Lane north of Interstate 635.

An EF-1 tornado hit Rowlett, but the city says its sirens did not work Sunday night.

A main part of the system was hit by lightning. The city said there were backup measures in place -- but the lightning strike was so intense that nothing worked. As of Monday morning, the siren has been repaired.

Dallas Mayor Eric Johnson said the city has opened the Bachman Recreation Center with the help of the Red Cross. The shelter will be open for anyone who was displaced by the storm, remains without power or needs help.

The Red Cross is assessing the need and is considering opening other shelters.

Oncor said there were about 50,000 homes and businesses without power in North Texas as of Monday evening. That's down from 100,000 on Monday morning.