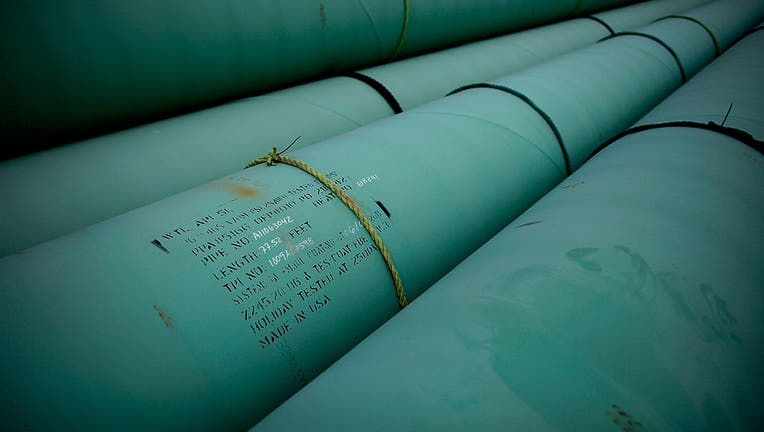 VASSAR, Mich. - The operator of a Michigan oil pipeline said it temporarily shut down Line 5 Tuesday after protesters warned the company that they planned to turn an emergency valve.

Video posted on social media showed someone with a hard hat and a wrench inside a fenced area in Tuscola County, 90 miles north of Detroit. A man outside the fence sang and played an electric guitar.

A sign warned against trespassing and said the property belonged to Enbridge Energy.

"We respect the rights of others to express their views on the energy we all use, but today’s pipeline tampering incident involving Enbridge was not a lawful protest. It was a criminal activity that put people and the environment at risk," said Enbridge spokesman Ryan Duffy.

He said the pipeline’s flow was temporarily stopped from a control center "out of an abundance of caution to protect communities, first responders, and the protesters."

The Tuscola County sheriff’s office referred questions to the state police, but there was no immediate comment. MLive.com posted photos of officers removing protest signs at the site.

A roughly 4-mile (6.4-kilometer) segment divides into two pipes that cross the Straits of Mackinac, which connects Lake Huron and Lake Michigan.

The pipeline has become highly controversial since Gov. Gretchen Whitmer and Attorney General Dana Nessel, both Democrats, were elected in 2018. They say Line 5 is a threat to the Great Lakes and should be closed to prevent spills.

Whitmer last year ordered the line closed, but Enbridge continues to operate it and plans to build an underwater tunnel to protect Line 5 and the lakes, under a deal made with the governor’s predecessor, Rick Snyder. Both sides are now in court.