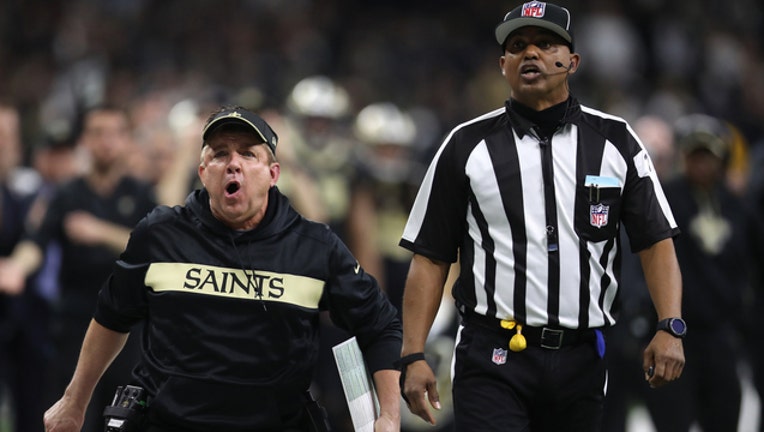 Head coach Sean Payton of the New Orleans Saints reacts against the Los Angeles Rams during the fourth quarter in the NFC Championship game at the Mercedes-Benz Superdome on January 20, 2019 in New Orleans. (Photo by Chris Graythen/Getty Images)

An eyecare business in Covington, Louisiana posted its offer on Facebook after the loss Sunday night.

"After having time to consider things we will GLADLY provide no cost eye exams to all NFL officials prior to next season to prevent the atrocity that occurred tonight. We would hate for someone else to feel our pain," Louisiana Family Eyecare posted.

An eyecare office in College Station, Texas is also extending the offer to NFL referees, it posted on Twitter, should they travel to Texas between now and the Super Bowl.

"In light of the atrocious lack of calls during the New Orleans Saints game, we would like to extend free eye exams and glasses to any NFL referee in need.  You know who you are," CrystalVisionCenter tweeted after the game.

After rallying from an early 13-0 deficit, the Rams stunned the New Orleans Saints with Greg Zuerlein's 57-yard field goal in overtime for a 26-23 victory in the NFC championship game Sunday - an outcome that might not have been possible without an egregious mistake by the officials in the closing minutes of regulation.

Los Angeles cornerback Nickell Robey-Coleman committed a blatant interference penalty with a helmet-to-helmet hit on Tommylee Lewis well before the pass arrived inside the 5, forcing the Saints to settle for Wil Lutz's 31-yard field goal that made it 23-20 with 1:41 left in regulation.

"Came to the sideline, looked at the football gods and was like, 'Thank you,'" Robey-Coleman said. "I got away with one tonight."

After the no-call, Jared Goff had enough time to lead the Rams down the field for Zuerlein's tying field goal, a 48-yarder with 15 seconds remaining.

New Orleans won the coin toss and got the ball first in overtime. But, with Dante Fowler Jr. in his face and striking his arm, Drew Brees fluttered up a pass that was picked off by John Johnson III, who was able to hang on to the interception while stumbling backward. Johnson hopped up and celebrated by doing the "Choppa Style" dance popularized by New Orleans rapper Choppa, whose namesake song had become a Saints' rallying cry and was even performed during the halftime show.

The Rams weren't able to do much offensively, but it didn't matter. Zuerlein booted through the winning field goal from just inside midfield with plenty of room to spare. The NFL said it the longest game-winning kick in playoff history.