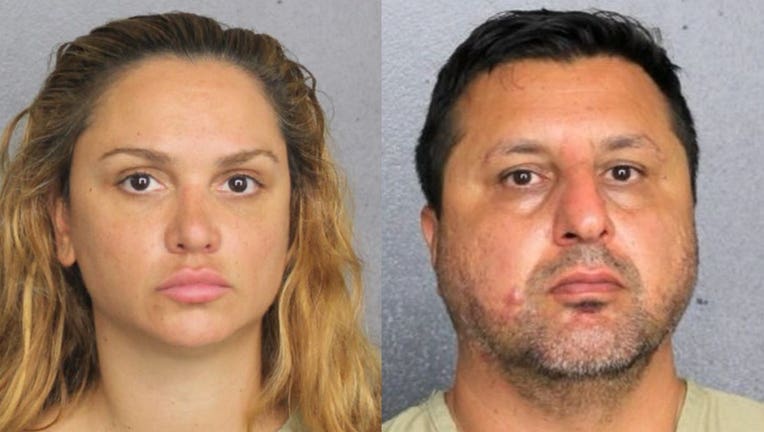 LOS ANGELES - Family members of a San Fernando Valley couple whom the FBI believes cut their tracking bracelets and went on the run while awaiting sentencing for their roles in an $18 million COVID-19 relief fraud case contend the pair were kidnapped -- apparently to prevent them from disclosing the identities of unindicted co-conspirators, court papers obtained Friday show.

The FBI is offering a reward of up to $20,000 in exchange for information leading to the arrest of Richard Ayvazyan, 43, and his wife and co-defendant Marietta Terabelian, 37.

Federal authorities believe that the couple, facing the possibility of years behind bars, removed their location monitoring devices and absconded from pretrial supervision together on Aug. 29. The following day, a Los Angeles federal judge signed bench warrants for the couple's arrest.

Defense lawyers wrote in recent filings obtained by City News Service that family members of the couple believe Ayvazyan and Terabelian were abducted and did not voluntarily abscond from their Tarzana home.

Tarzana couple on the run

The FBI's hunt continues for a Tarzana couple who allegedly cut their ankle tracking bracelets and went on the run while awaiting sentencing for their roles in an $18 million COVID-19 relief fraud case.

Based on such concerns, attorneys for the missing couple are asking the government to permit inspection of a purported video that could show Ayvazyan and Terabelian voluntarily returning to the home on Sept. 2, several days after they disappeared from supervision.

If the couple is not seen on the purported video, "then there is no reliable evidence of voluntary flight. It is not credible to assert that Ayvazyan and Terabelian would have voluntarily fled without leaving any traces such as use of credit lines, electronic accounts, or vehicles," Ayvazyan attorney Ashwin J. Ram wrote.

The attorney is asking that the court not only allow the defense to view the video but place on hold the Nov. 15 sentencing hearing "unless and until it can make formal findings of involuntary abduction, voluntary flight, or other disappearance."

Representatives of the FBI and U.S. Attorney's Office did not immediately respond to requests for comment outside of regular business hours.

The couple and two relatives were found guilty in June of scheming to submit fraudulent loan applications under which they and others obtained more than $18 million in Paycheck Protection and Economic Injury Disaster Loan program funds, which they used to put down payments on luxury homes in Tarzana, Glendale and Palm Desert, and to buy other high-end items such as gold coins, diamonds, jewelry, luxury watches, imported furnishings, designer handbags, clothing and a Harley-Davidson motorcycle.

Prosecutors have requested sentencing enhancements for the alleged escape from supervision and because many of the scheme's victims were considered "vulnerable."

Ayvazyan "victimized elderly persons (including those with disabilities), deceased persons and foreign exchange students who had spent only a few months in the United States years ago and now lived thousands of miles away in a foreign country," federal prosecutors wrote.

The jury determined the defendants must forfeit bank accounts, jewelry, watches, gold coins, three homes and about $450,000 in cash, according to the U.S. Attorney's Office.

Evidence showed the defendants used bogus or stolen identities to submit fraudulent applications for the loans. In support of the applications, the defendants also submitted sham documents to lenders and the Small Business Administration, including fake identity documents, tax documents and payroll records.

Prior to the verdict, four accomplices pleaded guilty to criminal charges in the case.