UTICA, Mich. (FOX 2) - Loved ones held a vigil Sunday night in remembrance of Mike Shereda, a grandfather who was stabbed to death at a park during his grandchild's first birthday party.

The stabbing happened Sept. 1, 2018, at Grant Park off Hahn Street in Utica. The suspect, Miquel Mansour, is still awaiting trial and Shereda's family is hoping Mansour is convicted and sentenced for first-degree murder.

Family rallying for justice after grandfather stabbed to death at park

The family of Mike Shereda is waiting for justice after he was stabbed dozens of times at a park in Utica.

Family and friends huddled together Sunday night at the pavilion in the same park where Shereda was killed.

Officials say while celebrating his grandchild's birthday, Shereda noticed a man acting suspiciously and doing drugs at the park. Shereda asked the man to leave and he apparently went into a rage. Shereda was stabbed more than 50 times in front of his family and friends in the middle of the public park.

"The city of Utica grieves with the Shereda family. Michael was a good man trying to do the right thing," Utica mayor Thom Dionee said at the vigil.

Mansour has been charged and his trial is not expected to begin until January 2020.

Meanwhile, his family is hoping Mansour will be held criminally responsible. They're asking the judge not accept any plea deal that would lead to a lesser sentencing.

"Let's stand together and make an example out of my dad's murder. Show others that you will be punished to the fullest, that we do have consequences for our actions," Angela Shereda said. 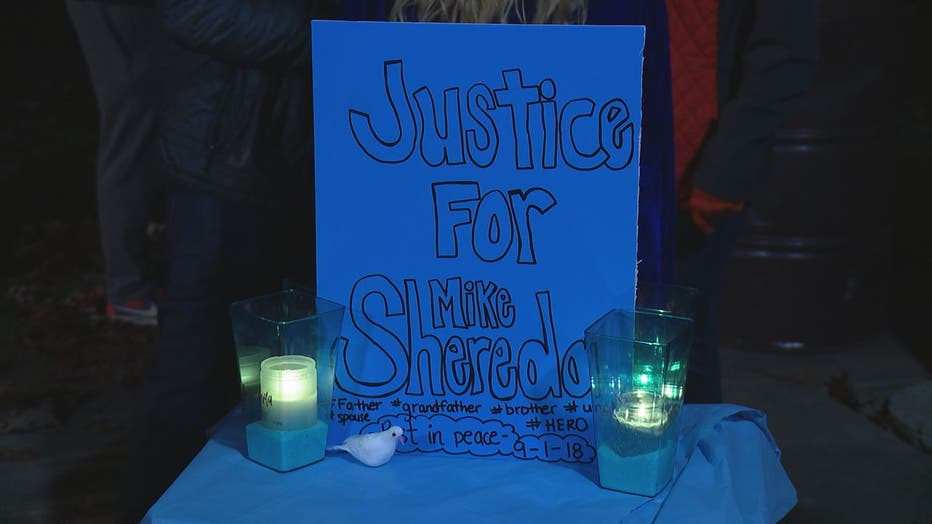 Police say the grandfather was an auto designer who was described as friendly and always spent time with his grandchildren. Shereda is a father of six and has 17 grandchildren and two great-grandchildren. His daughter says he was a family man and an avid outdoorsman.

"That's like the one thing people knew about him - even if they didn't know him at all - they knew his smile and his laugh. I'm just beyond grateful. I don't even have enough words to thank people," Angela said.

You can read more about the family's petition against Mansour online here.