In court today a video was shown which was recorded by an undercover FBI agent in Wisconsin at a training session for the militia.

The judge went through the entire day with five defense attorneys, each one representing a defendant accused in the plot.

There are some differences, but this hearing is just a prelim to determine if the case is strong enough to move forward to a trial. There was testimony about militia and plans for a "boogaloo" which is a civil war to overthrow the government.

The allegation by the prosecutor is that these five suspects wanted to overthrow the government also There were many plans do not only kidnap the governor, but another was to, allegedly, even shoot her.

In court today a video was shown which was recorded by an undercover FBI agent in Wisconsin at a training session for militia.

"The takeaway from the meeting was a three-phase plan," said the coordinator of the FBI's investigation. "The initial phase was recruitment and networking. The second phase was attack-planning, each individual boogalo leader from their state, was supposed to come up with the best attack plan for the group and finally, the third phase, was the actual attack."

The agent read from the alleged plan: "'Catch her walking into the building and act like passers-by, fixing dome her then yourself, whoever does it. Emoji.'"

Prosecutor: "Can you stop for a second? What does 'Fixing dome' mean ?"

"It means shoot her in the head," the agent said.

On Monday the court proceedings only got through one witness and his testimony is not done yet.

The hearings are being held in Antrim County because the governor's summer residence is in Birch Lake, which is there.

There are some similarities between the federal trial in which two people were recently convicted - Adam Fox and Barry Croft - and the current cas against five defendants. Fox and Croft were said to have played major roles as kind of the ringleaders of the militia group that these five are a part of. 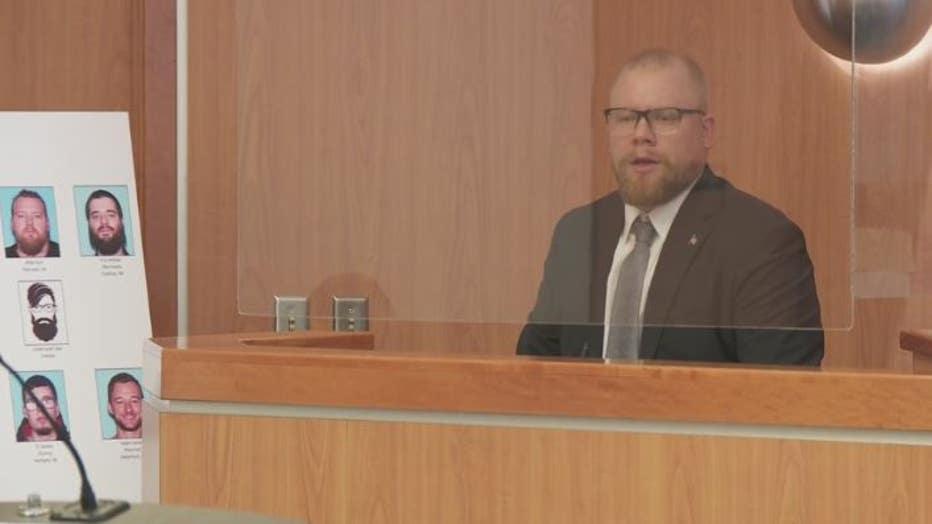