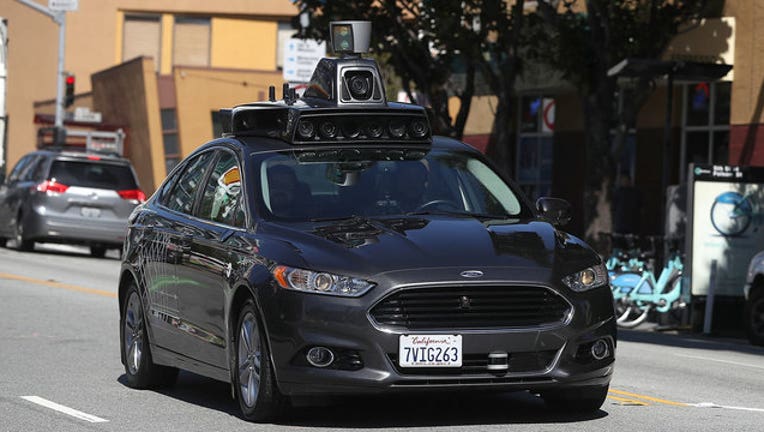 An Uber self-driving car drives down 5th Street on March 28, 2017 in San Francisco, California. Cars in Uber's self-driving cars are back on the roads after the program was temporarily halted following a crash. (Photo by Justin Sullivan/Getty Images)

DETROIT (AP) - The autonomous Uber SUV that struck and killed an Arizona pedestrian in March spotted the woman about six seconds before hitting her, but did not stop because the system used to automatically apply brakes in potentially dangerous situations had been disabled, according to federal investigators.

In a preliminary report on the crash, the National Transportation Safety Board said Thursday that emergency braking is not enabled while Uber's cars are under computer control, "to reduce the potential for erratic vehicle behavior."

Instead, Uber relies on a human backup driver to intervene. The system, however, is not designed to alert the driver.

The findings, which are not final, should be a warning to all companies testing autonomous vehicles to check their systems to make sure they automatically stop when necessary in the environment where they are being tested, said Alain Kornhauser, faculty chairman of autonomous vehicle engineering at Princeton University.

Uber, he said, likely determined in testing that its system braked in situations it shouldn't have, possibly for overpasses, signs and trees. "It got spoofed too often," Kornhauser said. "Instead of fixing the spoofing, they fixed the spoofing by turning it off."

A video of the crash showed the driver looking down just before the vehicle struck and killed 49-year-old Elaine Herzberg.

Uber said in a company release that it has worked closely with the NTSB and is doing an internal review of its self-driving vehicle program. The company also has brought in former NTSB Chairman Christopher Hart as a safety advisor. "We look forward to sharing more on the changes we'll make in the coming weeks," the release said. The company declined further comment.

The report comes a day after Uber pulled its self-driving cars out of Arizona, eliminating the jobs of about 300 people who served as backup drivers and performed other jobs connected to the vehicles. Uber had suspended testing of its self-driving vehicles in Arizona, Pittsburgh, San Francisco and Toronto while regulators investigated the cause of the March 18 crash.

Sensors on the fully autonomous Volvo XC-90 SUV spotted Herzberg while the car was traveling 43 miles per hour and determined that braking was needed 1.3 seconds before impact, according to the report.

A diagram in the NTSB report shows that the Uber system determined that the SUV needed to brake when it was at least 20 meters (65.6 feet) from Herzberg; it was traveling 39 mph (63 kilometers per hour) at impact. Kornhauser said that was enough distance for the SUV to stop, or slow considerably to mitigate damage from the crash.

Herzberg was pushing a bicycle across a boulevard in the darkness when the crash occurred on a part of the road that had no crosswalk and was not lighted, the report said.

She was wearing dark clothing and did not look in the direction of the vehicle until just before impact. A toxicology report showed that she tested positive for methamphetamine and marijuana, according to the NTSB. Also, the bicycle had no side reflectors and the front and back reflectors.

Uber also disabled the Volvo's factory-equipped automatic emergency braking system when the vehicle is in autonomous mode, the report said.

In an interview with the NTSB, Uber's backup driver said she had been monitoring the "self-driving interface." While her personal and business telephones were in the vehicle, she said neither was in use at the time of the crash.

The NTSB said that all other aspects of the SUV's self-driving system were running normally at the time, and there were no faults or diagnostic trouble messages.

The agency, which can make safety recommendations to other federal agencies, said information in the preliminary report can change as the investigation progresses and that no conclusions should be drawn from the report.

Tempe police turned their investigation over to prosecutors on Wednesday.

Amanda Jacinto, a spokeswoman for the Maricopa County Attorney's Office, said no decision has yet been made on charges against the driver or the ride-sharing company. She wouldn't comment on the NTSB report.

No deadline has been set by the prosecutorial agency for deciding whether to bring charges, though typically those decisions are made within 30 days after getting cases from police, Jacinto said.