DETROIT (FOX 2) - The late Congressman John Conyers' voice played in a recording by his wife Monica at his funeral Monday.

"Following your heart, doing what your conscious tells you is right and trying to make this a better place," he said.

The longest-serving black congressman in U.S. history told us all to keep *fighting for what's right."

"We're losing too many giants and men and women who've been mentors and inspiration," said Rep. Debbie Dingell. "Those who taught us how to make a difference, to stand up for what's right, and to do right requires more than words, it requires action."

In 1967 when Detroit was burning, he called for calm.  Detroit's love affair with the congressman maybe began there.

"I can recall when he would ask me to come to Detroit to campaign for and with him," said Rep. Maxine Waters. "I would come and then I would say to John, 'Why did you waste my time. Why did you want me to come? You are loved dearly in the city of Detroit, Michigan. You didn't' need me.'"

Conyers' support was impenetrable - even after his wife went to prison for taking bribes. Conyers was often elected with more than 80 percent of the vote. The city never forsake him.

"Reverend Jesse Jackson leaned over and said, 'Negroes from Detroit, love being from Detroit,'" said professor and author Michael Eric Dyson, himself a native Detroiter. "Yeah we do. And John Conyers represented Detroit.

He hired Civil Rights icon Rosa Parks to work in his district office until she retired.

"He probably never got a vote out of it," said President Bill Clinton. "But it's something to me that said as much about who he was, what he believed in and cared about, as anything he ever did."

Conyers was a legendary congressman, husband and father.

"You could tell how much he cared about us," said his son Carl Conyers. "And he always showed it."

Lt. Governor Garlin Gilchrist made this point, that there were so many young people inspired by Conyers the man but by what he portrayed to the world giving them agency and ideas.  I am someone who interned for the congressman for a short time like thousands across metro Detroit. We were given an opportunity and now we stand on his mighty shoulders. 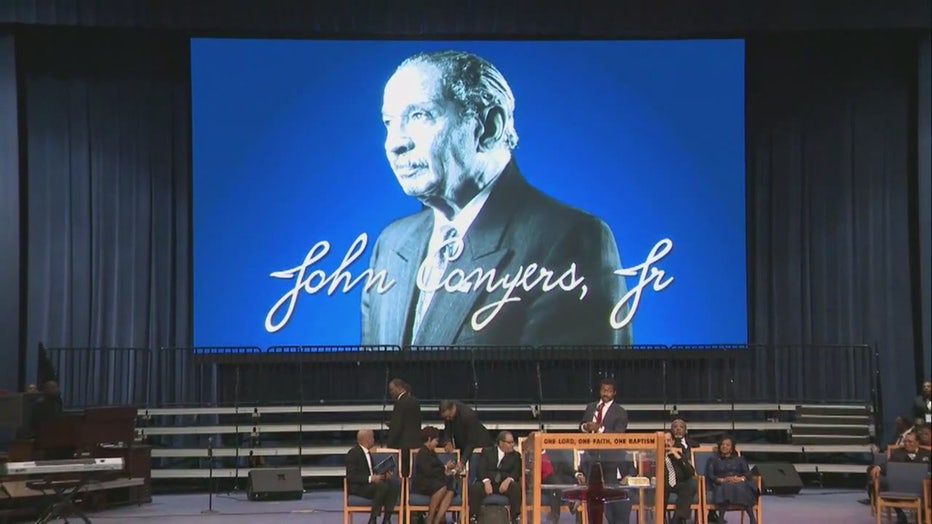