The water system has tested below action levels of the federal Lead and Copper Rule during 10 consecutive monitoring periods since July 2016.

According to EGLE, the latest six-month monitoring period from Jan. 1 through June 30 shows that 90% of the samples collected are at 3 parts per billion under a new, stricter state rule that requires a fifth-liter sample to better reflect the impact of lead service lines.

The most recent test results were calculated from samples taken from 71 homes, apartment buildings, and businesses known to have lead service lines. Flint officials expect to have all remaining lead service lines replaced before the end of the year. 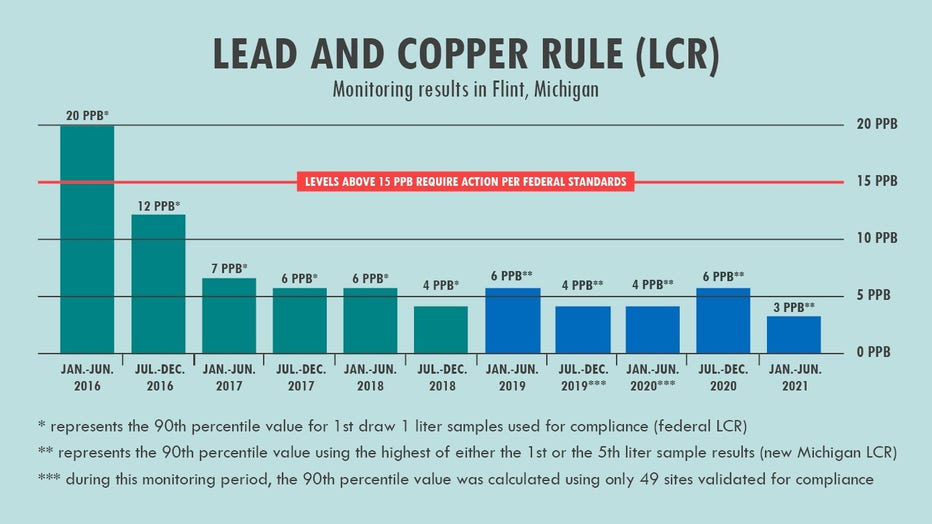 "The people of Flint deserve safe, clean drinking water," said EGLE director Liesl Clark. "I'd like to be the first to congratulate the mayor and city staff for reaching this important milestone. EGLE remains committed to protecting residents from lead exposure by working collaboratively with the city to reduce and ultimately eliminate sources of lead in their drinking water system."

EGLE and the city also monitor other water quality measures such as residual chlorine and orthophosphate levels and confirm they are being managed effectively.

"This speaks to the significant progress we have made in water safety for the city of Flint," Mayor Sheldon Neeley said. "Water is a human right and providing quality water is a humanitarian effort that we all must work toward. We will continue to move our community forward in a positive direction. Together we rise."