LAKE ORION, Mich. - Dylan Kade's strength has always been something to marvel at. From training for the World CrossFit games at age 15 to taking his talents to the Bloomfield Hills Fire Department a few years later, his motivation to get stronger has been remarkable.

Which is why Dylan's recent hospitalization from an unexplained illness paints such a stark image.

"Right now, he's on a ventilator and he's basically in a coma," said his brother Chris.

Dylan used to spend his days pulling weights up and down the street and doing handstand pushups. It was a good leg workout in preparation for serious training on the world stage. That was in 2016.

From training for the World CrossFit Competition to preparing to be a Bloomfield firefighter, Dylan Kade has always excelled at what he put his mind to. Then an unexplained illness hospitalized the Lake Orion teen as his family struggles continued to mount. A fundraiser to help buoy the family's finances will be held at C-pub in Canterbury Village from 6-9 p.m.

Dylan's decline began years later when he developed a really bad headache and couldn't eat. For the boy that was always consuming something, that was a sign that something was really wrong.

"He had a really bad headache and he couldn't eat and my brother is always eating - he's always working out and feeding his body so we knew something was up because he had a really high fever," Chris said. "His fever was spiking at 103."

He eventually ended up in critical condition at the University of Michigan. His brain swelled up and doctors were unsure what had caused the infection.

In late June, only days before getting sick, the 19-year-old had been training to be a firefighter.

Now his mom is spending all her time with him at the hospital while Chris takes care of their dad Irv. Irv has early-onset Alzheimers, which requires a lot of medication that Chris is responsible for him taking.

The health concerns that have rippled through the family has forced Chris and his mom to take on familial duties.

"She's hanging in there, she's the toughest woman I know, so she'll always persevere, but it's a tough time," said Chris who is a nursing student himself at Oakland University. Blessed with the opportunity of learning how to care for others while taking on the duty himself has left him inspired to pursue the career even more. 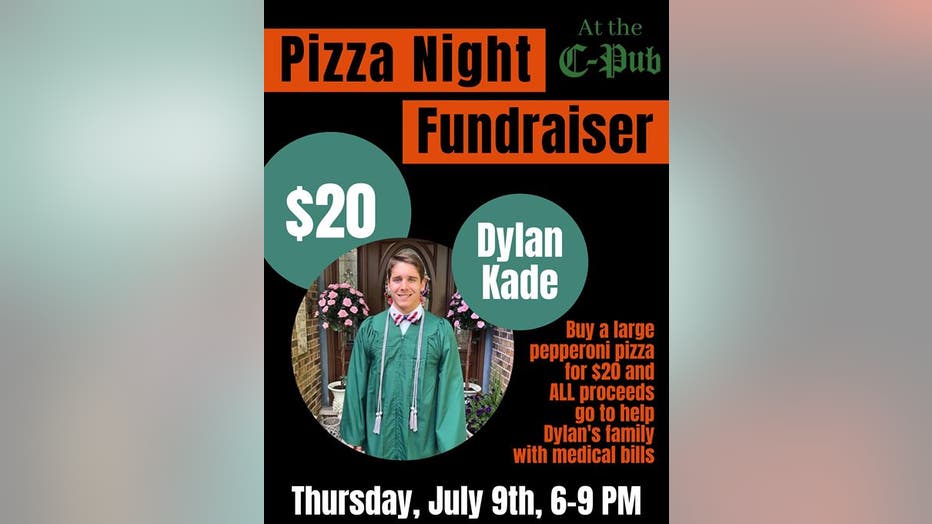 "It's making me look forward to my career even more because I see how great my brother's nurses have been and they've treated us amazingly and treated my brother amazingly and given him great care and I strive to do that someday," he added.

Because Irv Kade can't work and their mom Mary Kay is a hairstylist, money has been tight for the family. They're hosting a fundraiser in Canterbury Village at the C-Pub from 6-9 p.m. The entirety of the $20 it costs to attend will be donated. For anyone that can't attend, they're welcome to donate to a Gofundme set up for Dylan.

You can find it here.