NORTH PORT, Fla. - Gabby Petito’s family gathered Tuesday to thank law enforcement for their efforts to find their missing loved one and showed off matching tattoos in her memory. But with the hunt for her fiancé still underway, they had one message for Brian Laundrie: "Turn yourself in."

Laundrie, 23, has not been seen in at least two weeks. His parents – Chris and Roberta Laundrie – told North Port police he went to the Carlton Reserve in Sarasota County with only a backpack and disappeared. The search continued even as the Petito family gathered 1,200 miles away in New York to discuss their next steps.

"The Laundries did not help us find Gabby. They sure aren’t going to help us find Brian," attorney Richard Stafford said. "For Brian, we are asking you to turn yourself in."

Gabby Petito's family and their attorney announce the creation of the Gabby Petito Foundation as they look ahead to what's next after her death.

Gabby's family announced plans to create the Gabby Petito Foundation as a way to take something positive from her case.

"We can’t let her name be taken in vain," said Gabby's father, Joseph. "We need positive stuff. Anything we can do to bring that up and help people." 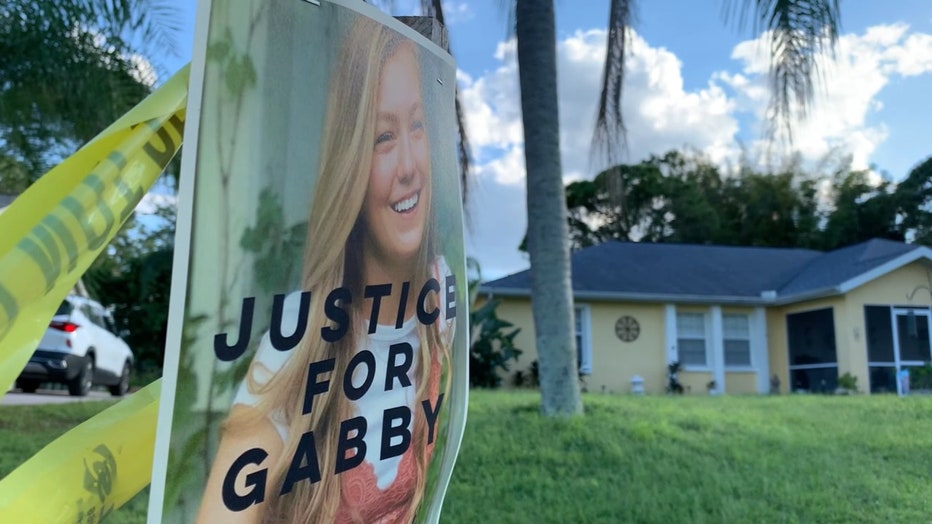 A 'Justice for Gabby' sign outside the Laundrie family home in Florida.

Stafford said the family was "100%" satisfied with the FBI investigation, while Joseph said social media has also been "very influential" in the investigation.

"To be honest, it should continue for other people too," he offered. "This same type of heightened awareness should be continued for everyone."

New details in timeline of Brian Laundrie after return to Florida

New details, confirmed by the family’s attorney Tuesday, help flesh out Brian Laundrie’s timeline after his return to Florida but may not necessarily shed any new light on where he is right now.

"When they are ready to release her, we will be bringing her home," he added.

The family members all showed matching tattoos they had gotten in honor of Gabby. "Let it be" was written on their arms – each a copy of a tattoo Gabby had.

"We can’t let her name be taken in vain. We need positive stuff. Anything we can do to bring that up and help people."

Yesterday, the Laundrie family released a statement of their own. In response to the criticism they’ve faced over their refusal to help law enforcement while Gabby was still missing and the accusation that they’ve helped their son escape, their attorney said Brian’s parents do not know where he is, and that speculation they assisted him in leaving the family home or in avoiding arrest is just wrong.

"Chris and Roberta Laundrie do not know where Brian is. They are concerned about Brian and hope the FBI can locate him. The speculation by the public and some in the press that the parents assisted Brian in leaving the family home or in avoiding arrest on a warrant that was issued after Brian had already been missing for several days is just wrong," attorney Steven Bertolino said in the statement.

Brian Laundrie's parents claim no knowledge of his whereabouts

The parents of Brian Laundrie, the only person of interest named in the disappearance of Gabby Petito, say they do not know where their son is.

MORE: Brian Laundrie's parents 'concerned' but 'do not know where Brian is,' family lawyer says

After days of intensive searching, authorities scaled things back in the Carlton Reserve, now relying primarily on aerial surveillance.

FOX News spoke with a local cattle rancher who’s been part of those search efforts. He’s spent 30 years riding the swampy terrain, saying he doubts anyone could survive more than a few days there.

"There’s no surviving out here, I don’t know how to say it," said Alan McEwen. "I’ve been in the woods in and out all my life … I have learned a lot in my life, and one thing I know is no one is gonna survive out there for two weeks on foot."

The FBI has taken over all aspects of the Laundrie case. They’ve gathered DNA from his home to use in order to match to any remains or items they may find

Search efforts at the Carlton Preserve for the only person of interest in Gabby Petito's case slowed over the weekend. North Port police had been heading the search at the Carlton reserve, with help from law enforcement agencies from across the state and the FBI.

Brian and Gabby went on a cross-country trip in her Ford Transit van back in late June. In mid-August, the two had a run-in with police officers in Moab, Utah, after the couple got into a physical altercation outside of the Moonflower Market.

Gabby's mother says the last time she's sure she spoke to her daughter was August 25, when Gabby told her mother she and Brian were headed to Grand Teton National Park.

"I don't know if she left Grand Teton or not," Nicole Schmidt later told FOX News.

However, on Aug. 27, Schmidt said she got a text message from Gabby's phone, but she is not convinced the message was from her daughter.

On September 1, Brian arrived back at his parents' house in North Port, Florida, driving Gabby's van. Gabby was also living there, but she was nowhere to be found. She was reported missing by her parents Saturday, Sept. 11. Her remains were later discovered in Grand Teton National Park.

On Tuesday, September 14, Brian left his parents' home, driving his silver Ford Mustang and carrying a backpack, to go camping near the Carlton Reserve, according to his parents. Brian's car was brought back to the Laundrie's home from the reserve that Thursday, His parents reported him missing Friday, Sept. 17.

Immediately after Brian was reported missing, a search of the 25,000-acre reserve began, involving agencies from the North Port Police Department to the FBI.

Florida cattle rancher Alan McEwen has spent nearly every day of the last 30 years navigating the woods where Brian Laundrie is suspected of hiding and says it is not conducive to habitation.

Meanwhile, investigators continued to try to develop leads in the case and Brian's whereabouts.

On Sept. 20, FBI agents hauled carloads of evidence from the Laundrie home as the search at Carlton Reserve expanded to include dogs, airboats, ATVs, and aircraft from multiple agencies.

During the search's fifth day, the FBI issued an arrest warrant for Laundrie for charges "related to Mr. Laundrie’s activities following the death of Gabrielle Petito," specifically his "unauthorized" use of a debit card in the wake of Petito’s death. A North Port law firm also announced a $20,000 reward for information leading to Laundrie's location.

Gabby was not reported missing until 10 days after Brian's return to North Port. Her mother filed a police report in Suffolk County, N.Y. Police seized the van from the Laundries' home on Sept. 11.

The remains were discovered Sept. 19 in the Bridger-Teton National Forest after a national search for the 22-year-old. Video captured by a vacationing Tampa family accidentally caught what appeared to be the couple's van parked at the Spread Creek Dispersed Camping Area in the forest; Gabby's body was later found nearby.

'Just to be clear, Gabby had four parents,' her father, Joseph Petito, said at the beginning of Sunday's funeral services for his daughter. Joseph and her stepfather, Jim Schmidt, spoke at the start of the service, recalling and describing Gabby, saying she had a positive spirit. After, Joseph and Jim hugged each other.

A coroner confirmed that a body found Sunday in Wyoming was indeed Gabby. They said the manner of death was homicide. The exact cause is still being determined.

One week after Gabby's remains were discovered in Grand Teton National Park, a funeral service and memorial was held in Long Island.

Brian was later named a person of interest in her disappearance.

Anyone with information regarding Gabby's disappearance or Brian's whereabouts is asked to call the FBI national hotline at 1-800-225-5324 or submit tips to tips.fbi.gov.