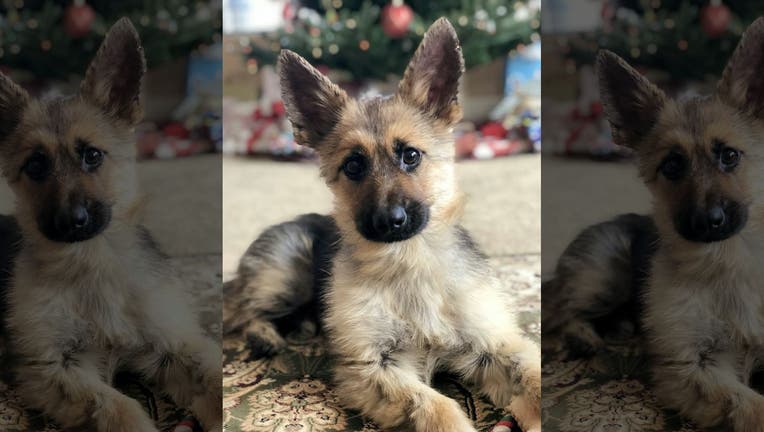 PHOENIX - A purebred German shepherd will forever be the size of a pup due to a rare genetic condition.

Ranger, 2, has “pituitary dwarfism,” a genetic condition that primarily affects German shepherds, but can also affect such breeds as the Saarloos wolfdog and the Karelian bear dog.

Ranger’s owner, Shelby Mayo, told British news agency SWNS that she knew the dog might end up smaller than other German shepherds; he was apparently the runt of his litter.

“When we originally got Ranger from the breeder, he was smaller than all his other littermates, but we figured that was because he had a parasite called Coccidia,” said Mayo, of Phoenix.

Ranger was treated for the parasite, but he later contracted another parasite — Giardia — and developed an infection on his neck.

''During this time Ranger remained very small, the vet had suspected that he may have pituitary dwarfism, a genetic mutation,” she said. “But we were still skeptical as this condition is very rare.”

A few months later, Ranger was neutered, after which time “we started to see big changes,” Mayo said. Ranger began to suffer from weight and hair loss, as well as dry and flaky skin — more signs of the condition, as dogs with pituitary dwarfism often experience “skin and hair abnormalities,” per ScienceDirect.

One of Ranger’s nearly 70,000 followers on Instagram who also has a German shepherd with dwarfism warned the owner that the dog may be suffering from low thyroid levels, not uncommon in dogs with the condition.

“So our vet checked his thyroid levels and sure enough he was low. This can cause hair loss and a loss of appetite,” said Mayo, noting that medication and a special soap remedied the condition.

Though dogs with pituitary dwarfism are more prone to health issues and typically have shortened lifespans, Mayo told SWNS that Ranger is “healthy and happy as can be as of now” and enjoys playing with her two other dogs,  Hazel and Jessie.