That's what a billboard just south of I-96 near Telegraph in Redford Township reads between 7 a.m. and 8 p.m. At first glance, the message appears to be nothing more than a happy endorsement of a city.

But the message is actually a reaction to another billboard that turned heads a could weeks ago. Those heading down the interstate might remember more pointed words flashing in front of them: "Driving while Black? Racial profiling just ahead. Welcome to Livonia."

Penny Crider, a Republican candidate running for state representative from Livonia was in Allen Park on Monday when she defended her stance on law enforcement and policing in the city.

"Do we have problems, like any community? Sure. I'd be lying if I said no, but we work really hard to make it a good community," she said.

A Republican candidate running for state representative in Livonia has waded into a billboard battle that's been taking place over I-96 with her own message of support for law enforcement. A previous billboard sign showed

However, messages posted like the one that started appearing July 7 that alleged racial profiling in the city are unfair and don't approach the problem in the best way, Crider says.

"We just felt like it was kind of a malicious slam on our community and we really wanted to represent the community in a more positive way which is the way we see it," she said.

That's not how the group Livonia Citizens Caring about Black Lives (LCCABL) feels about it.

"We have to stop denying that there are people who live here, who drive through here, who have different experiences than we do," said Delisha Upshaw. "So I say stop denying and start trying."

Upshaw and Crider are the latest personalities to wade into not just a battle of billboards, but a cultural debate that has thrown much of the country into unrest. Killings alleged to be racially-charged in Minnesota and Georgia have sparked massive protests and likely inserted race at the forefront of many political races and local conversations.

Both have converged on Livonia. 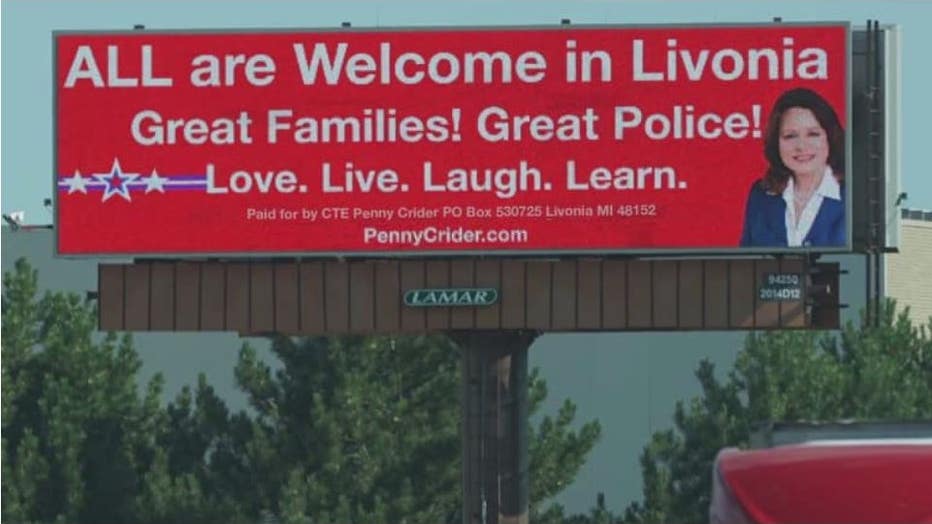 GOP candidate Penny Crider's billboard, located south of I-96 near Telegraph, which shows up between 7 a.m. and 8 p.m.

Upshaw is part of LCCABL, whose Facebook group was created shortly following the death of George Floyd. After their billboard went up, the Livonia Police Department's Facebook page shared a note pushing back on the accusation of racial profiling. "Livonia is a welcoming community to all regardless of one's race. This billboard sends the exact opposite message of our values at the Livonia Police Department and of those in our community."

Crider's billboard was first posted on July 24 and plans to run for the next couple of weeks. She also said that she would be open to addressing any problems brought forth by the community.

"You want the community to be very welcoming to everybody so if there is a problem, then, of course, we want to address it," said Crider. "I think it's very important that we have a conversation about this issue and about many other issues. But when we do that, we have to be willing to talk and not come in and not attack one another."

"This is not about billboards, it's not about Republicans or Democrats, black or white, but it really is about humanity and that empathy that you need in your heart in order to listen to someone's story," said Upshaw.

Crider is running for a seat in the 19th District, against two other GOP candidates in the August Primary next week.