LIVONIA, Mich. (FOX 2) - A bold new billboard offers a greeting and a warning to drivers heading to Livonia is turning heads. It reads, 'Driving while Black? Racial profiling just ahead. Welcome to Livonia.'

The sign is funded by the Facebook group Livonia Citizens Caring about Black Lives and the group says they're calling attention to the problem of racial profiling in Livonia, a predominantly white city.

An activist group in Livonia is hoping to see police stop data after erecting a bold billboard accusing the Livonia police of racial profiling.

The sign is expected to be put up on Monday and will occupy a billboard on Telegraph, south of I-96 in Redford. The group chose to post the sign in nearby Redford Township because the City of Livonia does not allow billboards.

The newly-formed group is demanding change, alleging Livonia police have engaged in racial profiling for years.

"We want to know how we're policed," said Delisha Upshaw, a member of the group responsible for the billboard.

"If you drive down Plymouth they look for black people. They target black people," one concerned citizen who didn't want to be named said to us. "If they see a black person passing by they get behind them and check their plate even if you're not speeding." 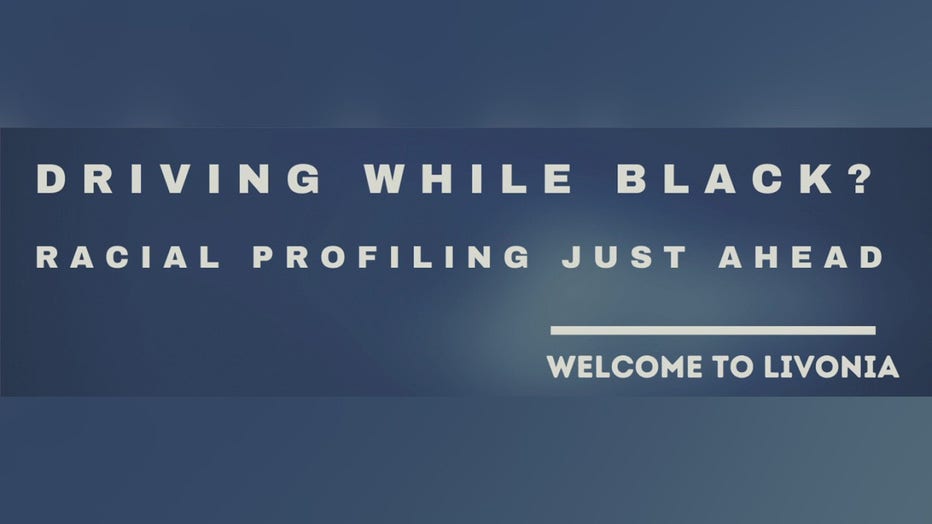 "We know it makes people uncomfortable, I mean I was uncomfortable with it. I live here. But it is what is happening and we're open to [seeing] data that shows otherwise," Upshaw said.

The citizen group is asking for data on traffic stops in the city. They say other requests made my concerned citizens for this same information goes back to 2019.

"We've asked for a traffic stop data that includes race, initial reason for the stop and then the outcome of the stop," Upshaw said. "They released information, we pushed back like, this isn't clear. This does not match with what we have. The policies that we received have pages missing."

FOX 2 reached out to city officials and the city police chief  Curtis Caid provided a statement which reads in part:

"Livonia Police officers do not target their enforcement actions to individuals based on gender, race, religion or ethnicity. Racial profiling is a serious allegation and is not tolerated. This billboard sends the exact opposite message of our values at Livonia Police Department and of those in our community."

But this community group believes the billboard will drive the change they want in the city.

"We'd like to see them release the data. And my guess is that it won't be pretty but that's okay because we can work on changing it," Upshaw said.